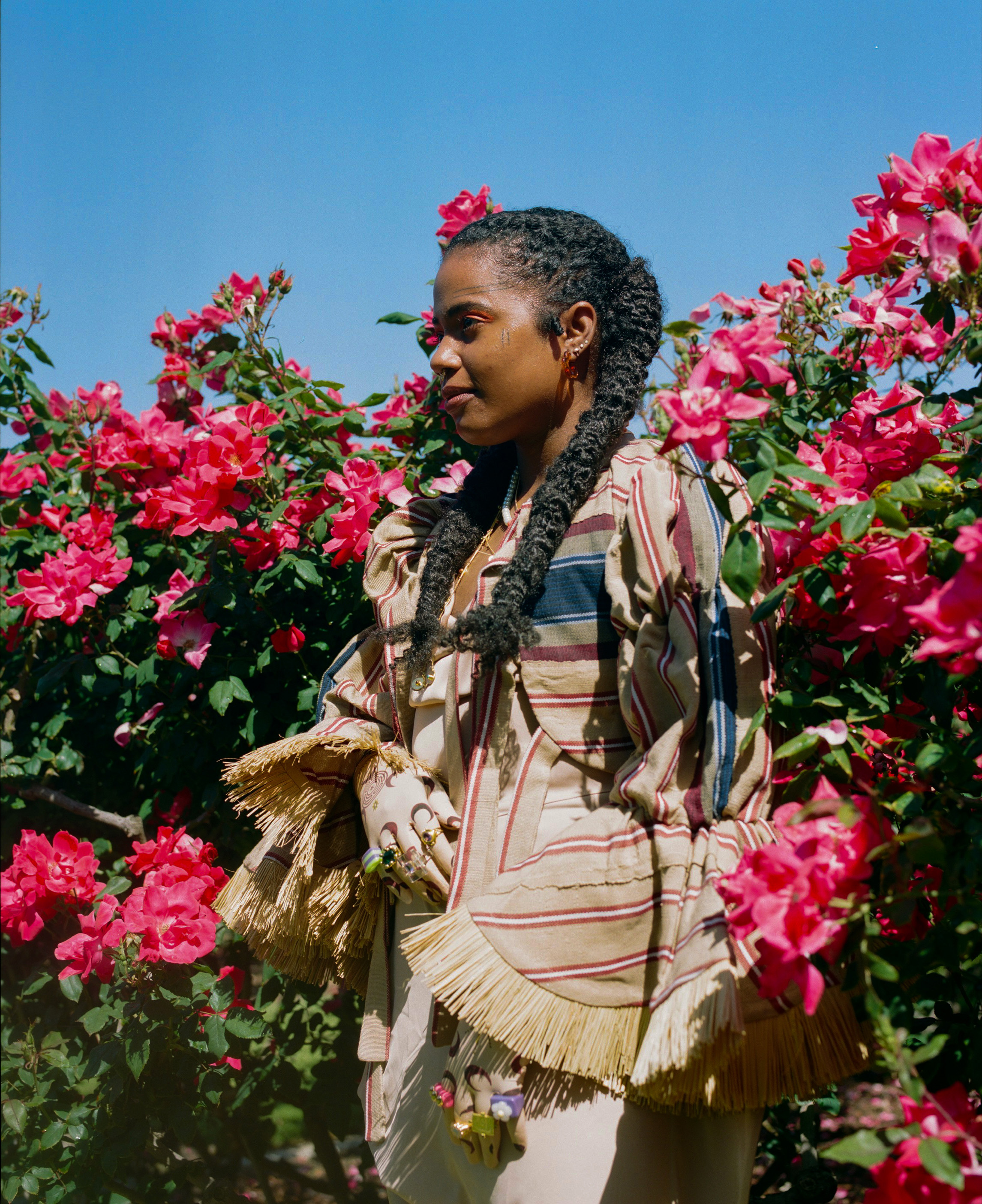 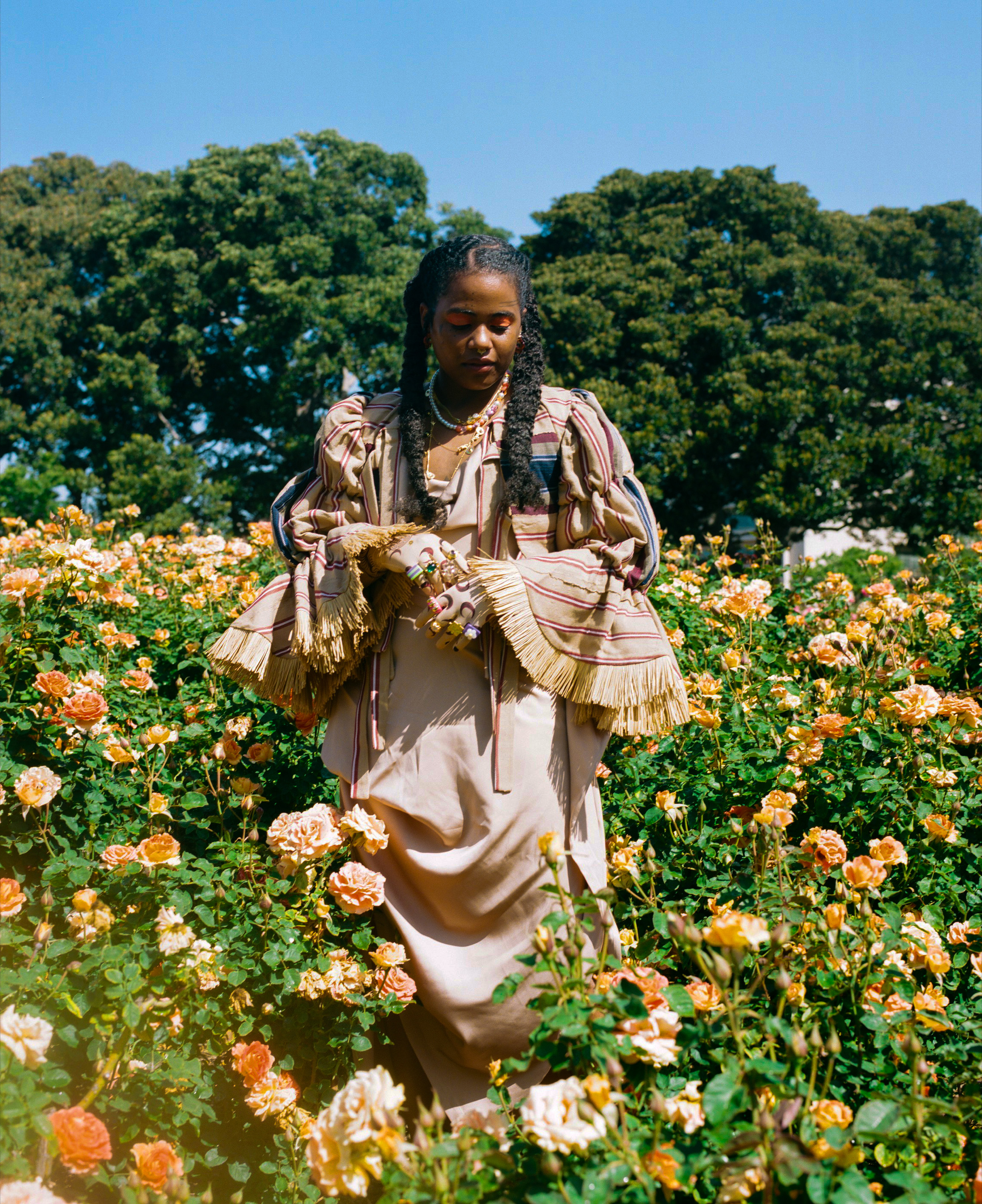 Originally from Aba in South Eastern Nigeria, Akwaeke Emezi is an artist and author of Igbo-Tamil heritage. Their critically acclaimed debut Freshwater follows the journey into selfhood of a girl “with one foot on the other side”. Emezi’s most recent releases include their romance novel You Made a Fool of Death with Your Beauty, young adult novel Bitter, and poetry collection Content Warning: Everything.

For COLORS, Emezi spoke to London-based Nigerian writer Arenike Adebajo about Indigenous  realities, the privilege of mobility, and the challenges facing queer Nigerians living in and out of the country.

Arenike Adebajo: When did you fall in love with literature?

Akwaeke Emezi: I fell in love pretty early. I started reading when I was about four or five. Around the same time, I started to write and illustrate little children’s books. My parents were really avid readers, their marriage was also a merging of both their extensive personal libraries. My father had a lot of books by Russian writers—he went to medical school in the Soviet Union—and a lot of condensed Readers’ Digest novels. They just kept getting my siblings and I books. At school, we studied African writers like Buchi Emecheta, Chinua Achebe, and Cyprian Ekwensi. I’ve never known a life without stories.

AA: I’m interested in how class has shaped your writing career. In Dear Senthuran: A Black Spirit Memoir (2021), you write tellingly about your encounters with ‘Lagos people’. What was that like?

AE: When I first started [visiting Lagos] I was introduced to a completely different social circle. These Lagosians—people whose families have lived in the city for generations and own property—have a different experience to other Nigerians. They don’t have the same experience of conflict as the rest of the country. Lagos was fine during the Nigerian Civil War (1967-1970), most people didn’t even know what was happening, meanwhile my grandfather died when Umuahia was shelled. The war really affected the economic situation of Igbo people and people in the southeast.

So, Lagos was a whole new world. I met people who took horse-riding and Swahili lessons. Back then I was like, “me, I don’t understand this”. I grew up in Aba in South Eastern Nigeria where there were riots and lynchings on a regular basis. We drove past dead bodies on our way to school or church. 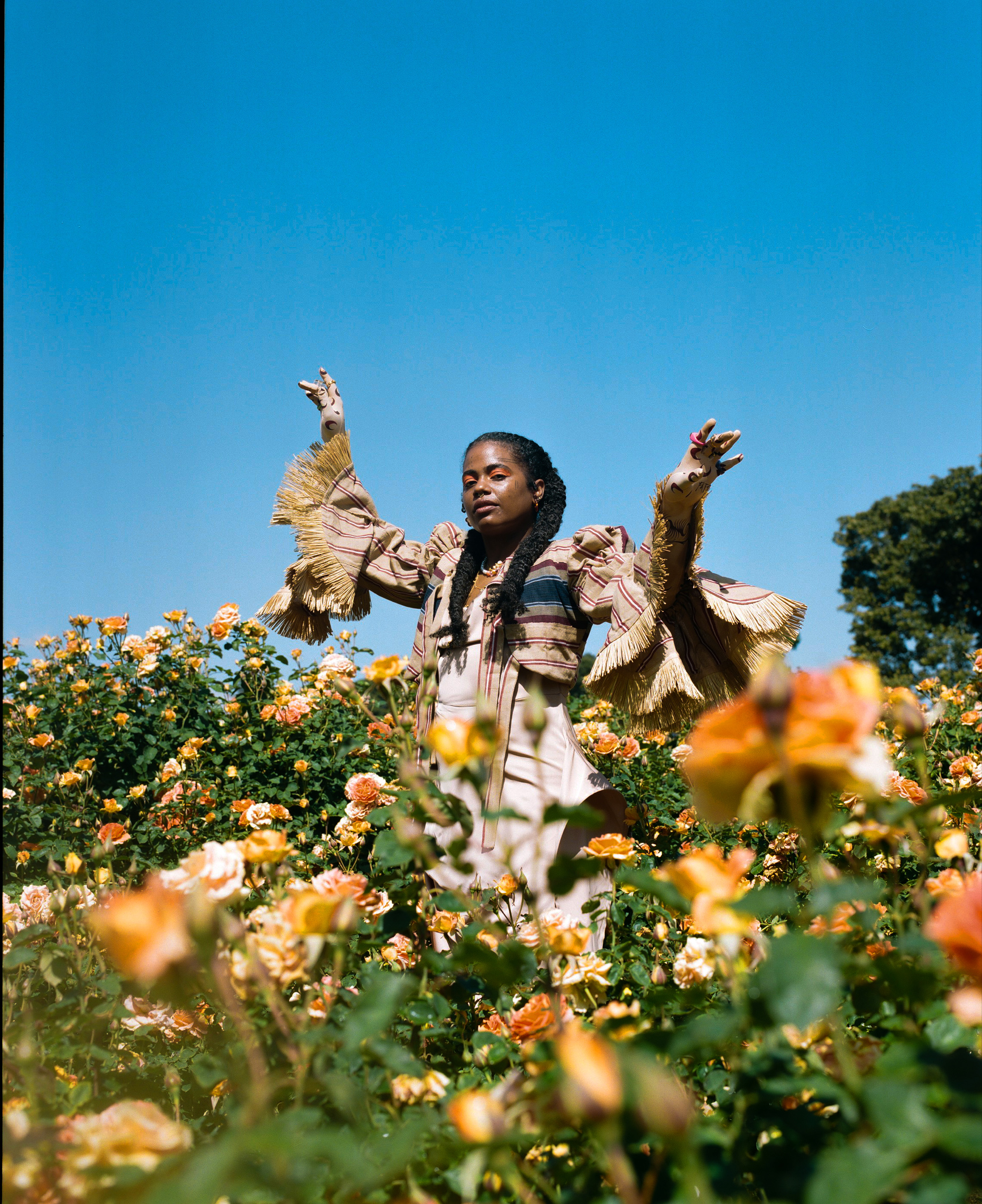 “Things that were real for millennia became unreal because white people showed up and violently said that they were make-believe.”

AA: Both you and the protagonist of your debut novel, Freshwater (2018) identify as ọgbanje, a trickster Igbo spirit born into a human body. How does your work engage with African traditional religion?

AE: Freshwater feels like a blueprint for all the work I’ve gone on to create. Writing it was when I really started to think deeply about the idea of Indigenous realities. It’s a concept I came across while reading Malidoma Patrice Somé’s book Of Water and Spirit (1994) in which he talks in depth about colonialism. When we think of colonialism, we think that people came and replaced our language, culture, and religion. What Somé points out is that they actually replaced our reality. Things that were real for millennia became unreal because white people showed up and violently said that they were make-believe.

I’m good friends with Ann Daramola, a writer and scholar who’s currently working on a theory that there’s no such thing as African traditional religions. What we call traditional religions are actually Indigenous ways of being. I agree with her on that. People didn’t practice a religion that was separate from their lives. Everything was connected, their religion was their existence. Colonialism broke that. 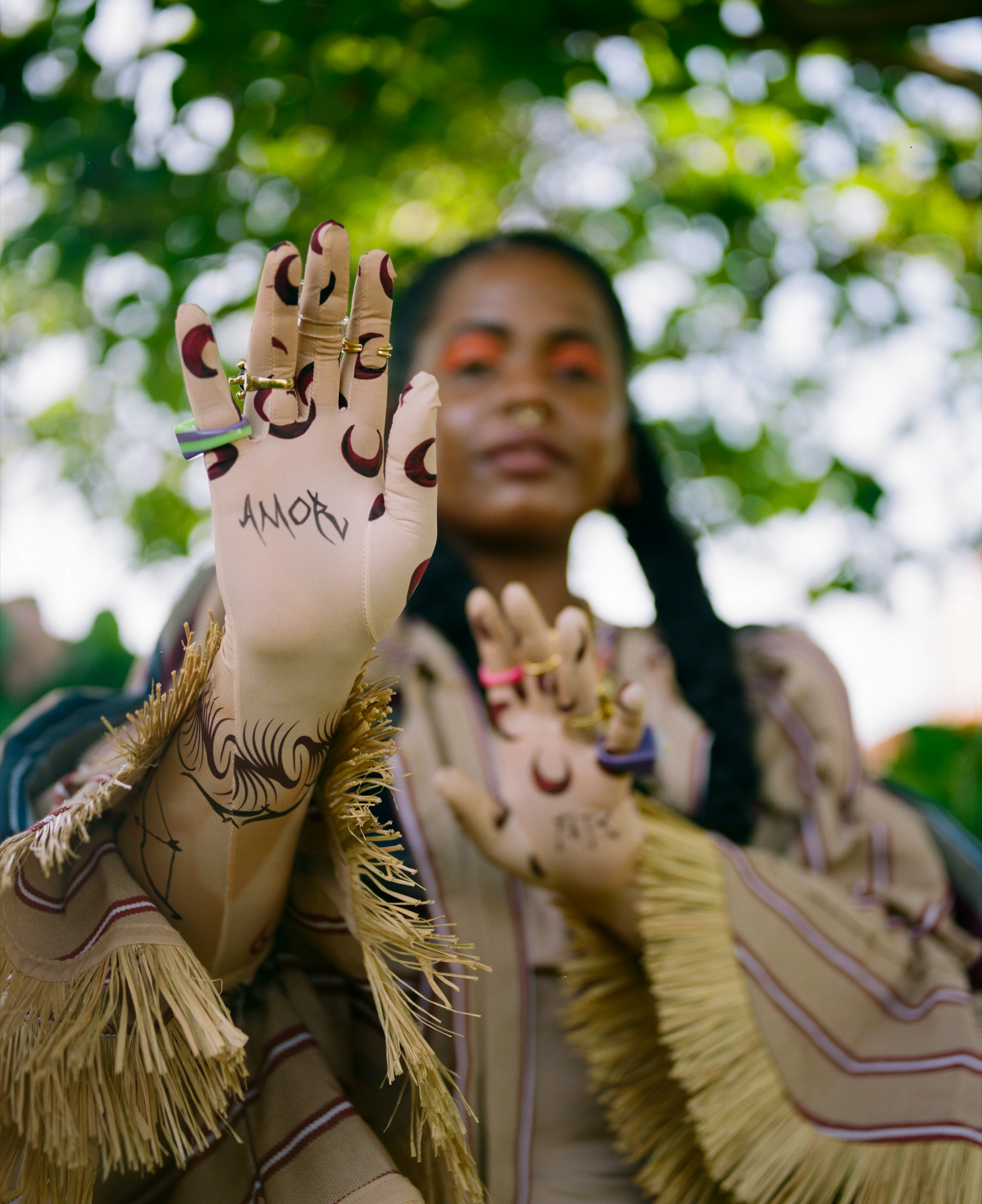 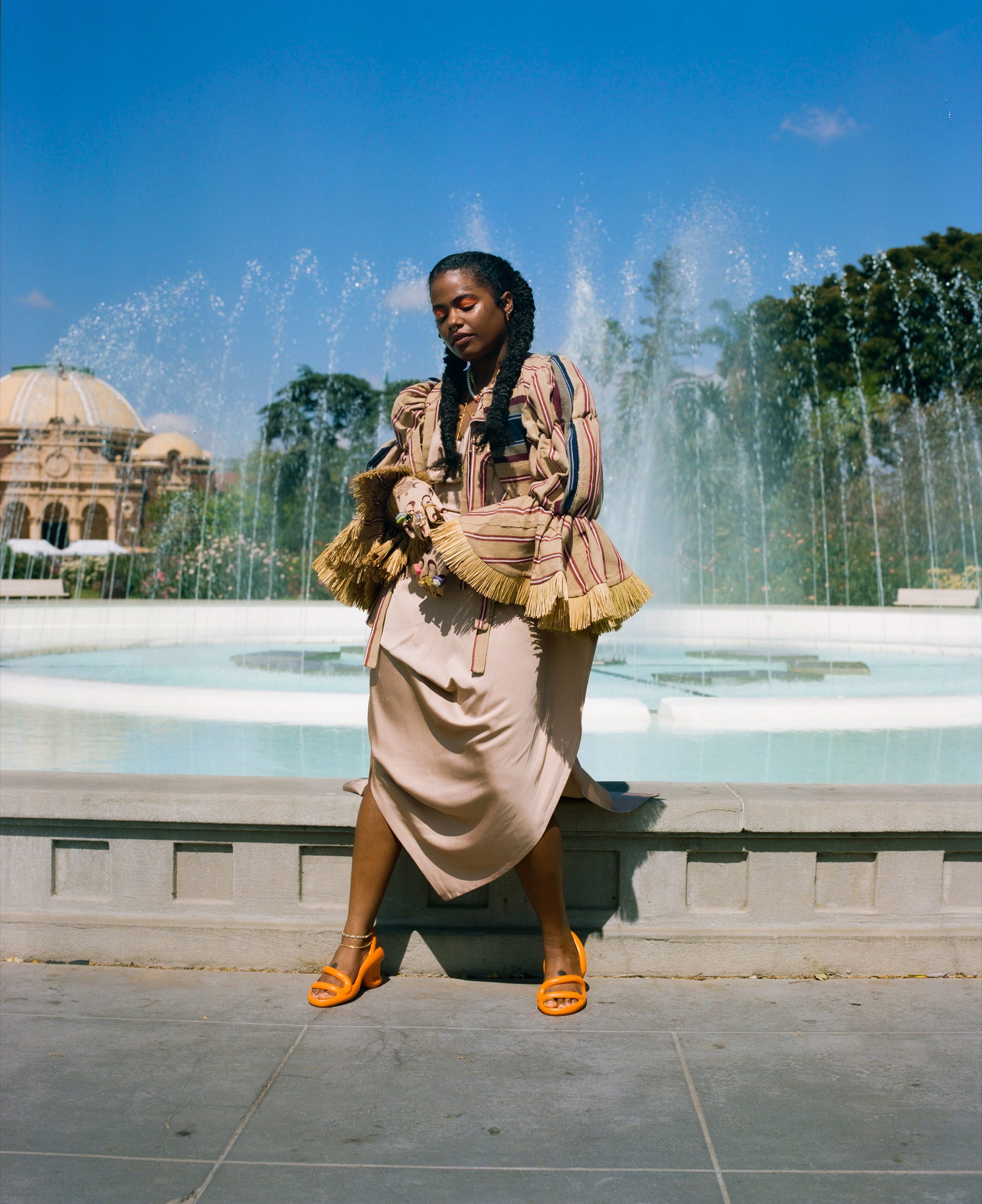 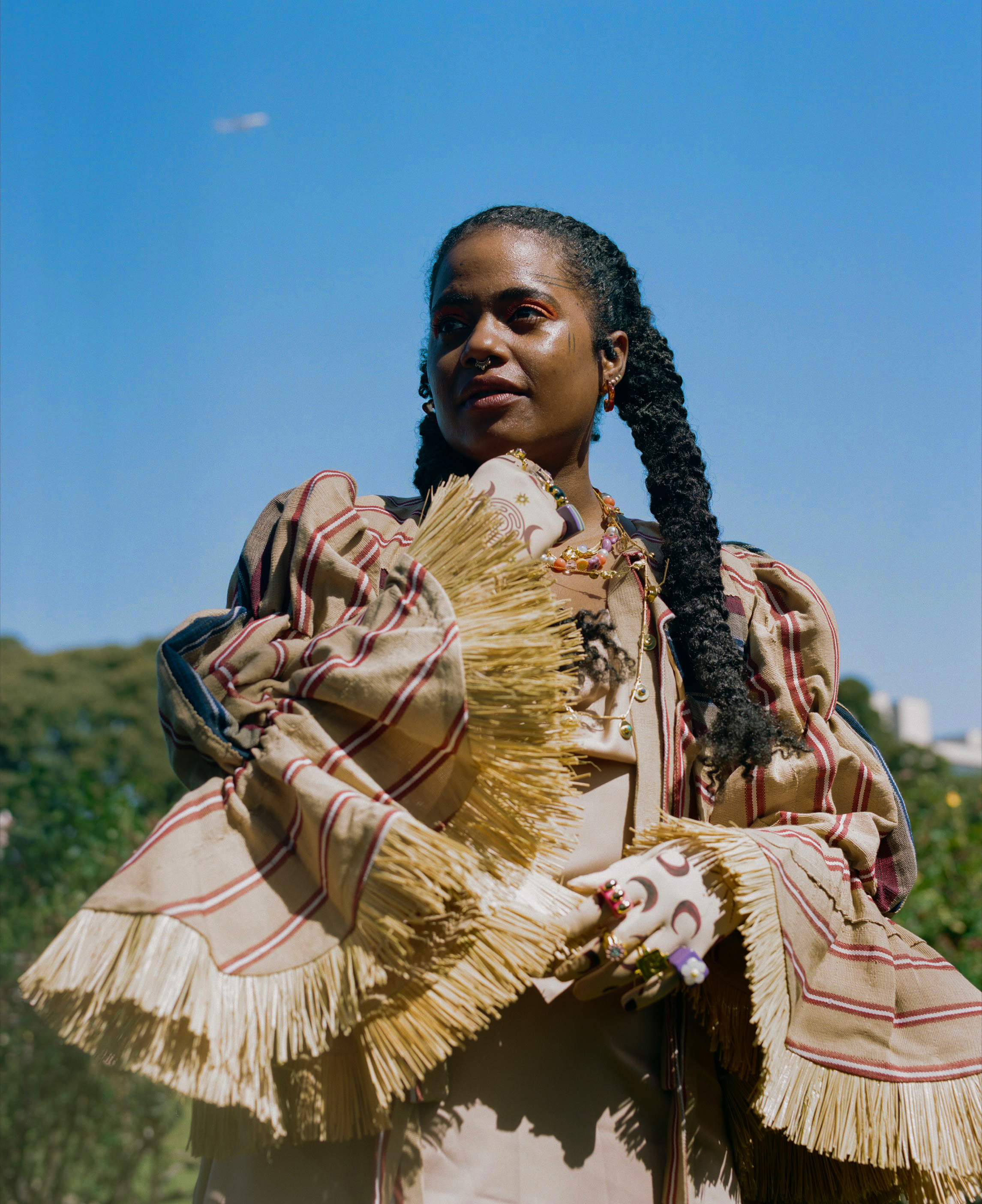 “Igbo reality is my spiritual place of origin. That would be the case whether the borders of Nigeria were drawn or not.”

AA: For me, an exciting aspect of your work is its insistence on the contemporaneity of Indigenous spiritual practices.

AE: When I started writing about being an ọgbanje, the strongest pushback I got was from Igbo-Nigerian people. They told me I was faking it. All their criteria around ọgbanje were based on a colonial taxonomy: “you only exist if I can say you exist, if I can name and identify you.” For them, the only authentic form of our Indigenous reality is whatever was there when white people found it. There’s no room for it to expand further than that. I think that’s ridiculous.

Back in the day there were specific ways of dealing with ọgbanje which mostly focused on getting them to assimilate into the human reality. But now our reality is evolving. What does it mean to be an ọgbanje in the Nigerian diaspora? What does it mean to be separate from the village community? I don’t have to conceal what I am. You can’t force me to assimilate. That is my work. I want to record and talk about these processes.

AA: This has got me thinking about the idea of the nation as a colonial construct. What’s your relationship to Nigeria, especially as someone who makes their home in liminal spaces?

AE: I’m not one of those writers who says “I’m not an African writer, I’m not a Nigerian writer, I’m just a writer.” I am all of those things. My focus is on Igbo ontology which predates the nation. Igbo reality is my spiritual place of origin. That would be the case whether the borders of Nigeria were drawn or not. 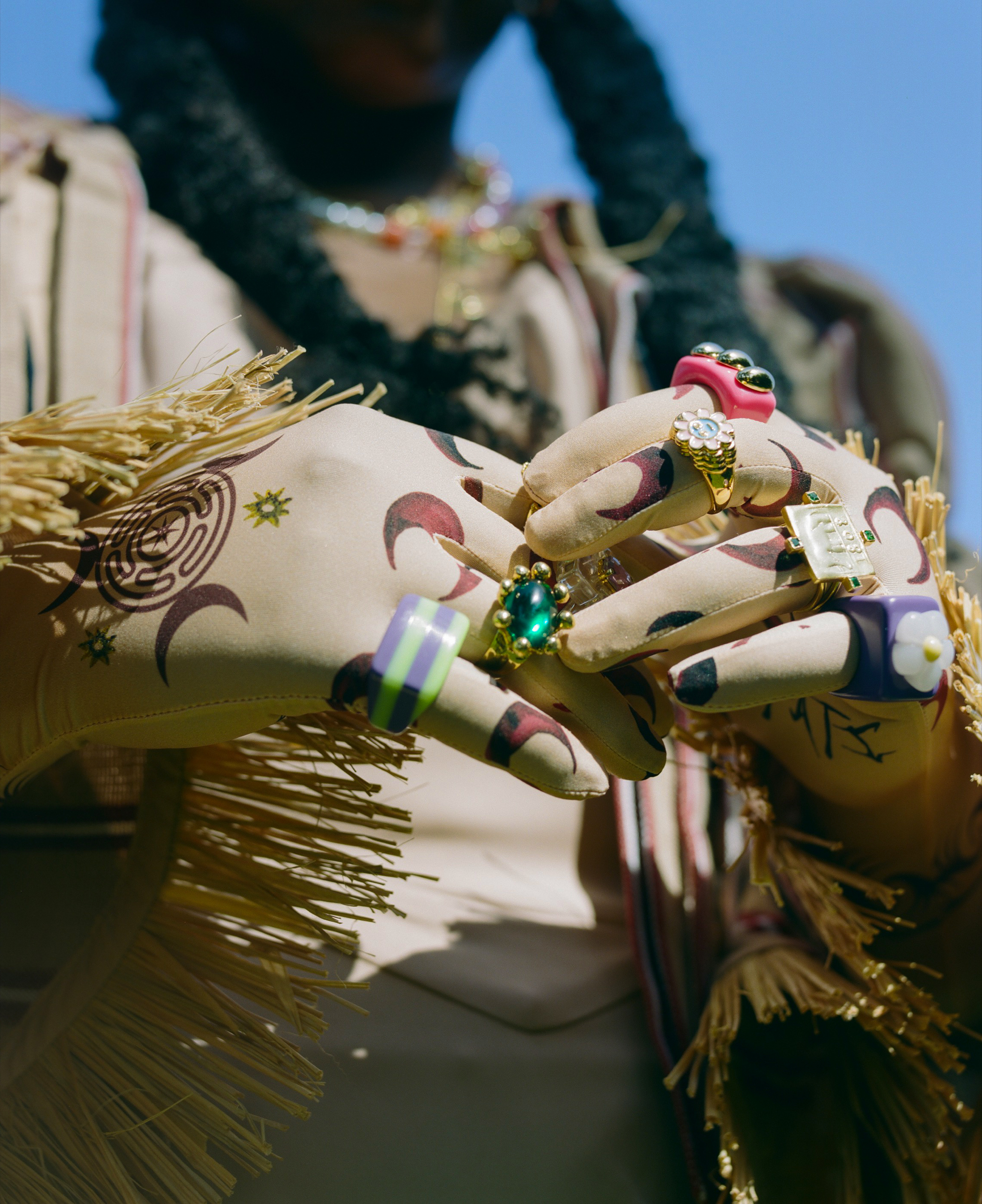 AE: As I became more public about not having a gender and being queer – again, flesh terms – it really changed my relationship with being able to go back home. I can’t live in Nigeria anymore because it’s not safe: physically or psychologically, especially given my visibility. I see myself as being in exile, which I’ve come to terms with. I know now that I can make my home in different places, but of course I’ll always feel a sense of grief and loss.

Queer Nigerians are often exiled from our culture. We don’t have access to so many things that straight Nigerians take for granted. One of the most common heartbreaks is realizing that you can never have a traditional wedding. Your family will never come together for you the way they would if you were straight. You won’t get to have the big owambe with a queer partner. It’s really crushing when you realize all the things you’ll miss out on just because you’re queer.

AA: And then there’s reckoning with the privilege of mobility. I think a lot about queer folks back home and the social, psychological, physical, and legislative violence they face.

AE: For me, the privilege of mobility has been something that’s difficult to come to terms with. The only reason I was able to leave Nigeria was because my mother was adamant that her children would not stay in the country. She worked very hard to plan our exit. 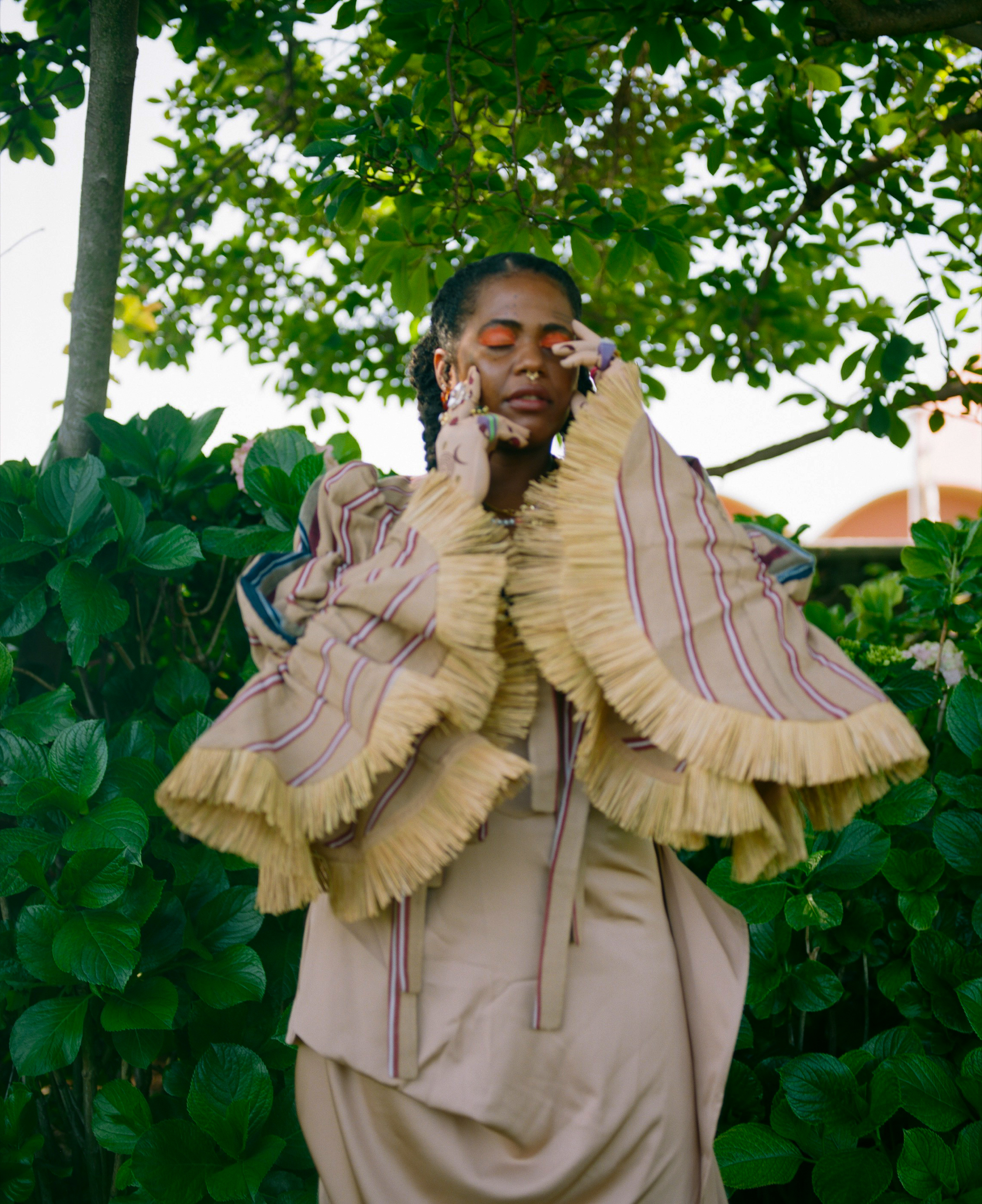 “A story is not going to pay your rent when your landlord kicks you out for being trans in Nigeria.”

AE: My class position has changed since my book career took off. It’s inefficient to wallow and think “oh no, poor me, I feel so bad about my class status”, like white people who spend their time feeling guilty about their privilege without actually doing anything. The way I deal with it is by redistributing resources to black trans people in Nigeria. There are organizers on the ground doing the work to materially improve the conditions of people’s lives. I try to figure out how I can support and amplify the people doing that work.

AA: Your young adult novels Pet (2019) and Bitter (2022) engage with these strands of conversation, but in a US context. What can your writing show us about imagining radically different futures for Nigeria?

AE: Those books were an exercise in trying to believe in something better. I feel so much despair about the world. Stories are great, they give you possibilities. But I’m more concerned with making a material difference in people’s lives. A story is not going to pay your rent when your landlord kicks you out for being trans in Nigeria.

I think my stories are limited in what they can do. I’ve been out of Nigeria for a few years now, so they function a little differently. There are so many queer Nigerian writers who are writing about being queer in Nigeria while living there. They’re writing stories of possibility that I think are more useful to people back home. Eloghosa Osunde’s new book, Vagabonds (2022) is a great example. Ani Kayode Somtochukwu also has a book coming out next year: And Then He Sang a Lullaby from Roxane Gay Books. 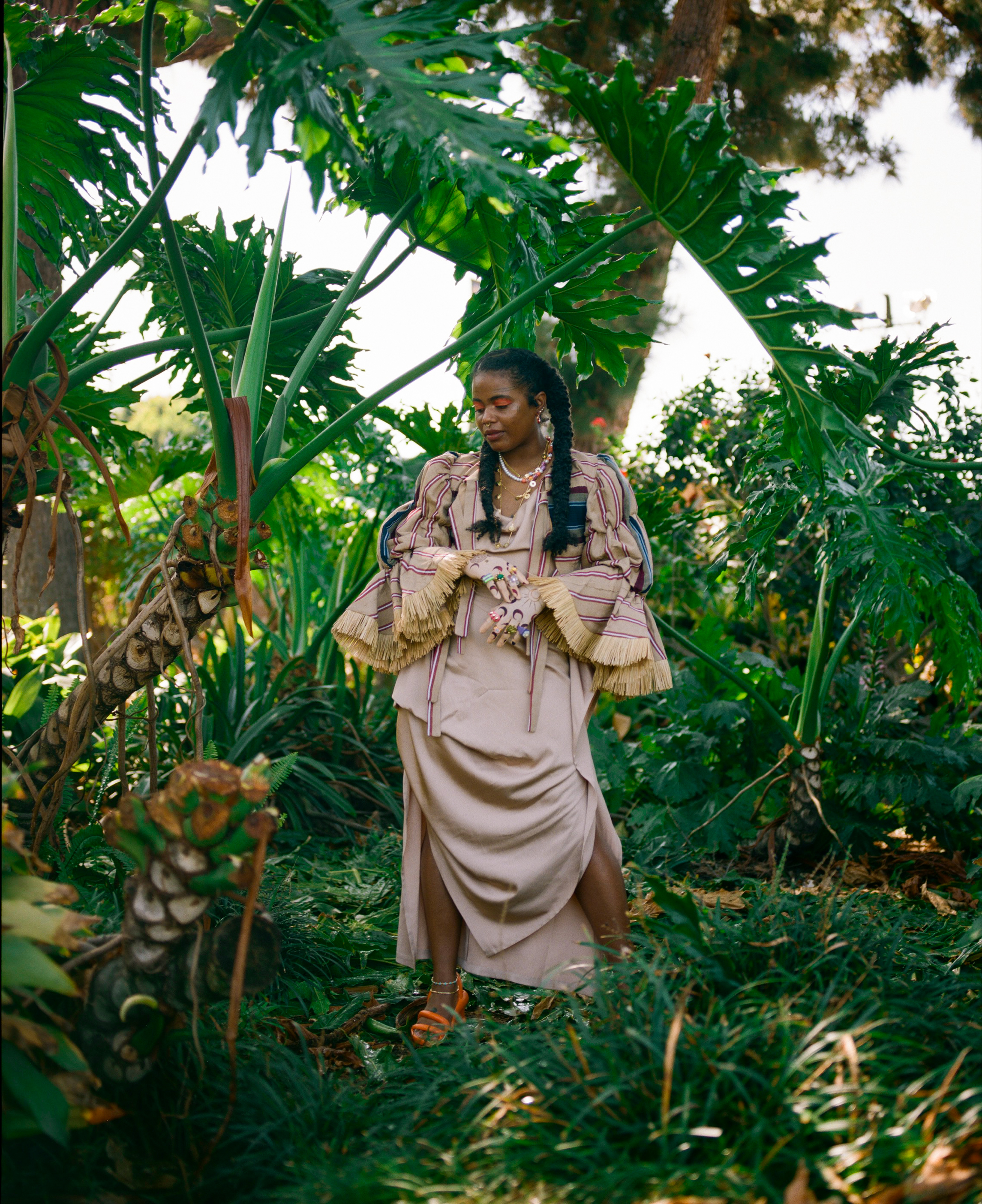 AE: I was materially helped by other queer writers. The turning point in my career was when Binyavanga Wainaina read my manuscript and took me under his wing. It’s not lost on me that there are a lot of cis-het African writers who have the institutional power to do things like that, but choose not to. For me, they’re shockingly neglecting their responsibility. Especially for queer writers in Africa, [this industry] is not a meritocracy. It’s about who you know and what gates you open for people. Once Binyavanga helped me on my way, I took it upon myself to pay it forward.

In Dear Senthuran, I talk a lot about being a god. When they read this, many people immediately think of it as a hierarchical structure. For them, it’s as if I’m saying I’m better than everyone else. In Igbo villages, this isn’t the case. Deities work for the people. There’s even a proverb that tells people to show deities the wood that they are carved from if they act up. That’s a threat! Deities are in service to the community, and if they no longer function in that way, people destroy their shrines. This is how I see my position in the world. I have a degree of power, but I also am in service to a particular community. The purpose of my power is to be of service. 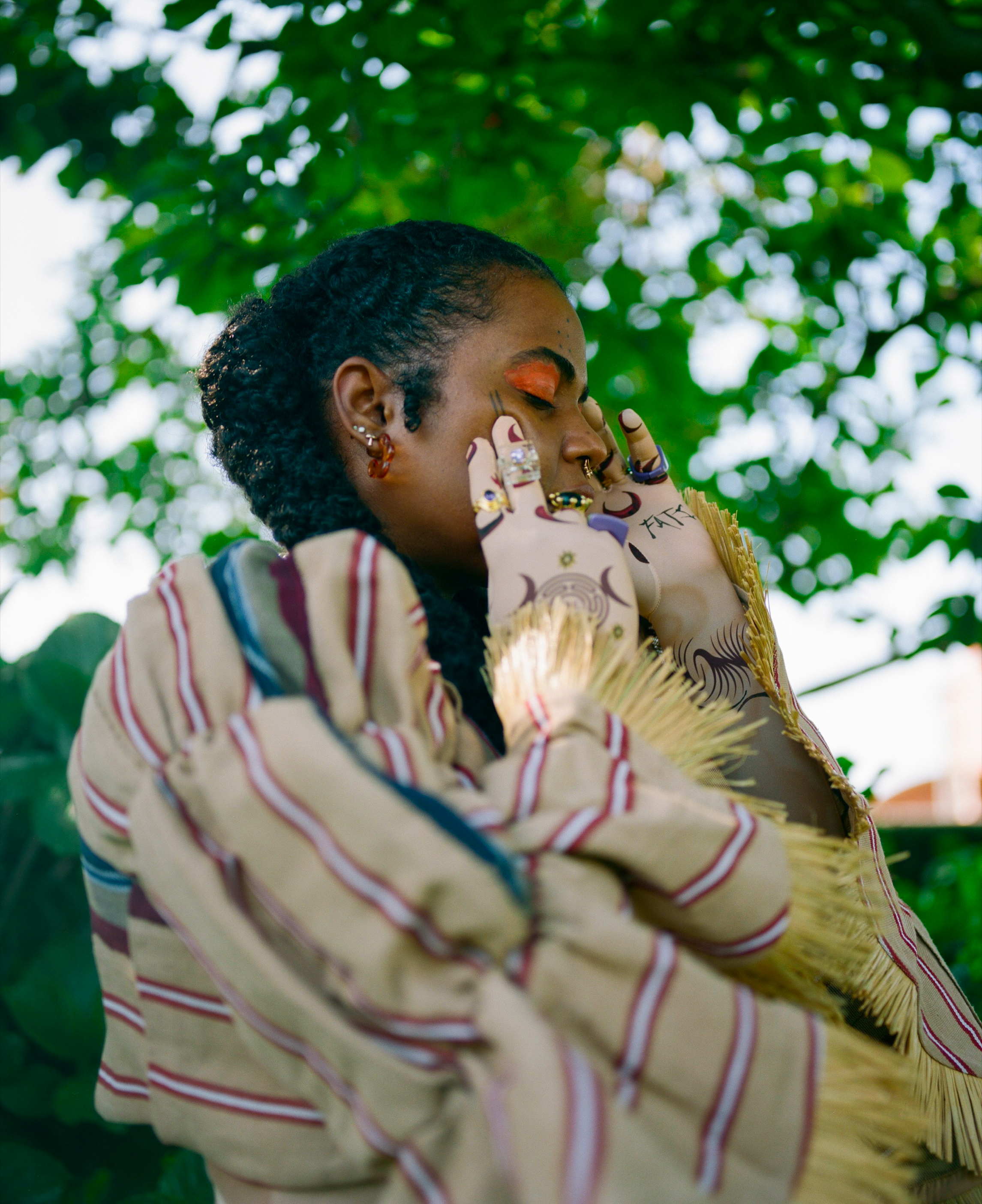 Originally from Aba in South Eastern Nigeria, Akwaeke Emezi is an artist and author of Igbo-Tamil heritage. They are the critically acclaimed author of Freshwater, Pet, The Death of Vivek Ojih, and Dear Senthuran: A Black Spirit Memoir. Emezi’s recent releases include their romance novel You Made a Fool of Death with Your Beauty, their young adult novel Bitter, and their poetry collection Content Warning: Everything. To find out more about their work, follow them on Instagram or check out their website.

This article was written as part of COLORS’ editorial coverage in line with a recent production period in Lagos, Nigeria in Spring 2022. Head over to our YouTube channel to watch the shows we produced with Nigerian artists, or to our editorial platform to read more articles about the Lagos ballroom scene, West Africa’s first contemporary art fair, or the Nollywood nostalgia sweeping Nigeria.

What our community says

As a spirit being still navigating the understanding of self, I thank Akwaeke for their service. Please tell them for me.