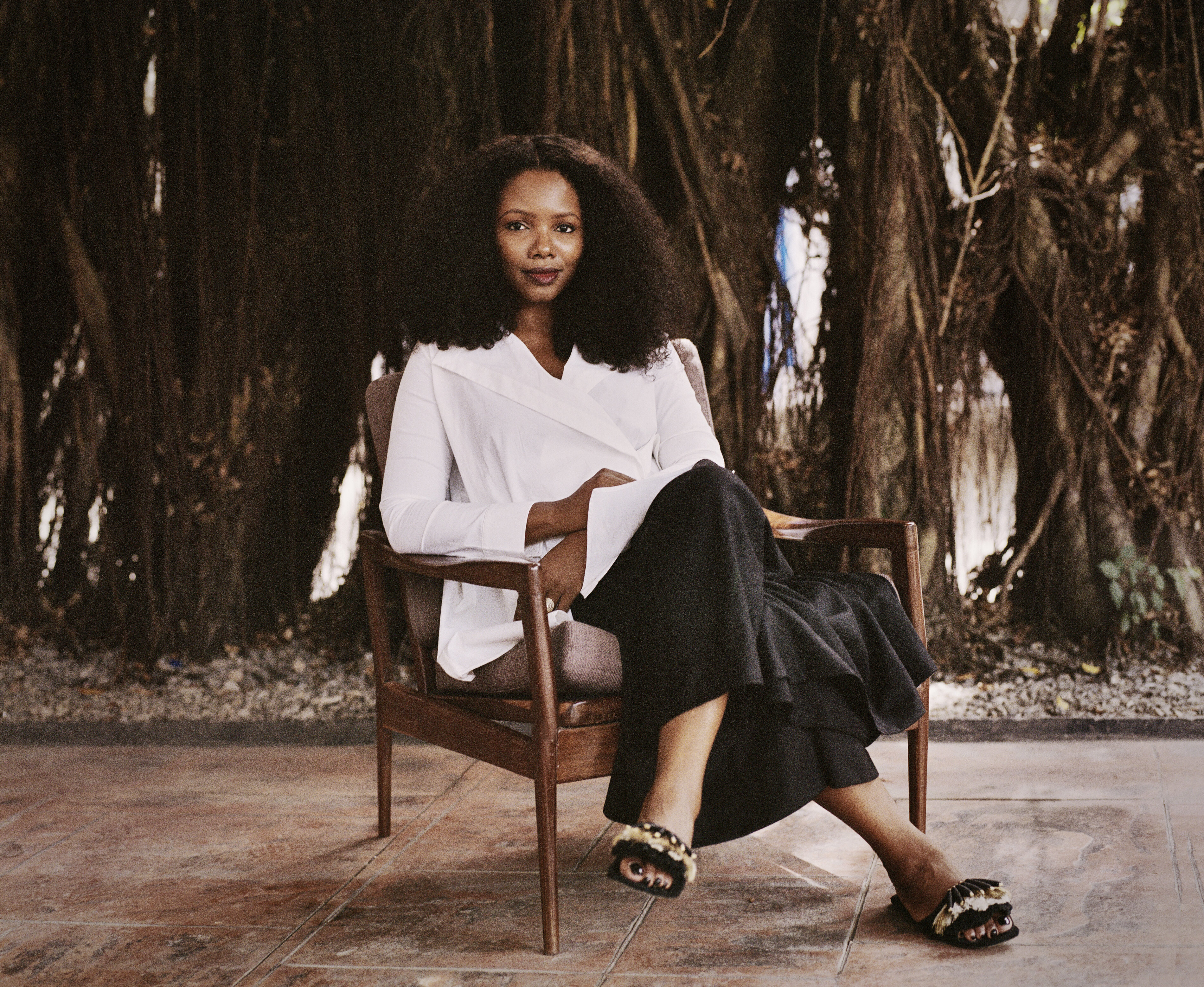 British-Nigerian art writer Olamiju Fajemisin speaks to the founder of the first international art fair in West Africa about art ecosystems, the importance of locality, and what needs to happen to restore Lagos as a leading global center of culture.

In 1472, Eko, a small Yoruba fishing settlement on an archipelago clinging to the lip of West Africa, was landed by Portuguese traders. They renamed it Lagos, meaning “lakes”, on account of the many lagoons surrounding the area. From this minor colony emerged a cornerstone of empires – a crucial trade hub and subsequent global slave trading hotspot and later capital of Colonial Nigeria.. By the time of independence in 1960, Lagos’ population stood at 762,418. Now, the swollen cosmopolitan metropolis is estimated to hold fifteen to twenty-three million – the most populous city on the continent.

Though it may no longer be the capital of Nigeria, Lagos is historically understood as the de facto international contact zone in West Africa, a cultural capital in its own right, and later, the location of the country’s desire to re-establish its national identity as a new republic. This said, years of coups, political crises, and corruption scandals have overshadowed the city’s abundant creative legacy.

Tokini Peterside-Schwebig, founder of Art X Lagos, the first international art fair in Africa, is working tirelessly to restore Lagos as a leading global artistic center. A Lagosian by birth, Peterside-Schwebig’s primary concern is with locality: her adaptable model feeds Lagos, just as Lagos feeds it in return. 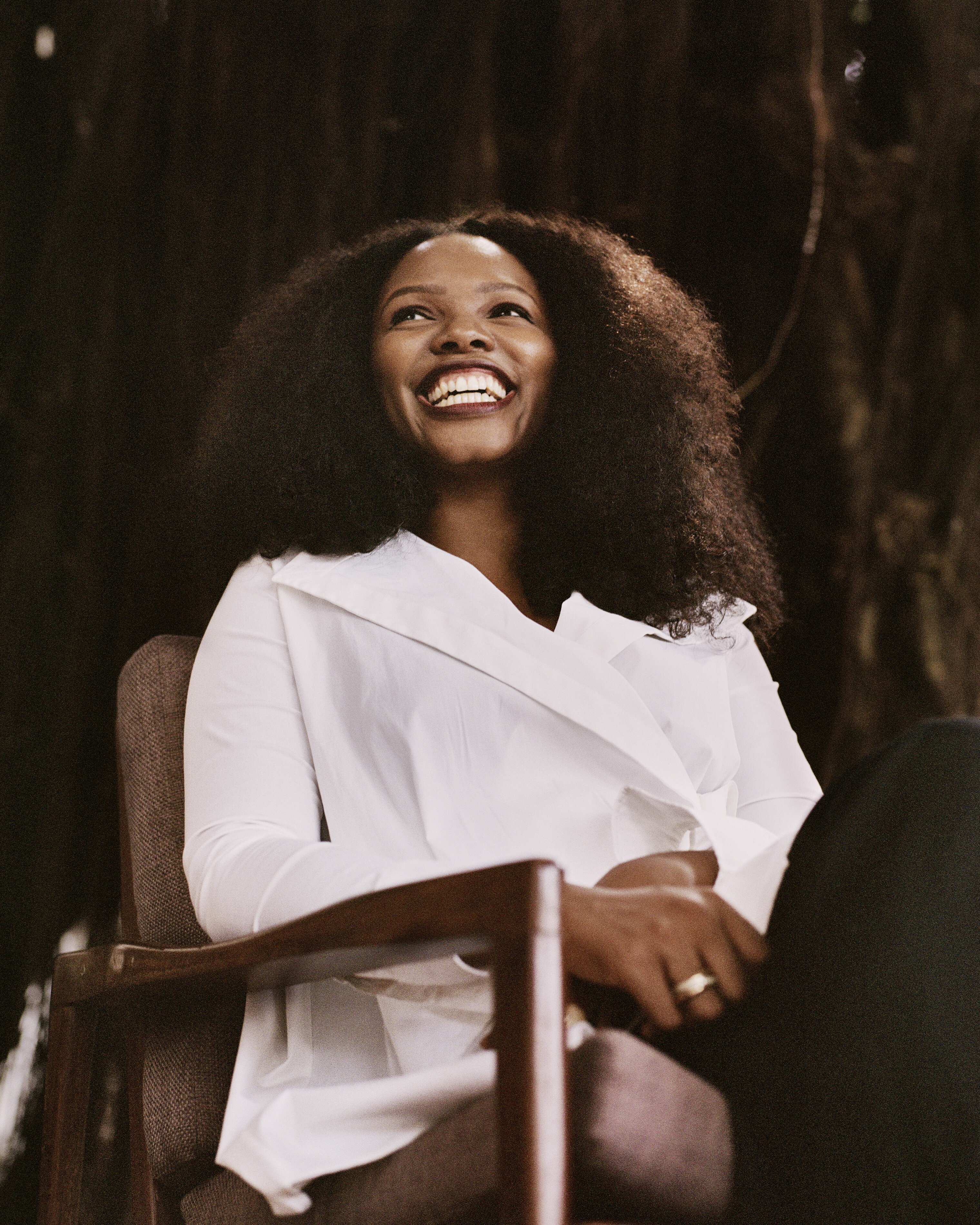 “I became this unofficial ambassador for Nigerian contemporary culture. If you so much as expressed interest, I’d expose you to our art, music, fashion, film – the works.”

Raised in a “culturally rich home” in Lagos, Peterside-Schwebig moved to the U.K. aged twelve to attend boarding school, then university, where she became “obsessed” with the arts. “I went to the London School of Economics to study law, but I was working with a huge variety of friends who wanted careers as fashion designers, filmmakers, photographers, writers, and artists,” she explains. “I was always the friend that you came to when you were creatively inclined, and you wanted to make something out of it.” In her first, unofficial role as a cultural consultant, Peterside-Schwebig referred her peers in London to Nigerian musicians, artists, designers, and so on. “I became this unofficial ambassador for Nigerian contemporary culture. If you so much as expressed interest, I’d expose you to our art, music, fashion, film – the works.”

In 2007, Peterside-Schwebig left the legal route, moving back to Nigeria the following year. Soon after, she bought her first artworks at the inaugural auction of Arthouse Contemporary founded by collector Kavita Chellaram. She describes the moment as “a major catalyst event in the art world,” at last, a chance for the aesthetes and artists of Lagos to unite in mutually beneficial congress. 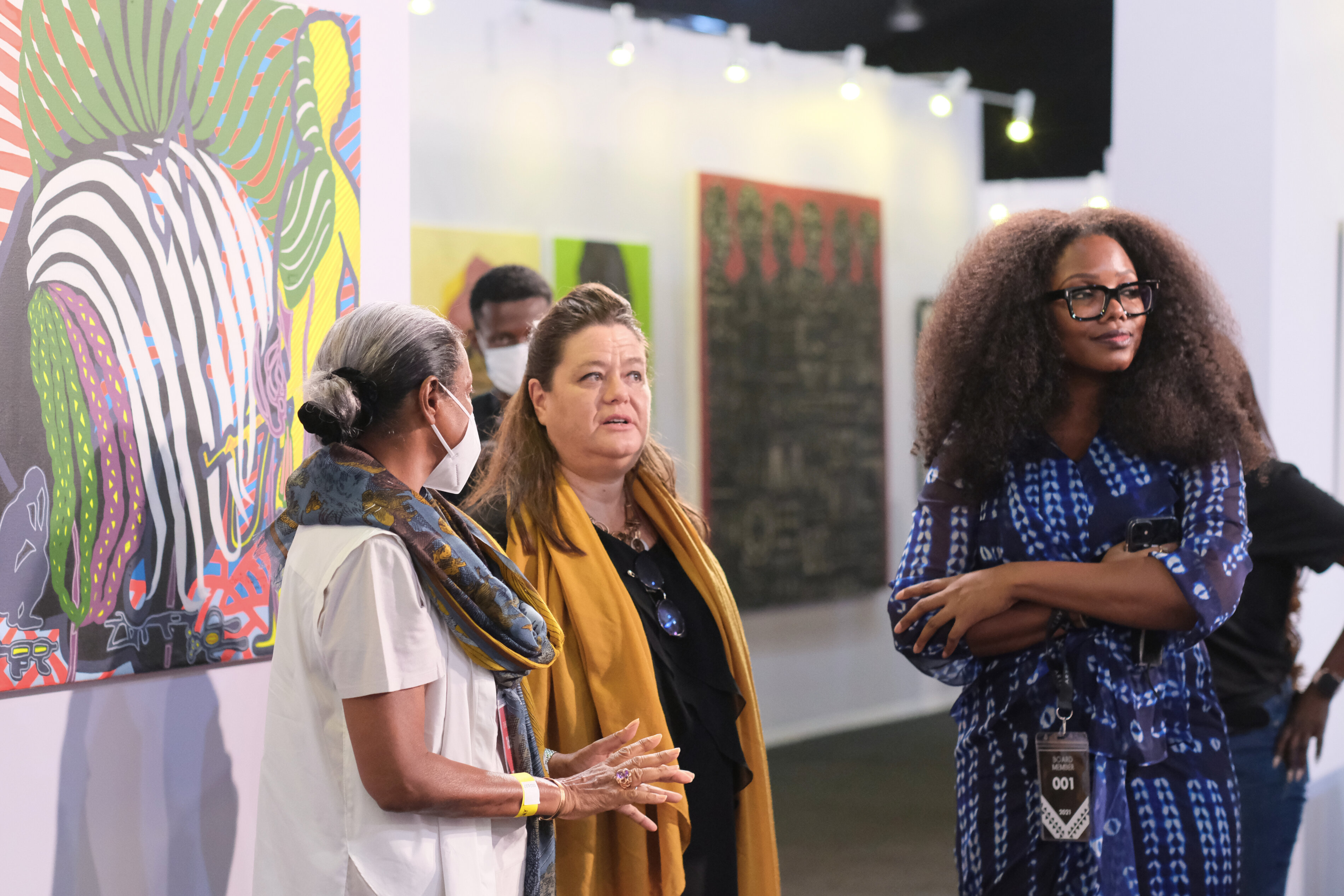 The years passed, and Peterside-Schwebig’s collection grew, as did her support for artists in Lagos. As a communication and events head for LVMH, she backed Nigerian artists through global platforms, supporting Wizkid’s first concert in Lagos, for example. Nonetheless, the center struggled to hold. “So many of them hoped to get an international residency,” says Peterside-Schwebig, “international” meaning Berlin or New York City. “Artists told me just how difficult it was to have a strong career—not just locally, but regionally and internationally too—if they maintained a base in Lagos. You’ve been to Lagos. I’m sure you’re well aware of how much more challenging it is to create a platform locally.”

In 2015, driven to restore the city’s sense of local cultural value, Peterside-Schwebig pursued an MBA at INSEAD in Fontainebleau, France and Singapore. She then traveled to Venice to visit “All the World’s Futures”, the 56th Venice Biennale curated by the late, great Okwui Enwezor. Equipped with a new qualification and inspired by Enwezor’s presentation of African artists as previously unfathomed, Peterside-Schwebig arrived at the office of the late Centre for Contemporary Art Lagos founder Bisi Silva and pitched her idea for a new kind of art fair for Nigeria. Silva joined the first edition as artistic director, and after a ten-month sprint, ART X Lagos opened to the public. 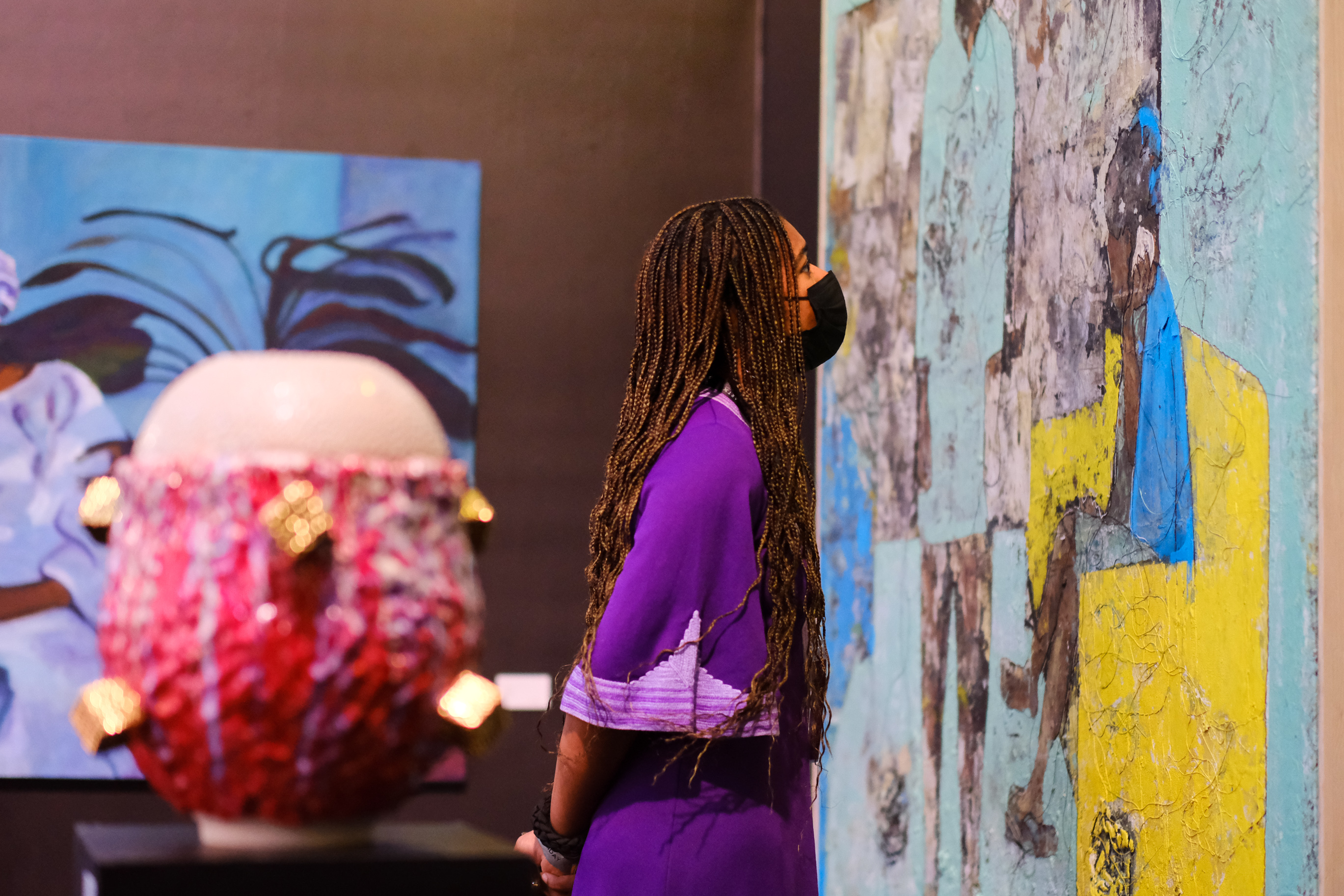 “While we wanted to be adopted and accepted by international collectors, the fair was not being designed solely with their experience in mind.”

Since November 2016, six successful editions of the fair have welcomed thousands of visitors and dozens of galleries showcasing work by hundreds of artists including international stars Amoako Boafo and Joy Labinjo, as well as local legends such as textile designer Nike Davies-Okundaye and photographer J. D. ‘Okhai Ojeikere. According to Peterside-Schwebig, the fair is a “catalytic” success. “It has opened people’s eyes to the fact that there is a massive amount of artists, practitioners, and commentators in Lagos,” she says. “It began a process of reconnecting Nigerians with their true identities as art and music lovers.”

Art fairs are regularly critiqued for reproducing the conditions they hope to challenge or transform within the communities they profess to support. With this in mind, some may wonder whether the same aims could have been achieved through the establishment of a new kind of permanent institution, a residency, museum, academy, or even a biennial. But Art X Lagos doesn’t simply “copy and paste” art fair models seen in Basel, New York, and London. “We were very clear about the fact that, while we wanted to be adopted and accepted by international collectors, the fair was not being designed solely with their experience in mind,” she says. Opening in a megacity with a hunger to view and make art, but a relative lack of institutions or artist funding, Art X Lagos had several boxes to tick. As a result, the fair has become a multidimensional festival of culture—featuring art, music, performance, and discourse—that revitalizes the Lagosian arts ecosystem with annual bursts of attention and sponsorship. 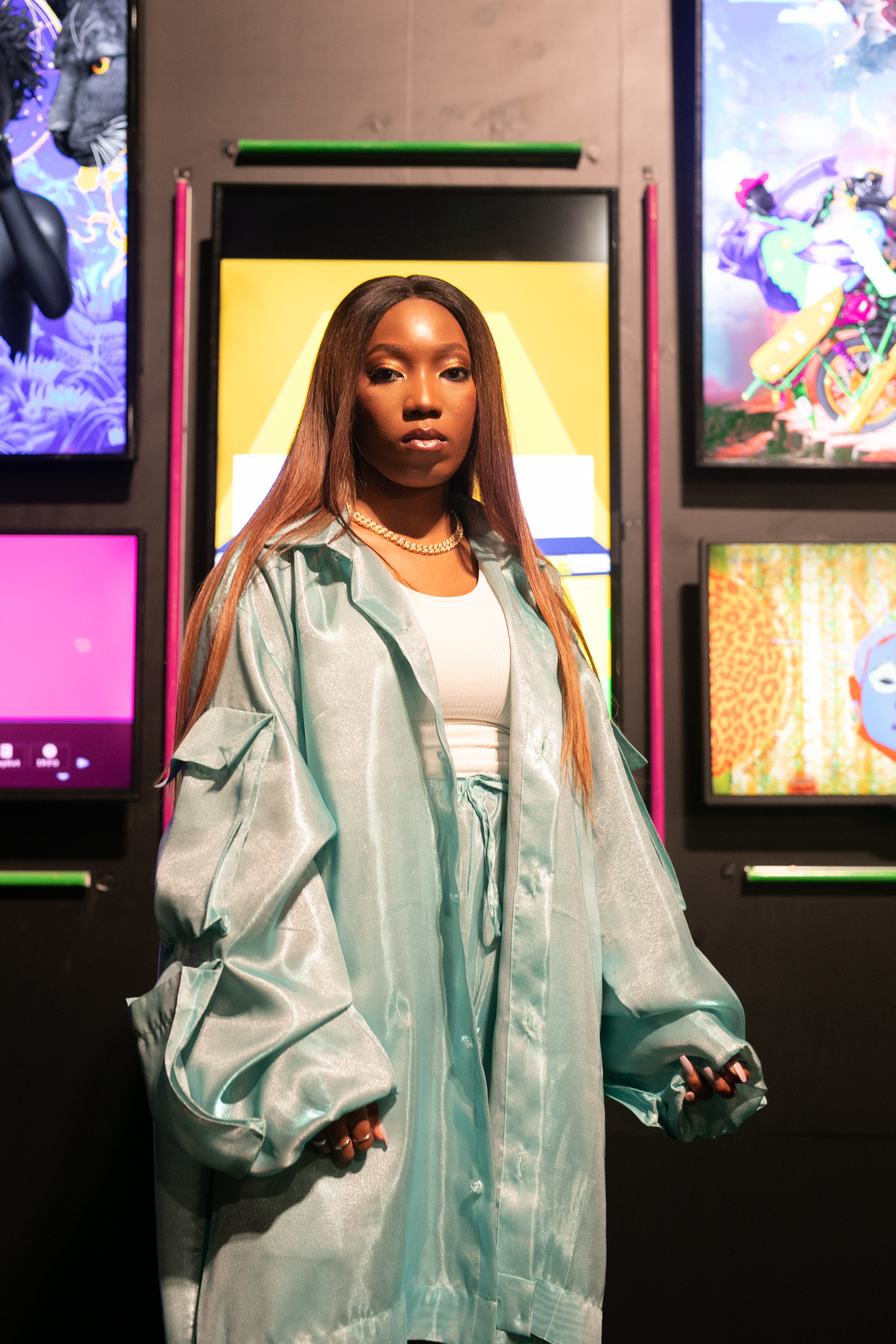 “The visual arts have been restored to their rightful place in Nigeria’s national consciousness.”

This notion of a local “ecosystem” is crucial to Peterside-Schwebig’s view on her project’s success. Held strategically during the opening week of LagosPhoto, the first international arts festival of photography in Nigeria which is now entering its 13th edition, ART X Lagos has helped increase the number of arts patrons, collectors, curators, and artists drawn to the city at the same time. “In 2021, the Smithsonian National Museum of African Art came to Lagos specifically when our fair was on to connect with the local scene… a visual arts season is blossoming,” she says. Just as “Basel” means “June” to some art world figures, “Lagos” could soon translate to “November.”

Art X Lagos is the latest in a series of initiatives drawing a direct attentional focus to artistic production in Nigeria, and by extension, the African continent. “The visual arts have been restored to their rightful place in Nigeria’s national consciousness,” Peterside-Schwebig confirms. The roots of the ecosystem are firmly planted, now it only has to flourish. 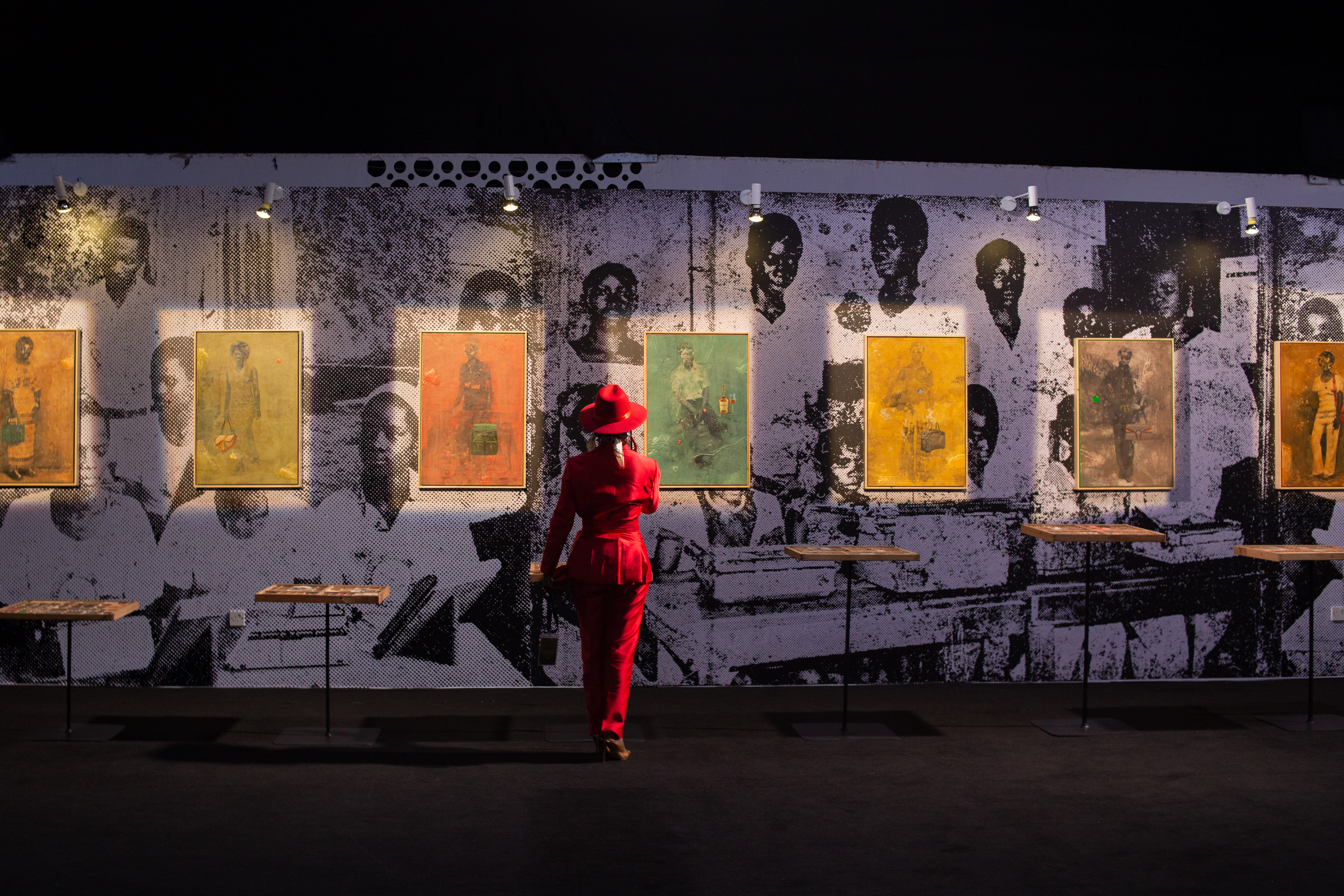 Tokini Peterside-Schwebig is the founder of ART X Lagos, the first international art fair in West Africa. To find out more about her work, follow her on Instagram, or check out ART X Lagos’ website.

This article was written as part of COLORS’ editorial coverage in line with a recent production period in Lagos, Nigeria in Spring 2022. Head over to our YouTube channel to watch the shows we produced with Nigerian artists, or to our editorial platform to read more articles about fashion designer Bubu Ogisi, the Lagos skate scene, or Nigerian highlife band The Cavemen.