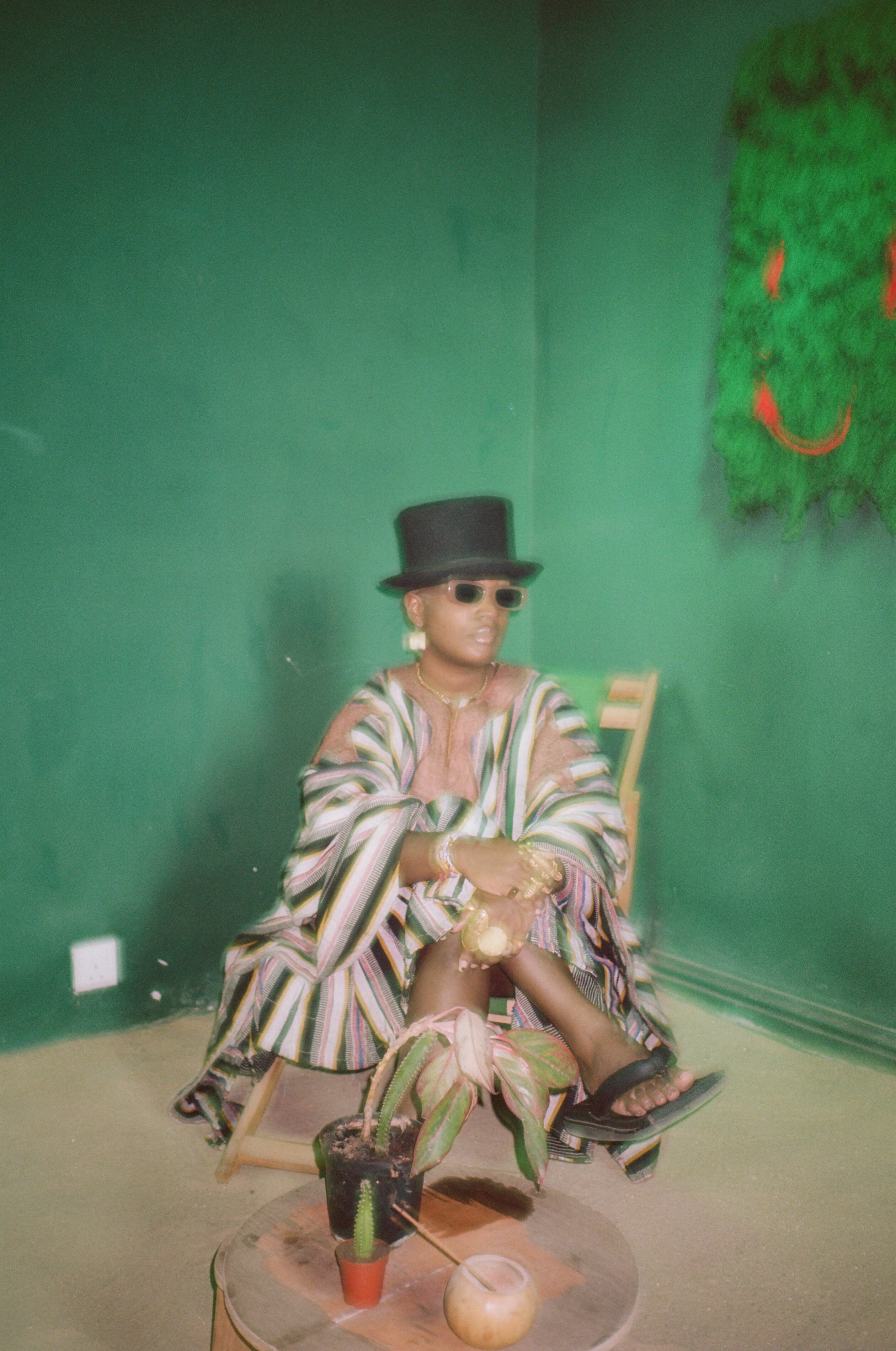 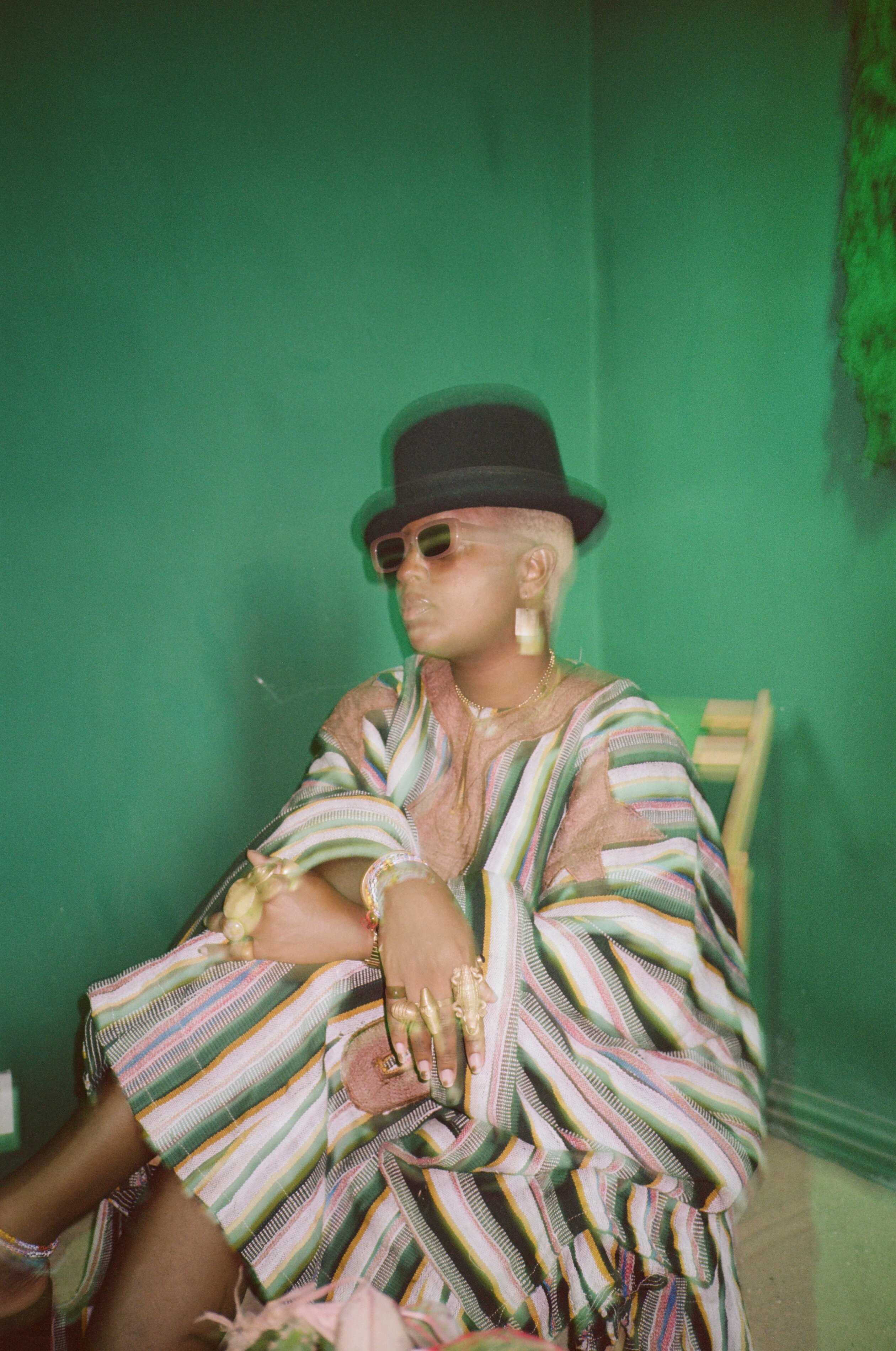 Writer Mazzi Odu speaks to Lagos-based designer and IAMSIGO founder Bubu Ogisi about preserving and modernizing traditional crafts and techniques, environmentally-friendly fabrics, and challenging people’s perceptions of how the typical African should be dressing.

Entering Bubu Ogisi’s showroom is a sensory assault of the most beguiling kind. “I always like the exchange of energies. This space is a result of me wanting somewhere people can see and experience my mind and understand me,” she says. The founder of Lagos-based womenswear brand IAMISIGO, Ogisi’s oeuvre interrogates notions of self, belonging, history and culture via the lens of clothing and accessories. With this in mind, it is unsurprising that she wanted to create a fitting repository for her ideas.

The light airy studio leads to an annex that is divided into three red, green and blue chambers. “My son, who was four at the time, and I designed it together. I was going to make it an extension of the showroom, but he was like ‘no Mummy! Red, blue, and green!’ I later realized that these three shades combine to create the color of light. I thought that was really cool.” The anecdote acts as an insight into Ogisi’s practice which has collaboration at its heart: all of her partners play pivotal and equal roles in both preserving and modernizing craft, culture, and clothing.

Ogisi, like many designers before her, saw a gap for her creative universe. “What prompted me to start my own fashion house? I was really hungry for something super exciting. I guess if you want something you have to do it yourself.” A graduate of the Ecole Superieure des Art et technique de la Mode (ESMOD) in Paris, mastering the fashion toolkit from a western orthodox perspective was one small part of her development as a designer. “I wanted to highlight the different ways you can work with textiles, and also change people’s ideas of how the typical African should be dressing,” she explains. 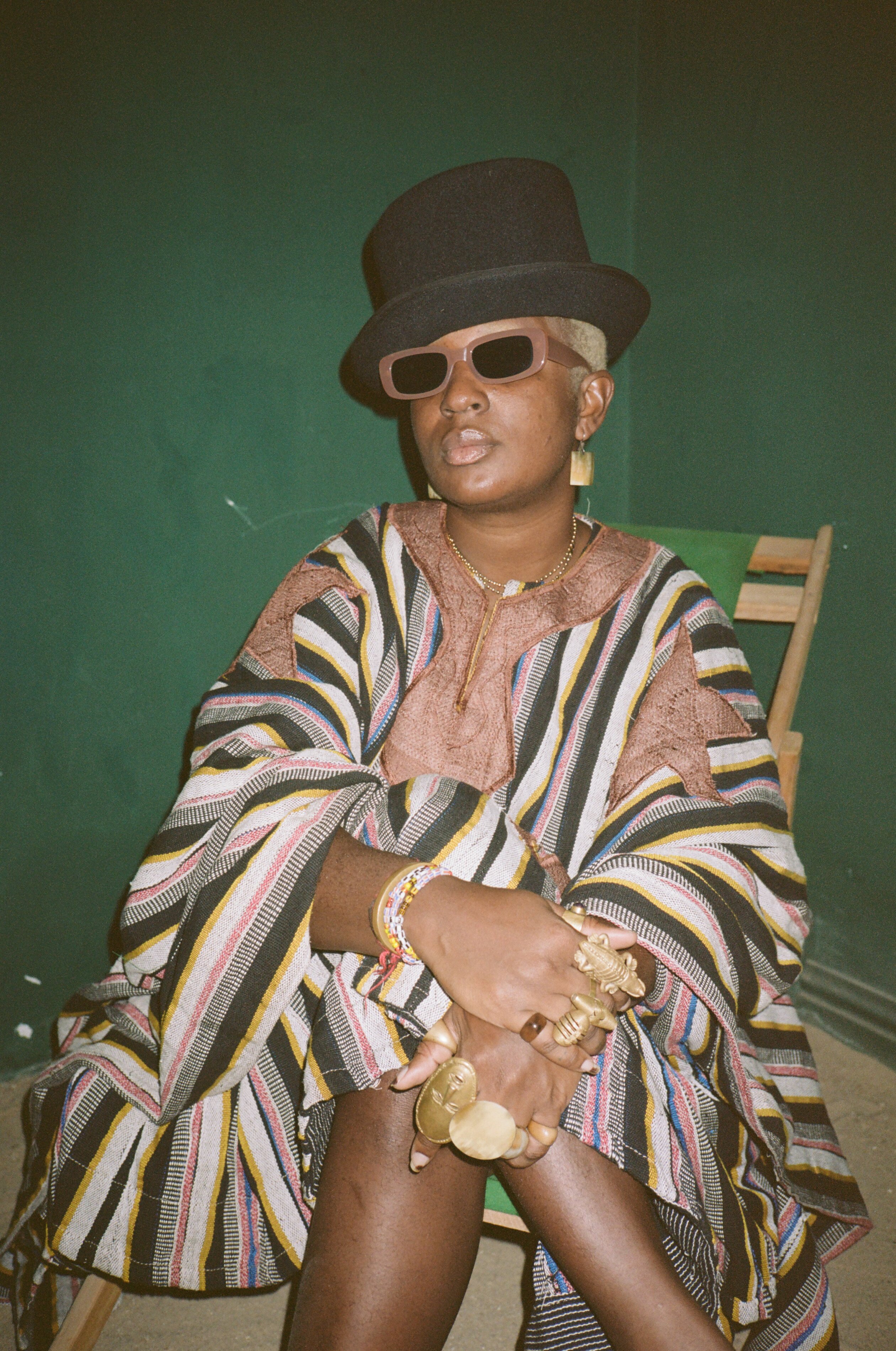 “I wanted to change people’s ideas of how the typical African should be dressing.” 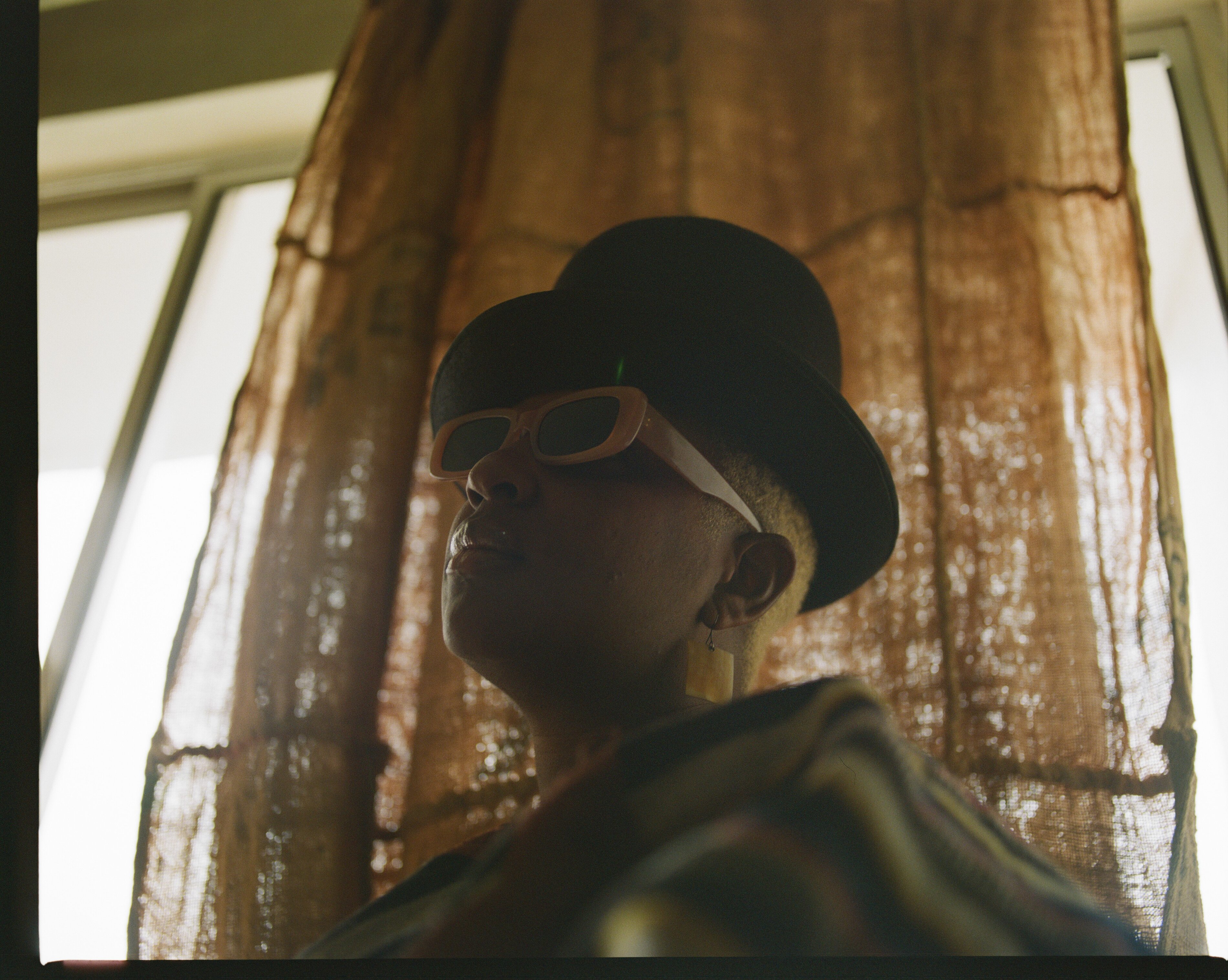 This motivation took Ogisi across the African continent as she set about the audacious task of documenting different methods of making, engaging with traditional craftsmen and refashioning what she learnt for contemporary realities. For Ogisi, there was much at stake: as well as contributing to the futureproofing of ancient craft practices, she was also searching for a more sustainable and kinder means of production in one of the world’s most polluting industries. “The  materials I encountered during my journey across Africa are super organic, but nobody wants to use them because they are not ‘on trend’ or modern enough for people with a colonized mindset.”

This environmental concern was a motivating factor behind Ogisi’s SS/2020 collection ‘Supreme Higher Entity’, which featured pieces made from bark cloth. While developing the collection, Ogisi’s internal design brief was informed by a series of open-ended questions. “I wanted to ask: What were we dressing in before? What materials were we using?” she says. “As I traveled more across Africa I started to understand more. Some materials were created out of literally nothing with just a heat or water technique, like bark cloth which you can find in Uganda but also in Cote D’Ivoire.”

Initially it came as a surprise to Ogisi that similar methods and materials could be found in opposing ends of the continent. Now, having researched extensively, she theorizes that this is due to African nations existing without hard borders. Commerce that predated the European colonial project—such as the trans-Saharan trade route—also allowed for different knowledge systems to be shared. Ogisi’s research on weaving techniques also supports this theory. “You can find female weavers in East Africa doing two meters wide of fabric and men in West Africa still sticking with their 7 inches or at least 10-inch-wide looms,” she explains. 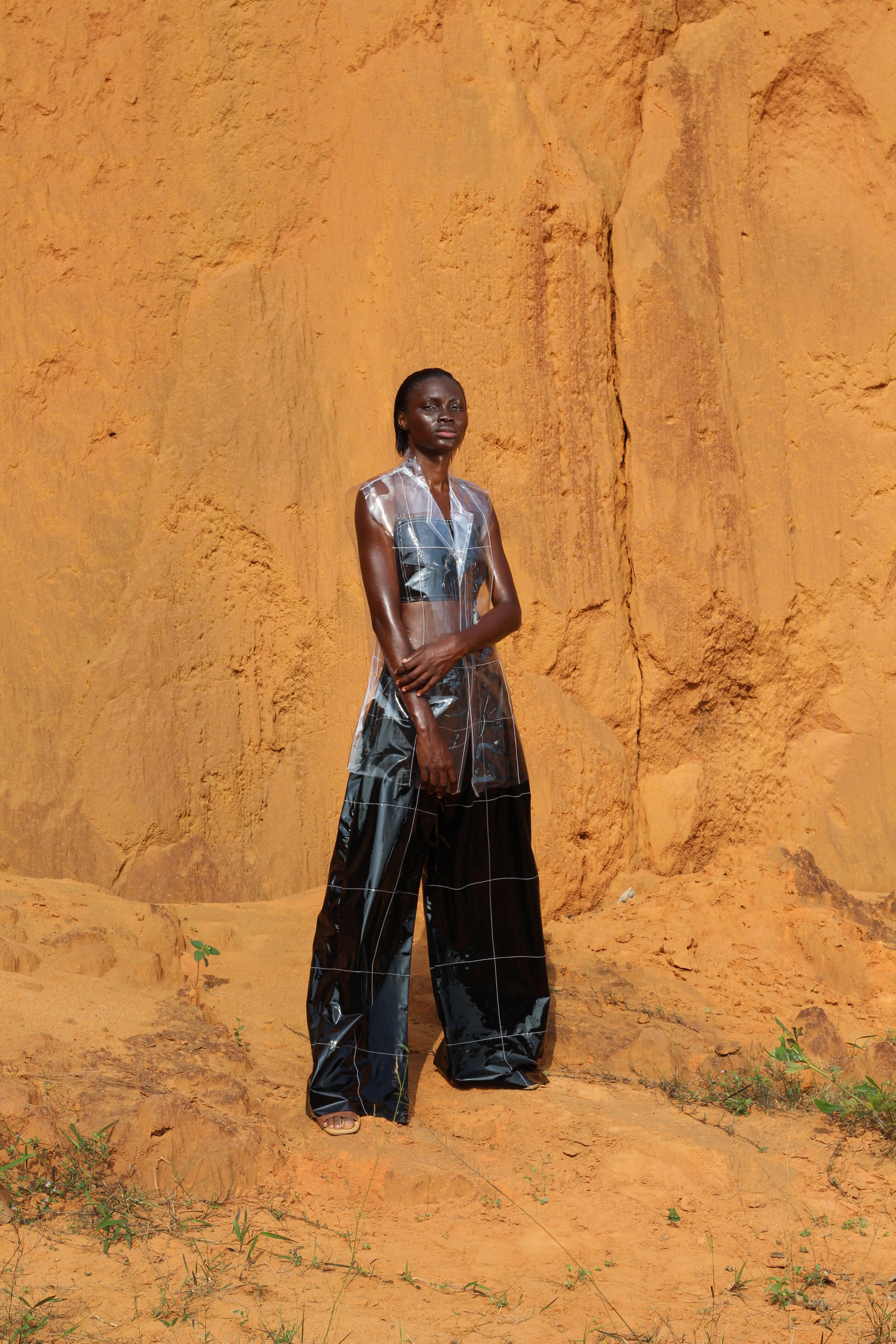 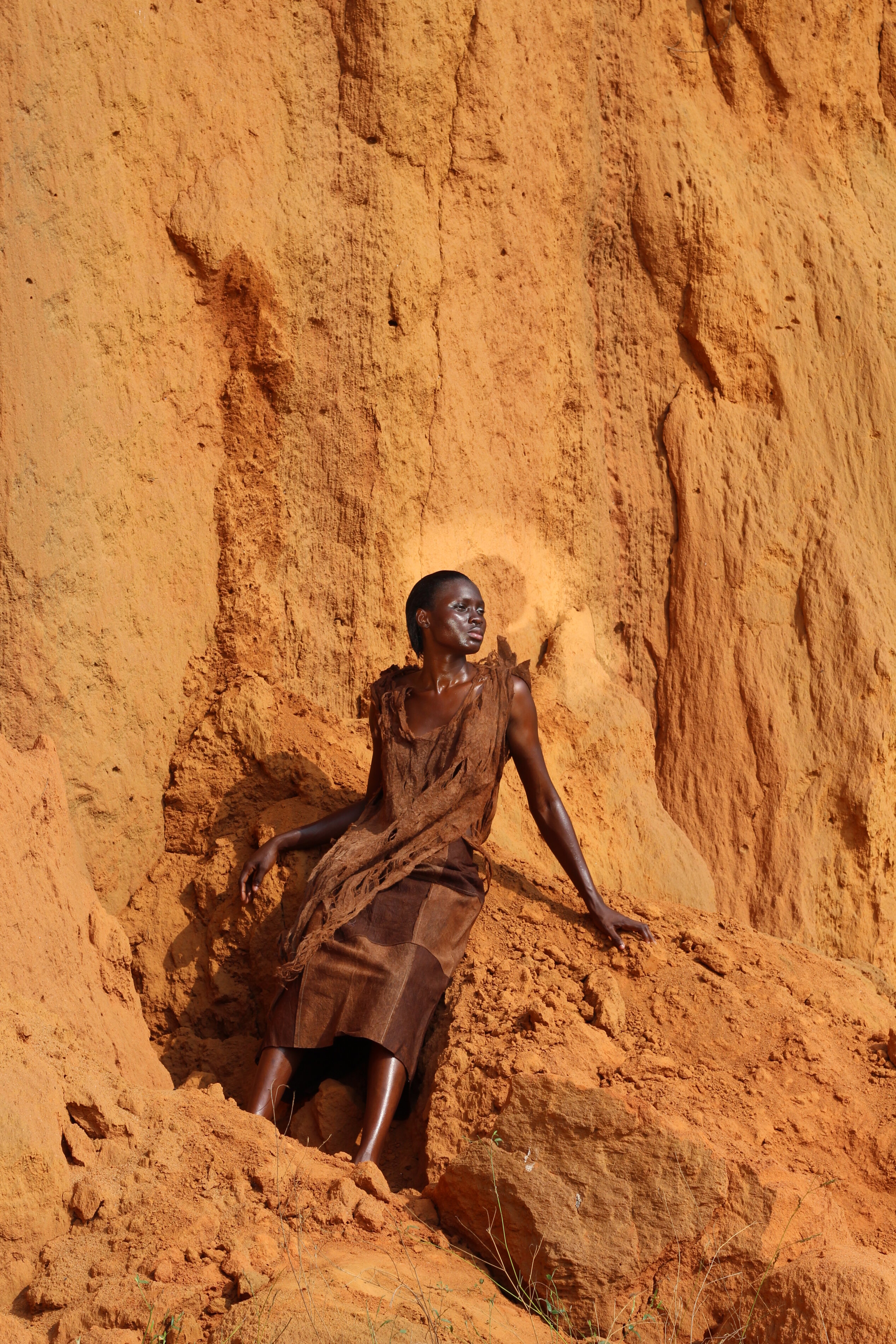 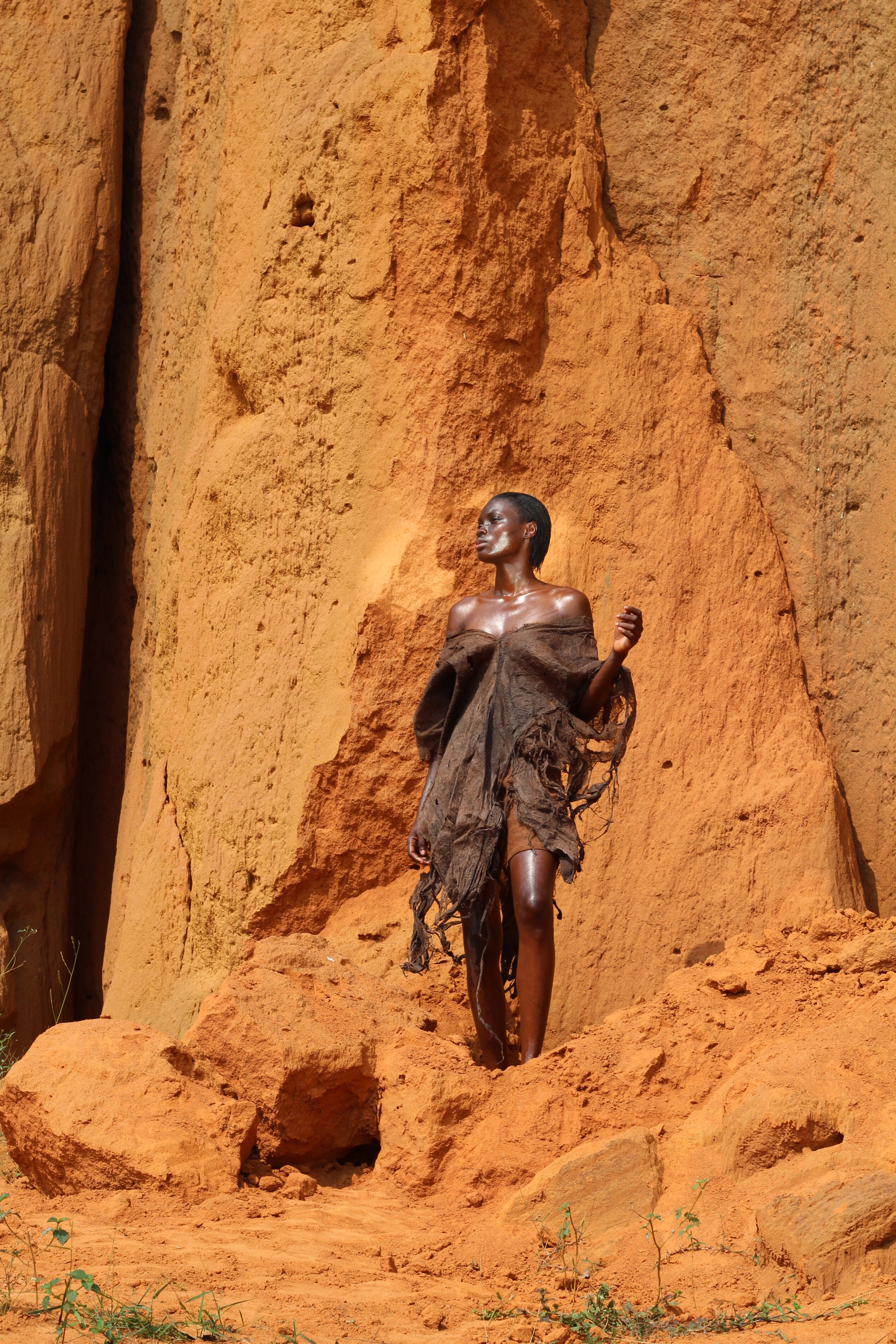 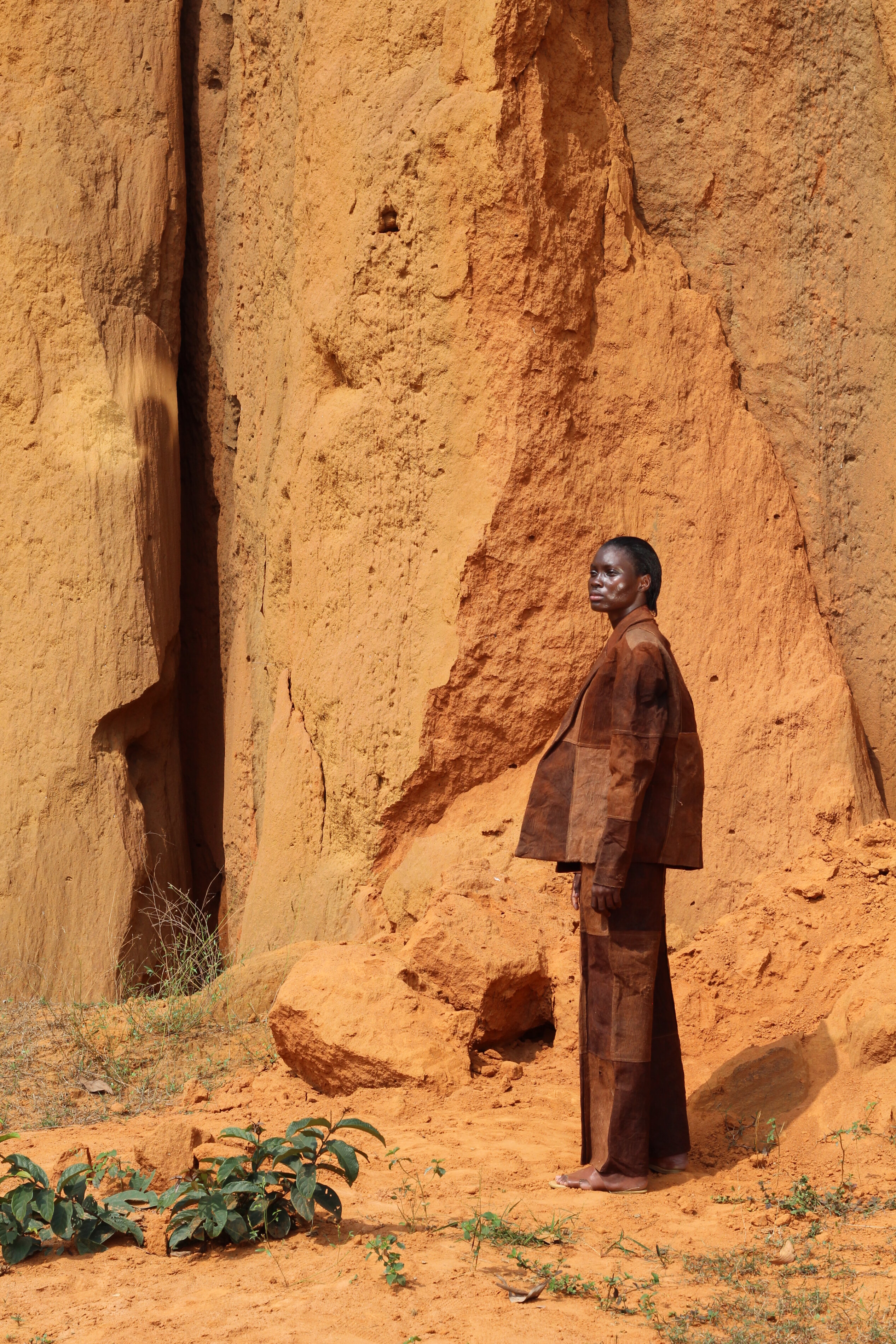 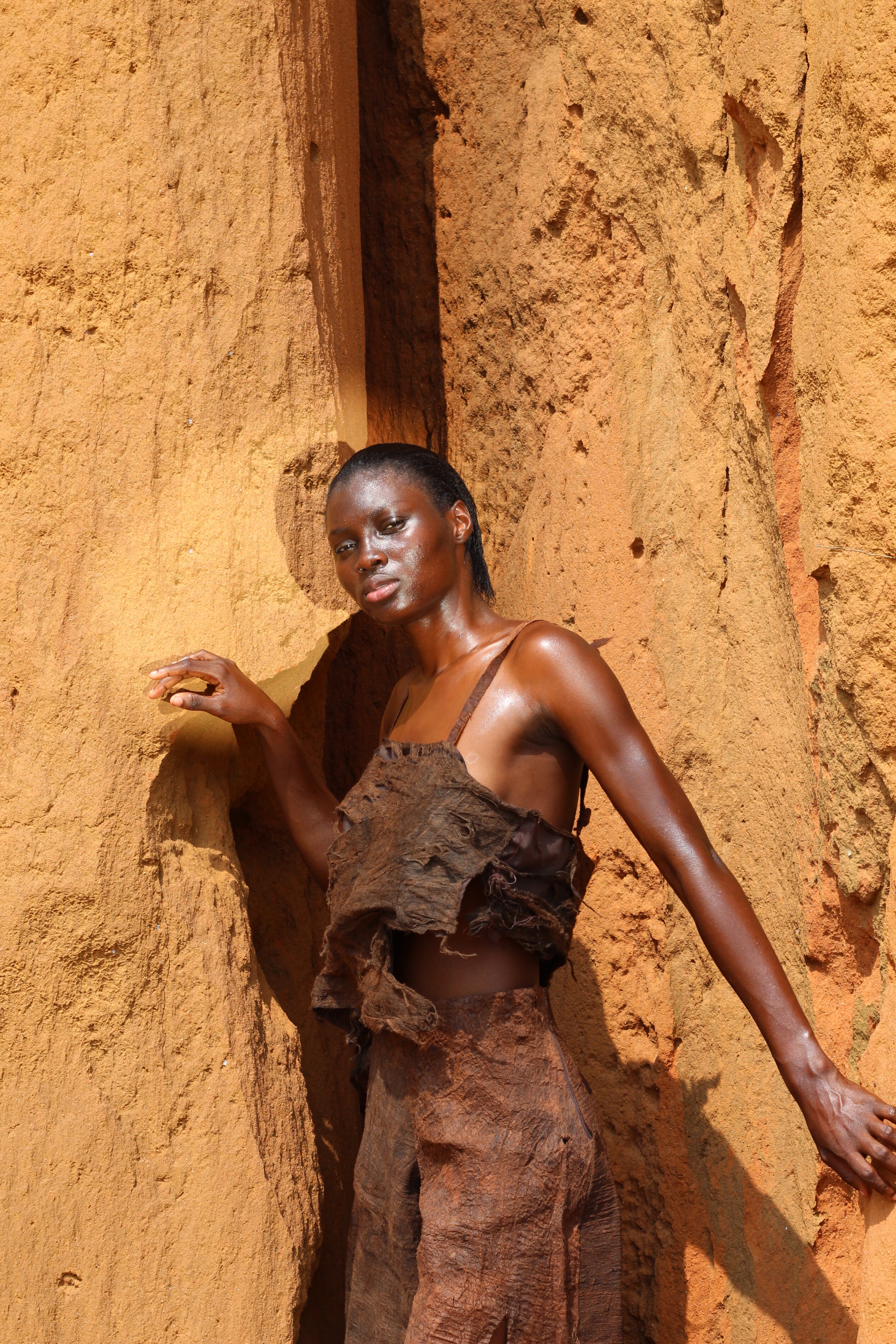 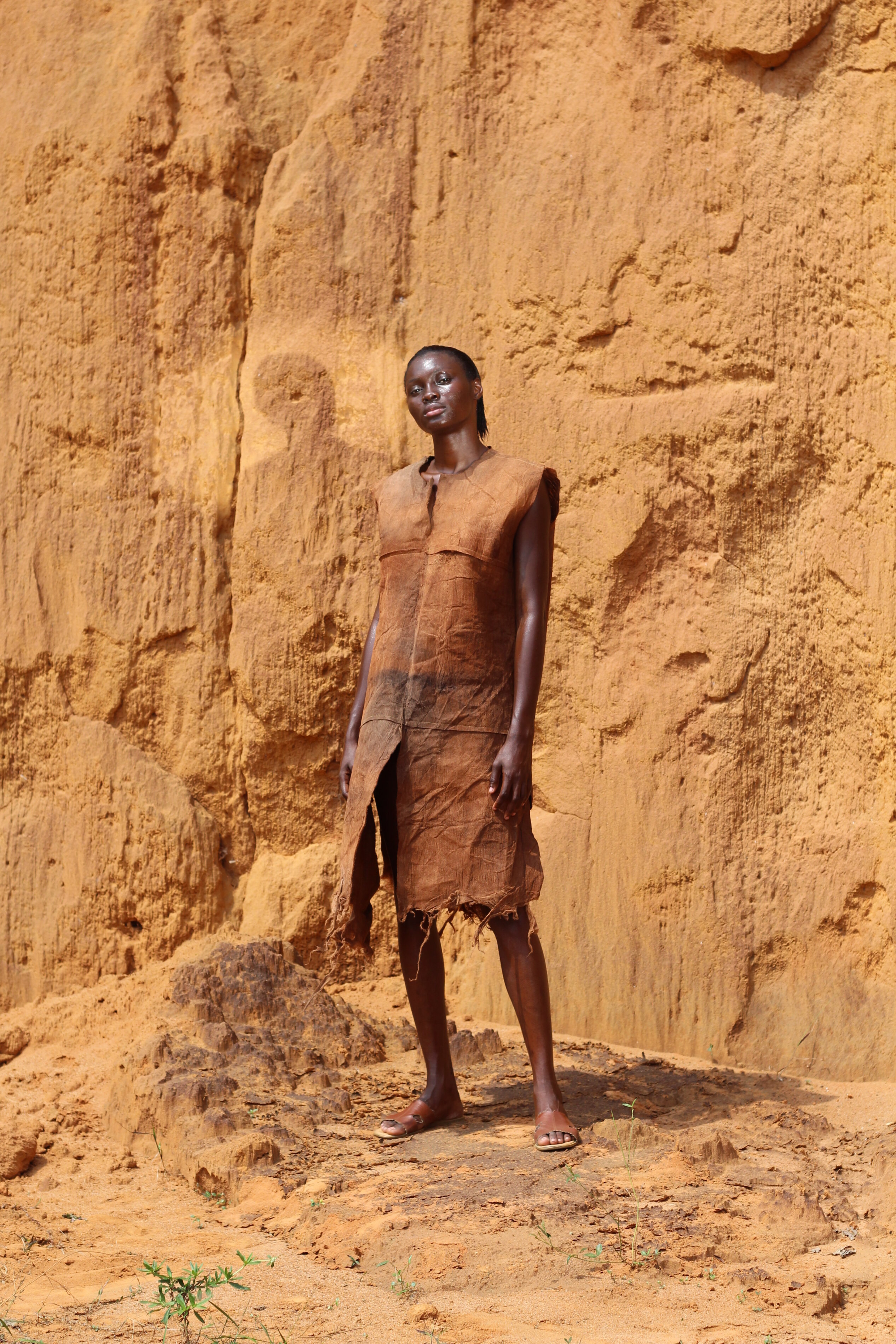 “The materials I encountered across Africa are super organic, but nobody wants to use them because they are not ‘on trend’ or modern enough for people with a colonized mindset.”

Ogisi, for her part, has injected different weaving techniques into a number of her collections such as ‘Gods of the Wilderness’ for SS/19. “It was based on how animals influence masquerades,” she says, referencing the traditional African ceremonies or dances executed by masked performers to provide entertainment, define social roles, and communicate religious meaning. “I made it in Cameroon and Kaduna, so I used a lot of handwoven wool and cotton… I love the idea of anonymity. I wanted to understand how textures and animals inspire performance pieces.” The fearlessness to reference Africa’s animist religious past is not only a marker of Ogisi’s unique approach, but also her insatiable intellectual curiosity. “I guess with my work it is a case of asking: what is the next material that is considered bizarre and crazy and that can be worn?” she says, laughing and referencing her AW/2020 collection ‘Chasing Evil’ which juxtaposed Congolese traditional raffia fabrics with recycled cotton. It also included a seminal jewelry collaboration with Kenyan creator Brian Kivuti featuring camel bone and brass pieces.

Ogisi does not see Africa through an entirely historic or romantic lens, however, as the realities of modern living—including the omnipresence of plastic, waste, and environmental degradation—have also found a place in her discourses and designs. Her most recent collection for SS22, ‘Green Water, Blue Forest’, for example, merged the manmade with the organic. “Our recent collection had to do with crocheting plastic, but also texturizing it and then weaving with hemp fiber,” says Ogisi, explaining the latter is a material that has long been looked down upon. “The hemp fiber was from Malawi. I guess it is always about finding the balance between these two worlds.” Living with our perceived mistakes and thriving despite them is a natural part of the human condition. Through clothing, Ogisi demonstrates that our collective reliance on plastic can be both acknowledged and embraced if it is used anew rather than cast aside. 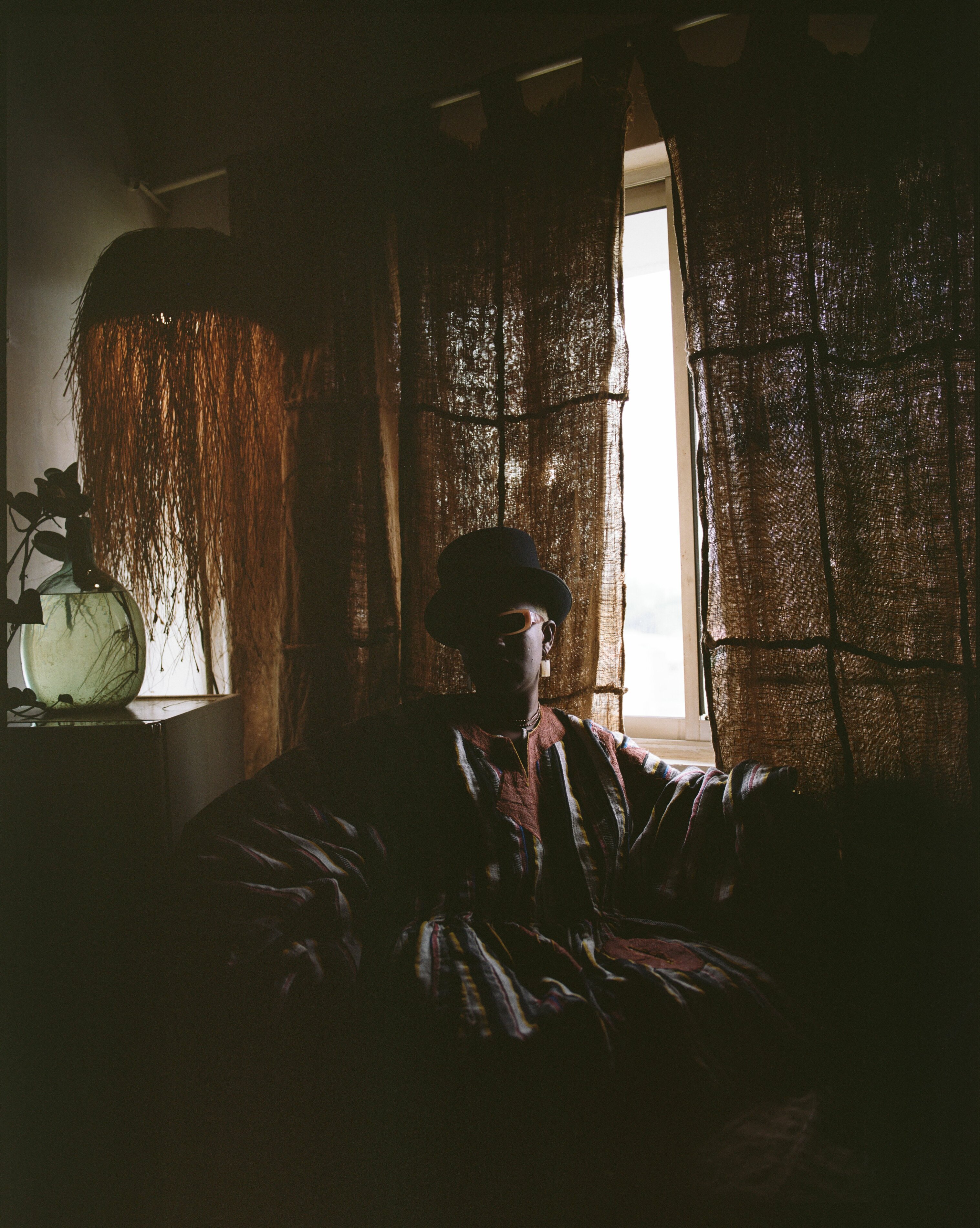 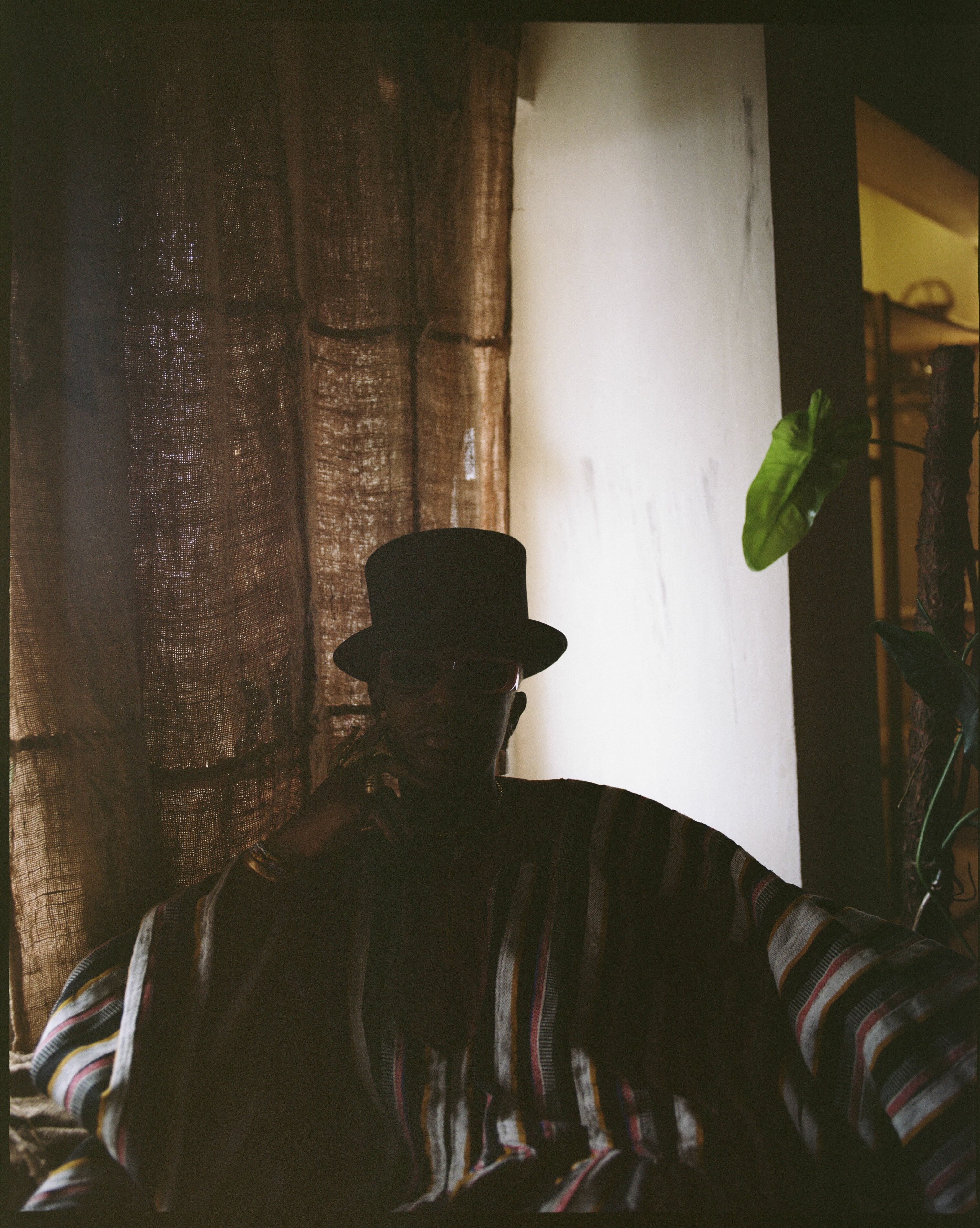 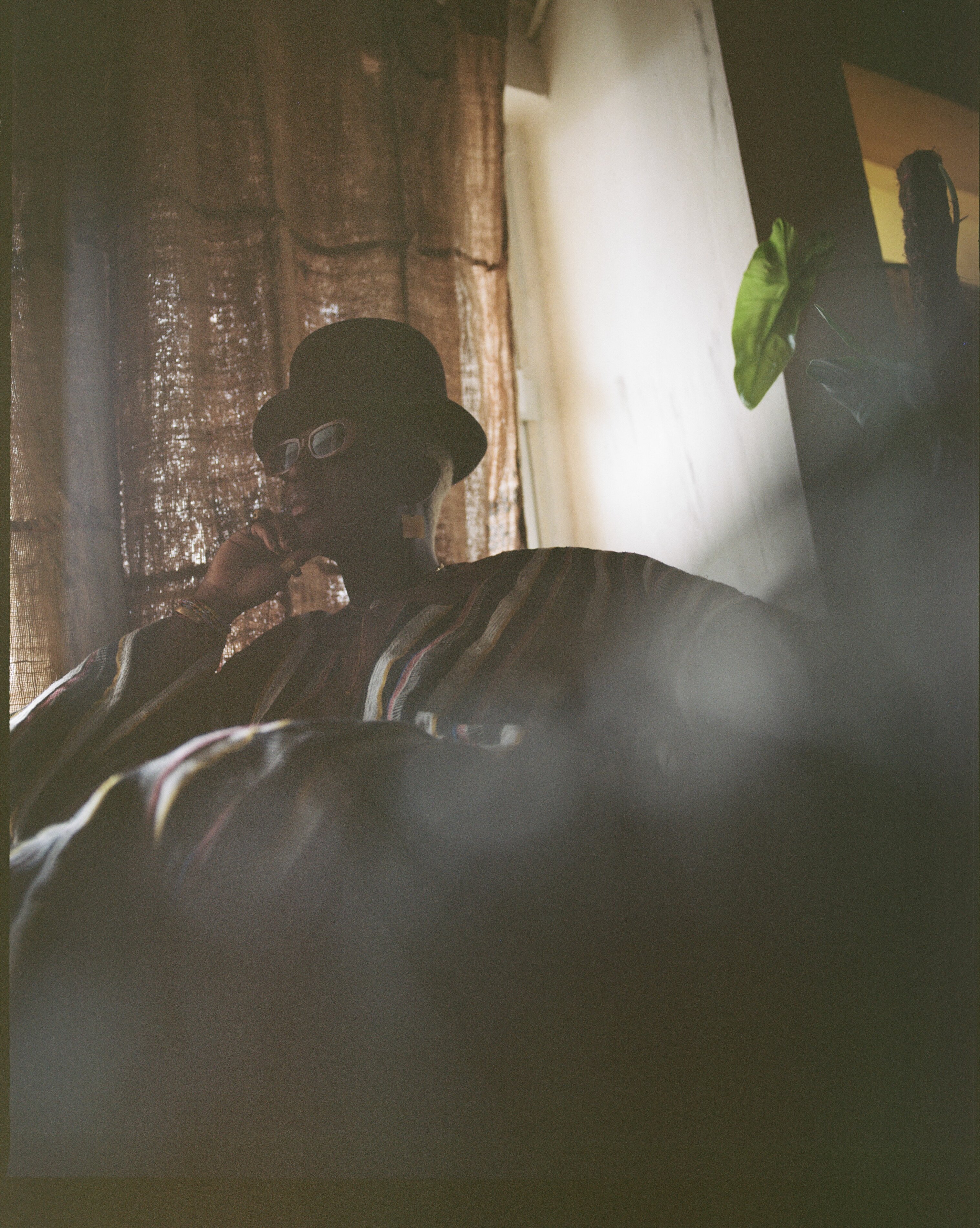 “My dream was to be an artist. My mode of expression just happens to be my body and the things that I wear.” 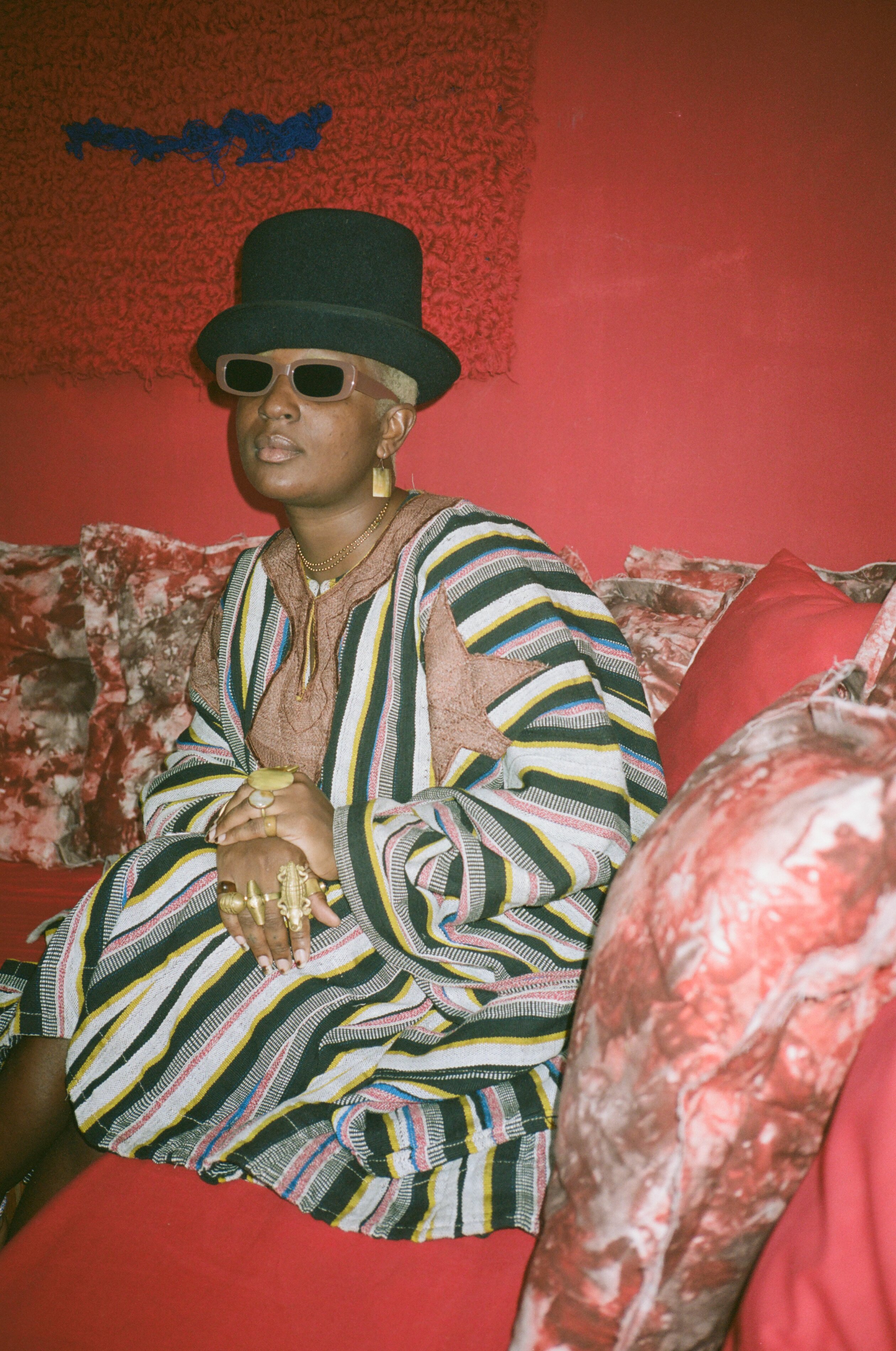 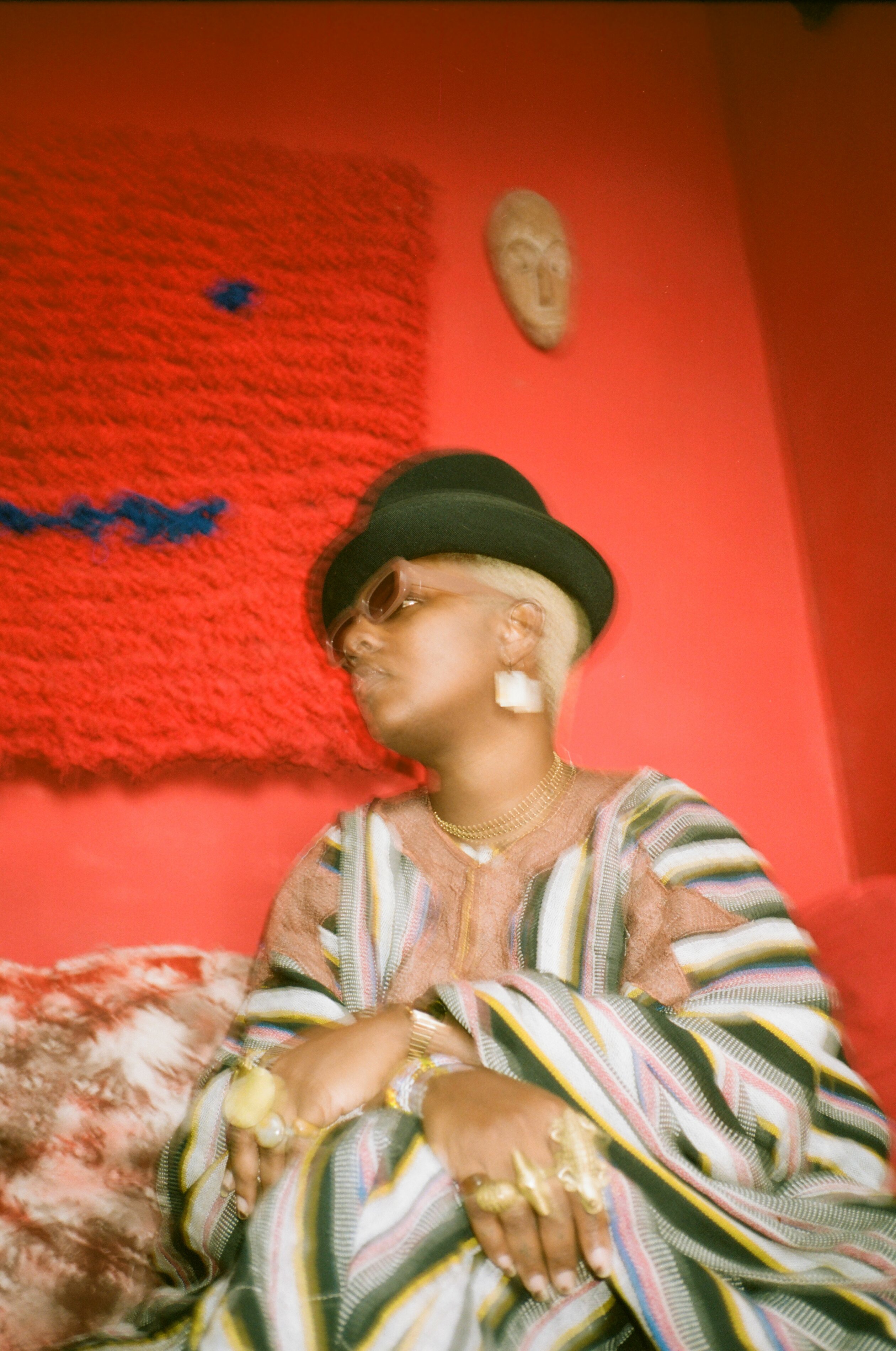 While her collections have brought a disruptive energy to notions of African aesthetics, Ogisi’s approach is born out of an expansive approach rather than a desire to produce sell-out collections. “I have always felt like more than just a fashion designer,” she says. “From the beginning, my dream was to be an artist. My mode of expression just happens to be my body and the things that I wear.” Ogisi’s work directly intersected with the art world in her recent exhibition ‘Here there and Everywhere’ at Leeds Tetley Gallery.

During her AW/18 collection, ‘Who, what, where’, Ogisi considered: “what if what I am creating right now is sort of a cult or a religion? Am I designing pieces for my congregation?” she says laughing. While Ogisi doesn’t actively seek devotees per se, her brand has birthed a community and an interdisciplinary movement closely aligned to it. Her studio has become “a safe space for creatives,” the aforementioned tri-coloured area beyond it “a clandestine space called Hidden Bar. You wouldn’t know about it if you weren’t part of the IAMSIGO family.” The studio often plays host to impromptu nights where underground artists, designers, musicians come together alongside global superstars at Ogisi’s invitation. “We’ve had so many people come through our doors. We’ve had Gabriel from Berlin, DJ Fui from Ghana, and Bamba from Amsterdam,” she says. “We’ve also welcomed musicians including MI, Falana, and Asa, so the space has really fulfilled its purpose.”

Like many pioneers, Ogisi does not view her work as a legacy building exercise, but rather as an enabler for those seeking to champion variance. She winces when I suggest she is the quintessential cool girl, emphasizing that she’s much more interested in liberating people from colonized sensibilities than establishing her own image. “From the start I always told people there’s the brand, there’s the work, and there’s the world that exists between all of this. My work is to free up people’s minds.” As an African creative and cultural interlocutor, Ogisi is in a class of her own. Whether one chooses to wear her pieces or collect them as artworks, their value is destined to rise. 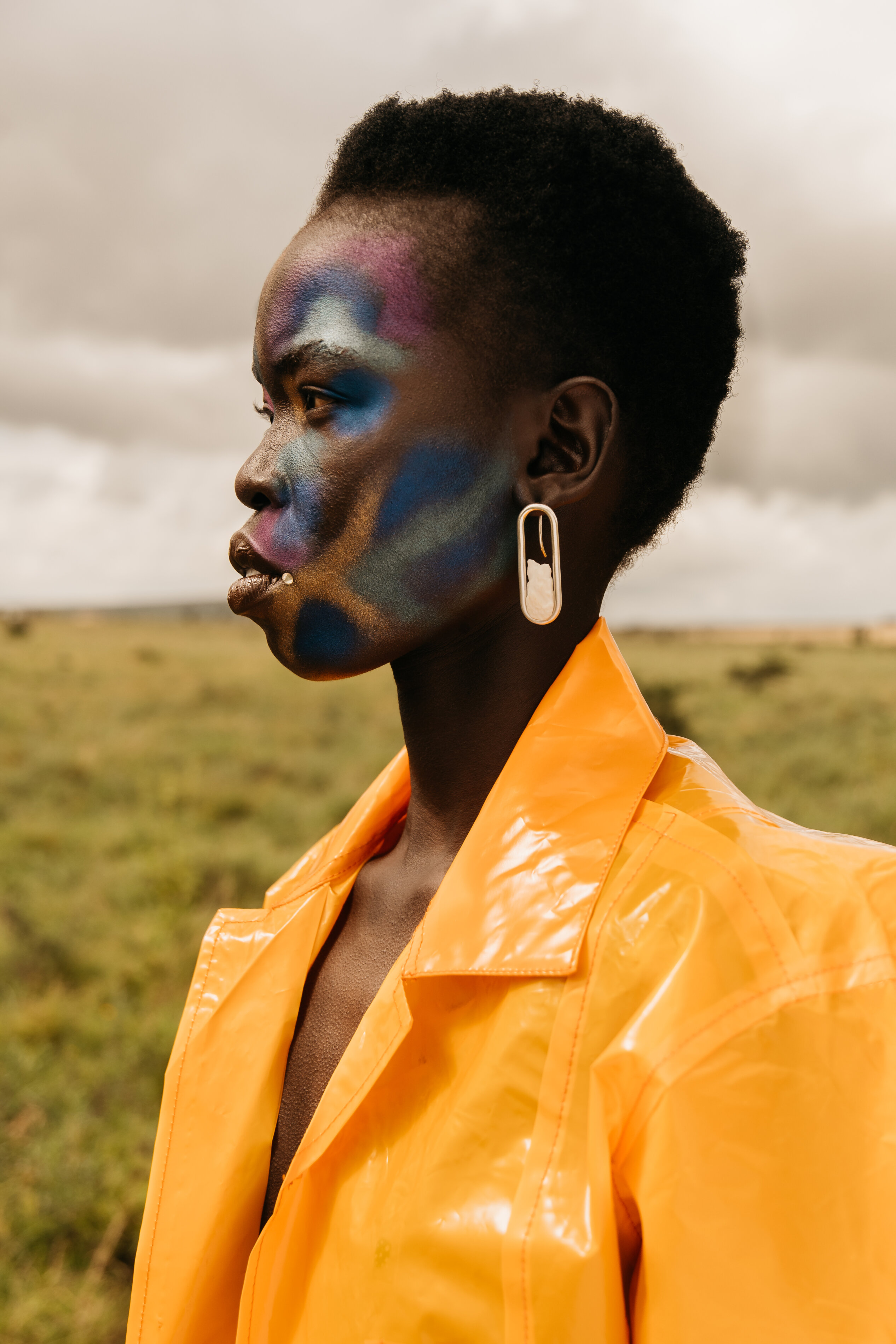 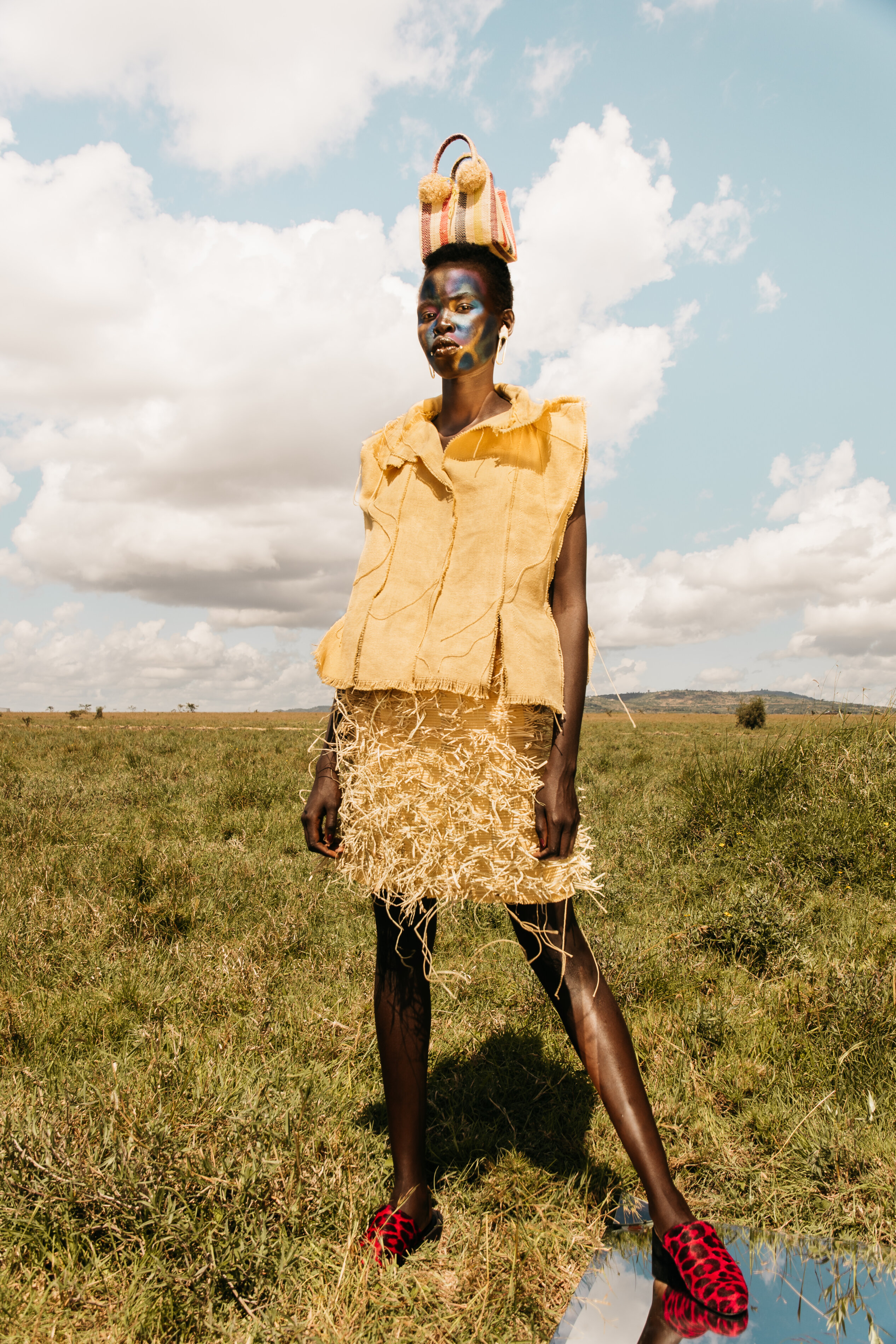 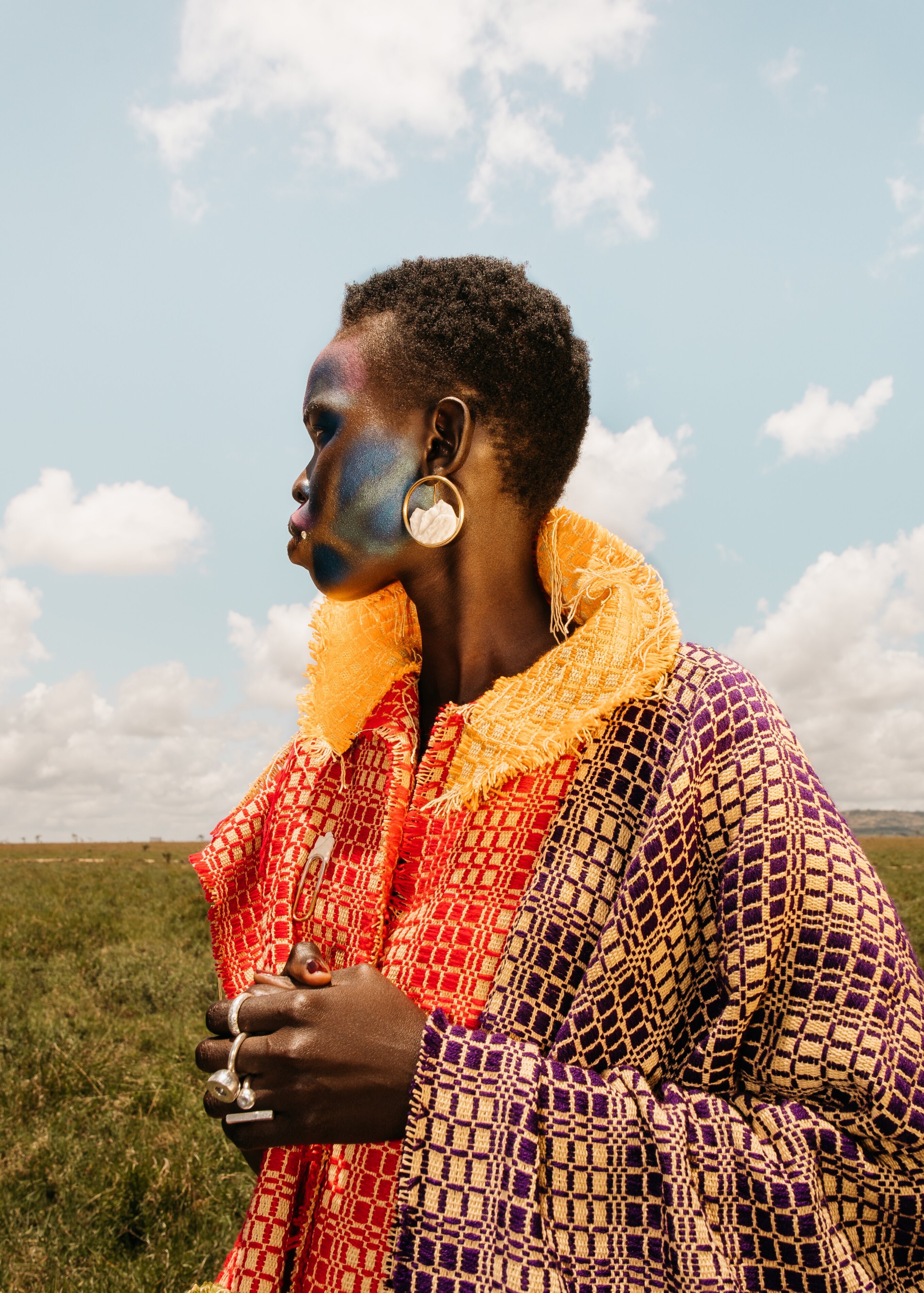 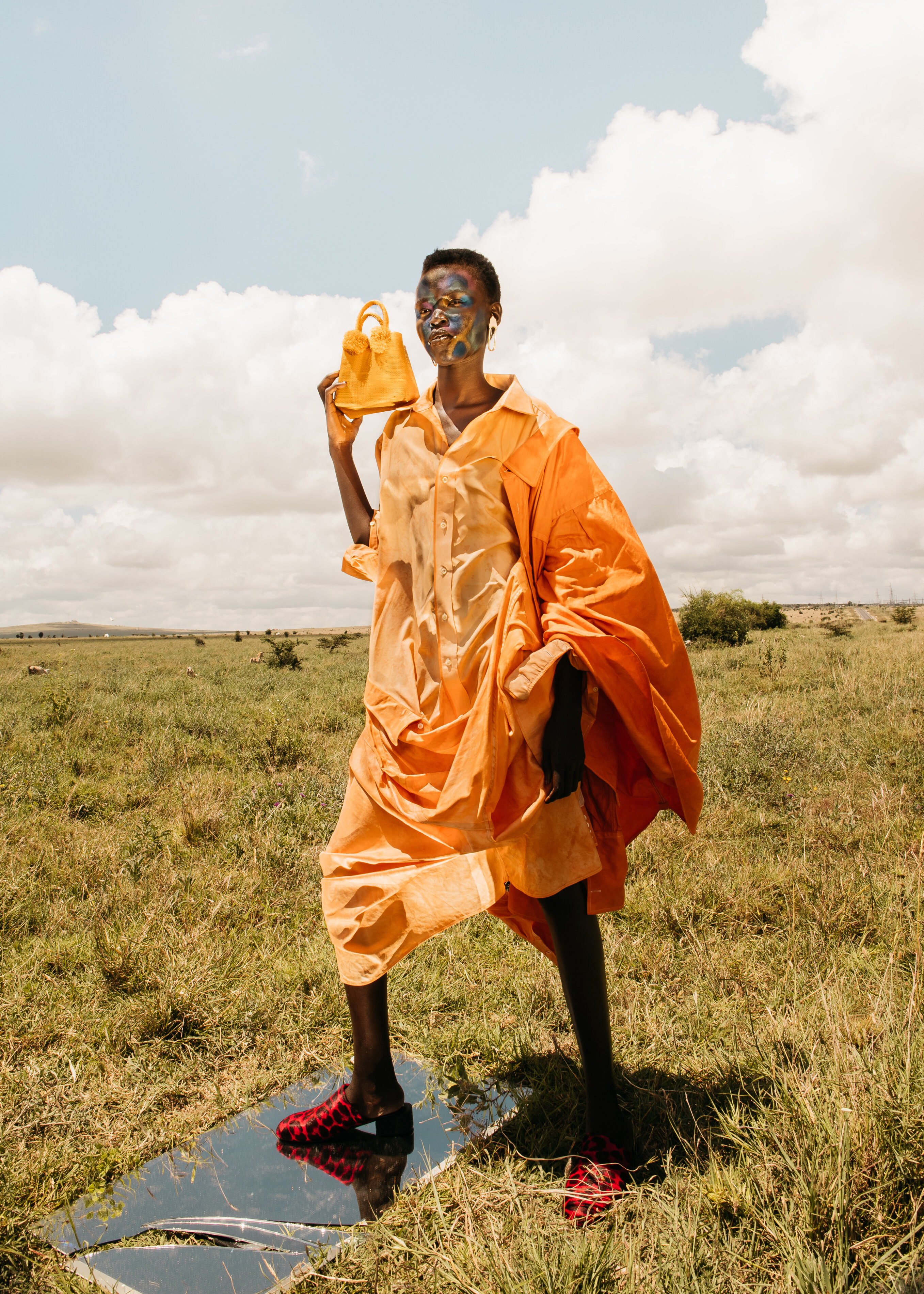 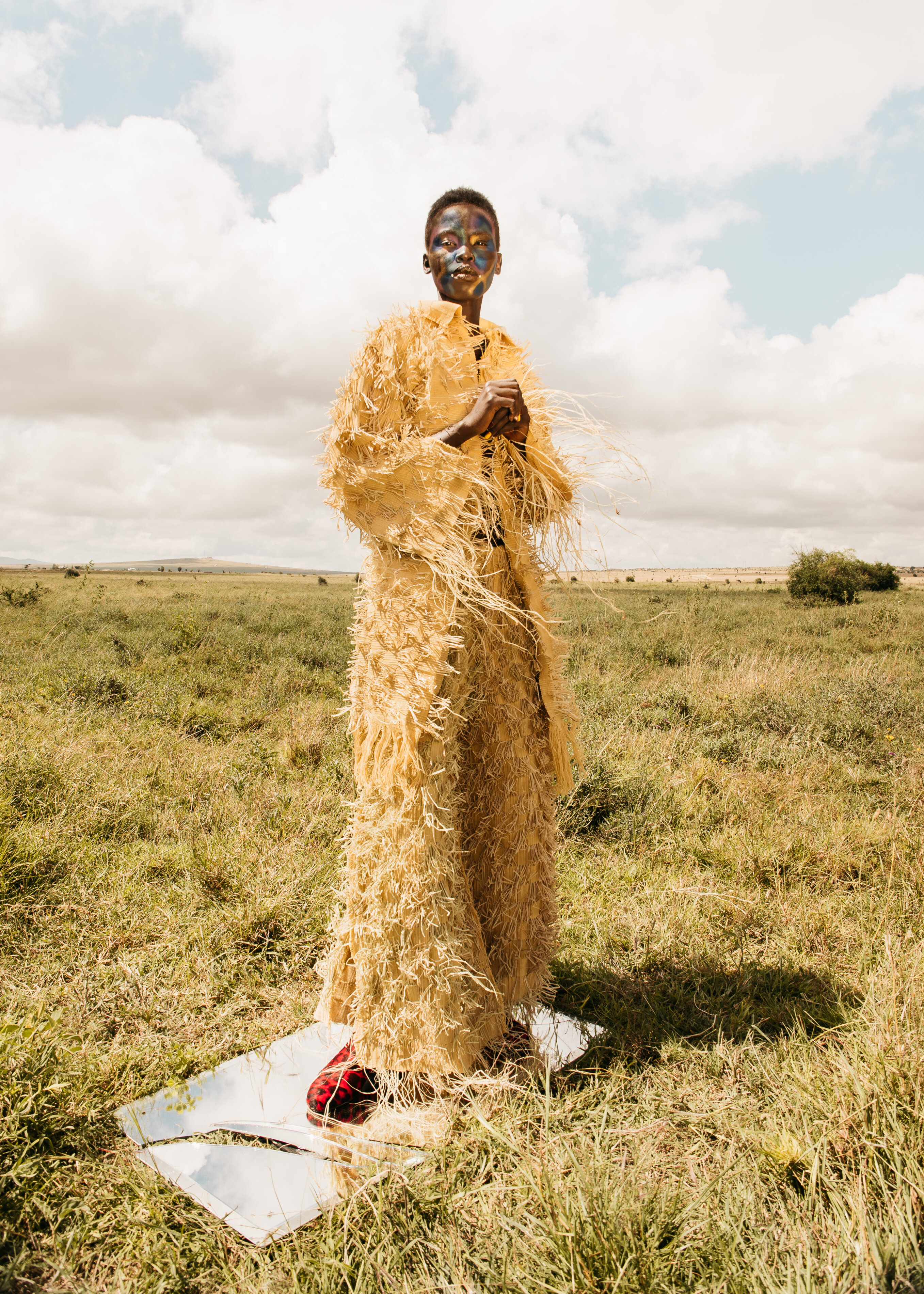 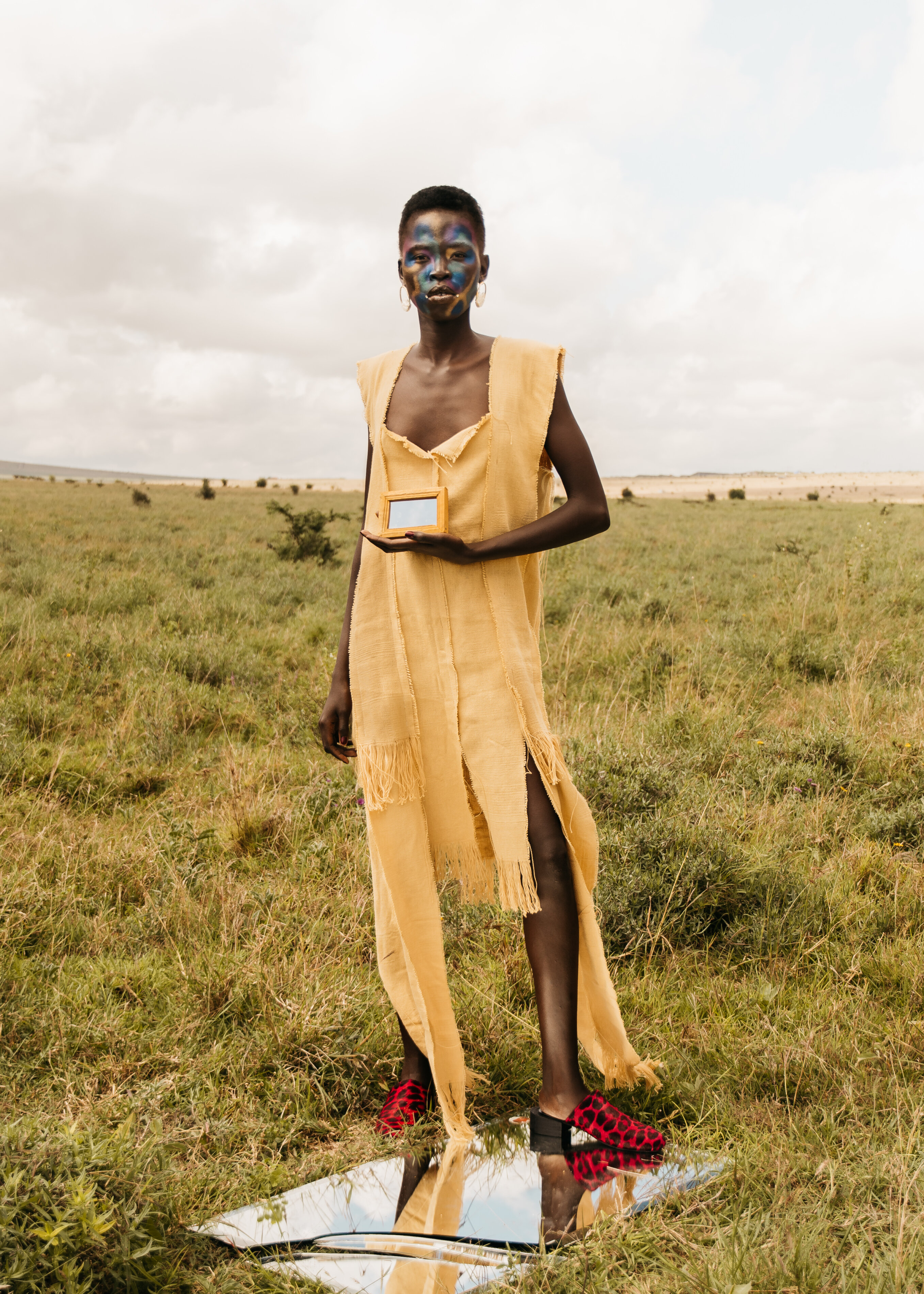 Bubu Ogisi is a Lagos-based fashion designer and the founder of IAMSIGO, a womenswear brand dedicated to preserving the ancestral textile techniques of her heritage. Find out more about her work by following her and her brand on Instagram.

This article was written as part of COLORS’ editorial coverage in line with a recent production period in Lagos, Nigeria in Spring 2022. Head over to our YouTube channel to watch the shows we produced with Nigerian artists, or to our editorial platform to read more articles such as this feature on the Lagos skate scene.