“Boss women”: An interview with Tasha and Tracie Okereke 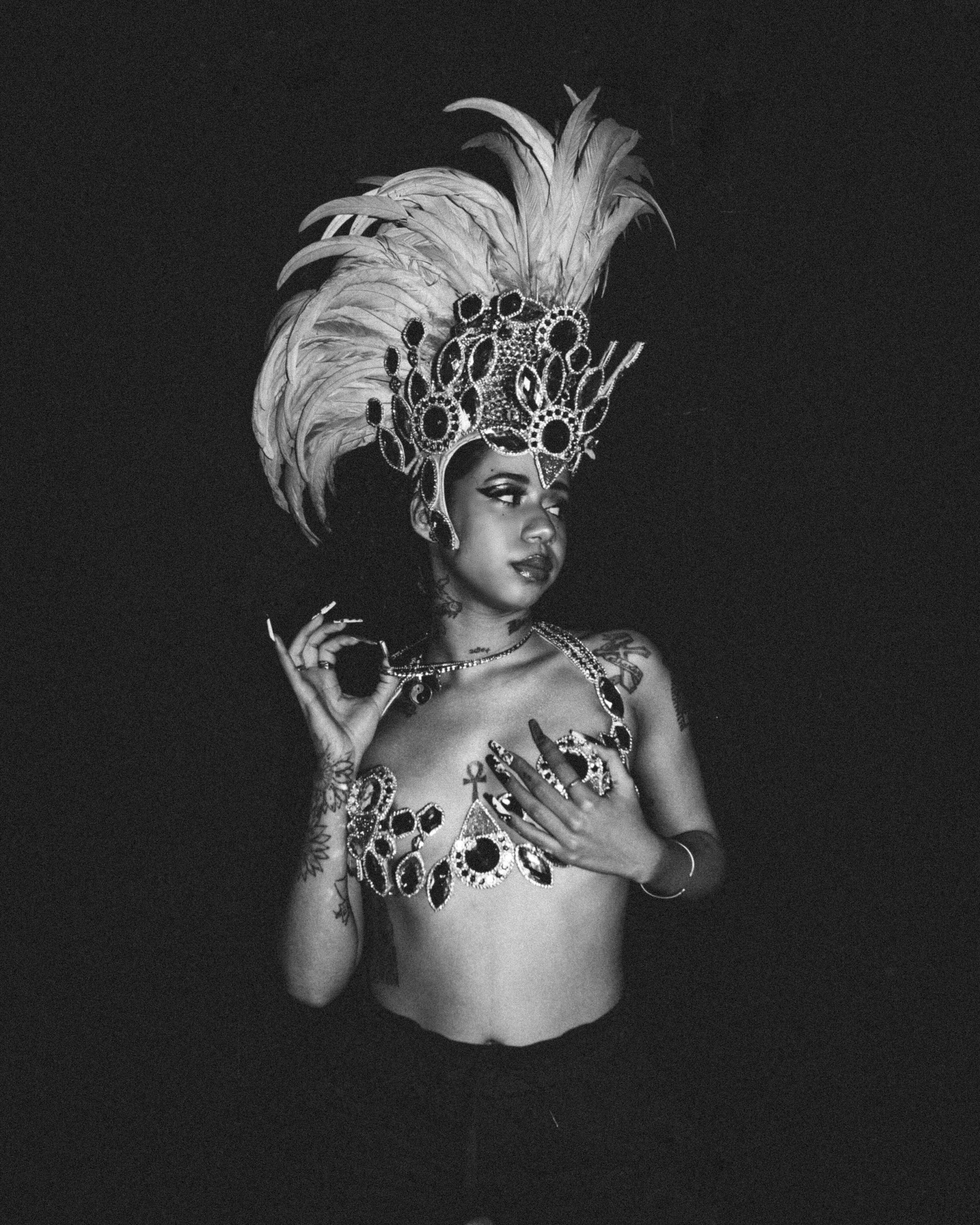 Funk is a musical rhythm mixing the American electronic funk of the 1980s with the most diverse influences of Brazilian music. Performed at wild parties, the scene is largely male dominated and many of the lyrics in songs are regarded as shockingly misogynistic. Despite this, various female funk MCs and DJs are emerging, reclaiming the genre and inspiring a new generation of independent Brazilian women. We talked to four of them to find out more about what funk means to them. First up is Tasha & Tracie Okereke, twins, fashion bloggers and activists, and an inimitable musical duo from Sao Paulo.

COLORS: How would you describe baile funk to someone who hadn’t heard of the genre before?

Tasha & Tracie: Funk is almost like an ancestral rhythm. Like hip-hop, it’s always reinventing itself. It’s rich and diverse… there’s nothing you can really compare it to.

COLORS: Do you remember the first time you heard baile funk music?

T&T: There’s this religious celebration in Brazil around June and July called Quermesse. During this time, there are free concerts in the streets in the quebradas, areas on the outskirts of the city. Everyone will go outside to meet each other and listen to music. Even people who don’t live in the quebradas any more come back to join in. We probably heard baile funk for the first time during one of these celebrations.

COLORS: Can you tell us about the funk music you create? How would you describe your musical style?

T&T: It’s important for us to mix new funk with older funk sounds as a way to preserve the history of funk in Sao Paulo. We also like to mix funk with rap, trap, grime, and drill. Our music is basically a mix of all the different genres we like. 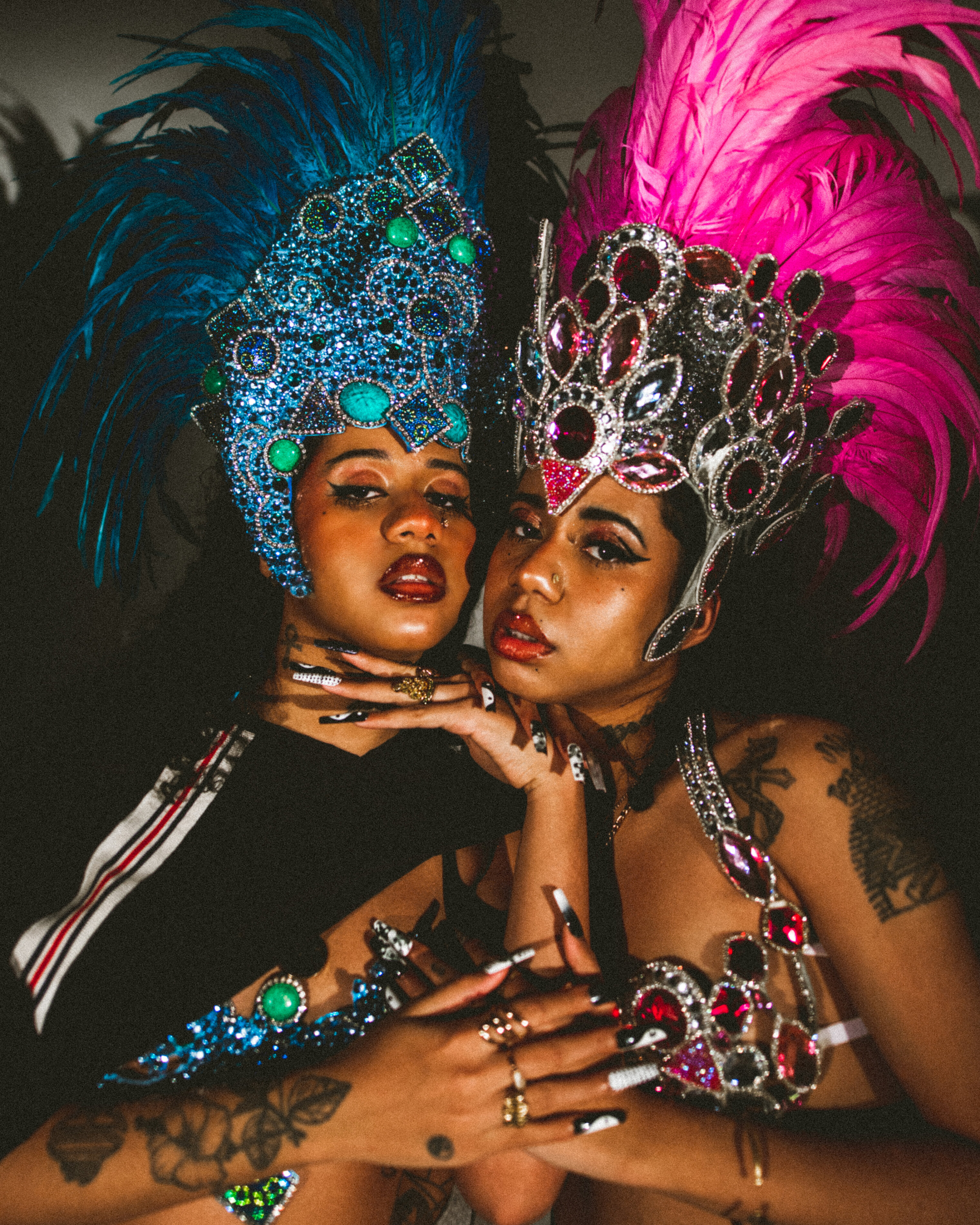 “We sell the boss woman image for people like us from the favelas.” 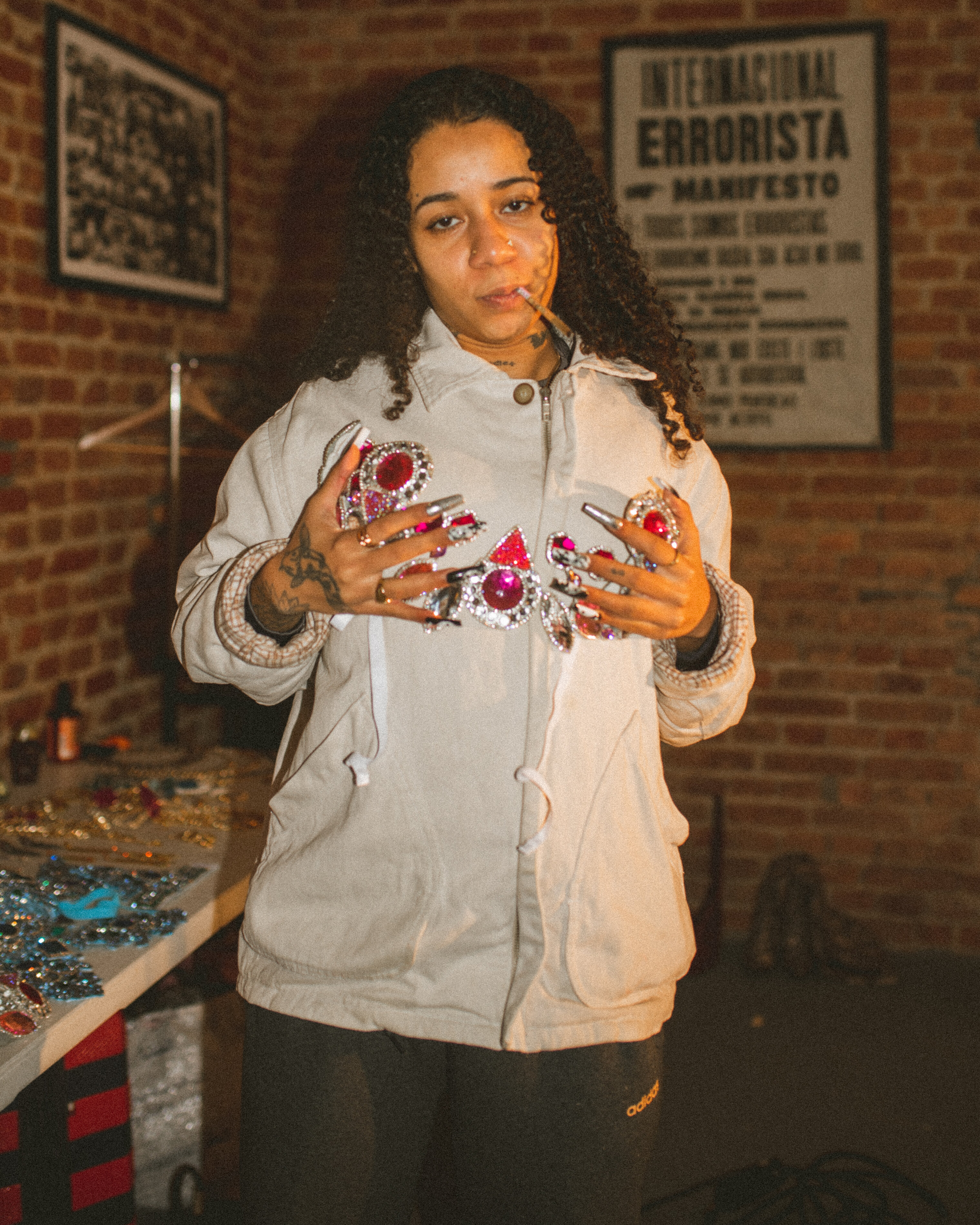 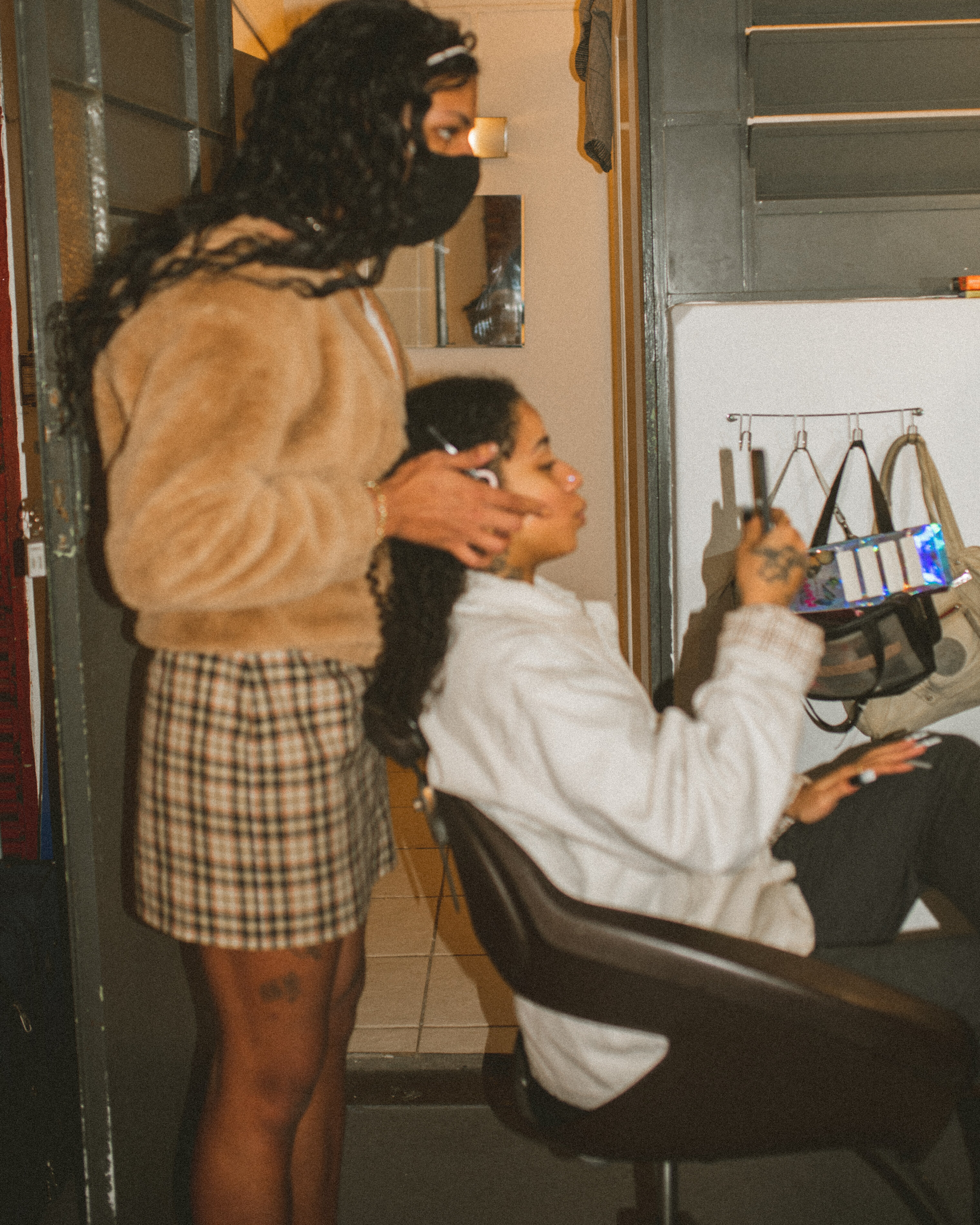 COLORS: Baile funk is a male-dominated scene. Is it tough to be a woman in this context?

T&T: The music industry has always been oppressive for women, as has society in general. When women become visible in the funk scene, they are listened to: in funk, your appearance and age really don’t matter. It’s about your voice, your music, and people’s ability to access it. But it’s the question of access and distribution that’s the problem, as most funk studios are run by men. New technologies are making it easier for independent artists, including women, to create music at home on their phones and release it on the internet, cutting out the middleman and going straight to the public. So things are changing.

In reference to funk lyrics, they do often include a lot of putaria—a conservative Portuguese term referring to swear words or dirty words in music—but when women sing them it feels empowering. It’s not the same as when men sing them about women.

COLORS: Do you want to be role models for other women and girls in Brazil? We know that outside of music you have a blog, Expensive Shit, which celebrates Black women from the favelas.

T&T: We are trying to be the reference that we wanted when we were teenagers, to sing the things that we needed to hear. We used to buy magazines and it was like looking into another reality. We wanted to see people like us, but there never seemed to be anyone or anything featured that was connected to our culture.

We want to make women feel like they can be independant. That’s the most important message we want to get across with everything we do. We sell the boss woman image for people like us from the favelas. We want to speak to the girls who work in supermarkets, or the girls who don’t have a lot of money, but that always manage to pay their bills, get their nails done, and that don’t need men to take care of them.

“We are trying to be the reference that we wanted when we were teenagers.”

COLORS: Do you have any favorite lyrics from your songs that embody this message?

T&T: In our song, ‘Mpif’, there are three lyrics that we always love to sing: “always act like the boss of the place,” “never put your head down,” and “they want us as their muses but they’re afraid of us as artists.”

COLORS: Are there other female MCs you look up to? Do you receive a lot of support from other women in the funk scene?

T&T: The funk and the rap scene are quite connected in Brazil, and we receive a lot of support from women from both styles. Female MCs in mainstream funk are more “pop”: they are usually white and have long hair. The amount of Black women singing funk is still small, and they usually perform in the hood rather than on the radio. LUDMILLA is a great artist who is both mainstream and plays in the favelas. She’s with the same label as us. But MC Dricka is the biggest female funk MC in Brazil right now. 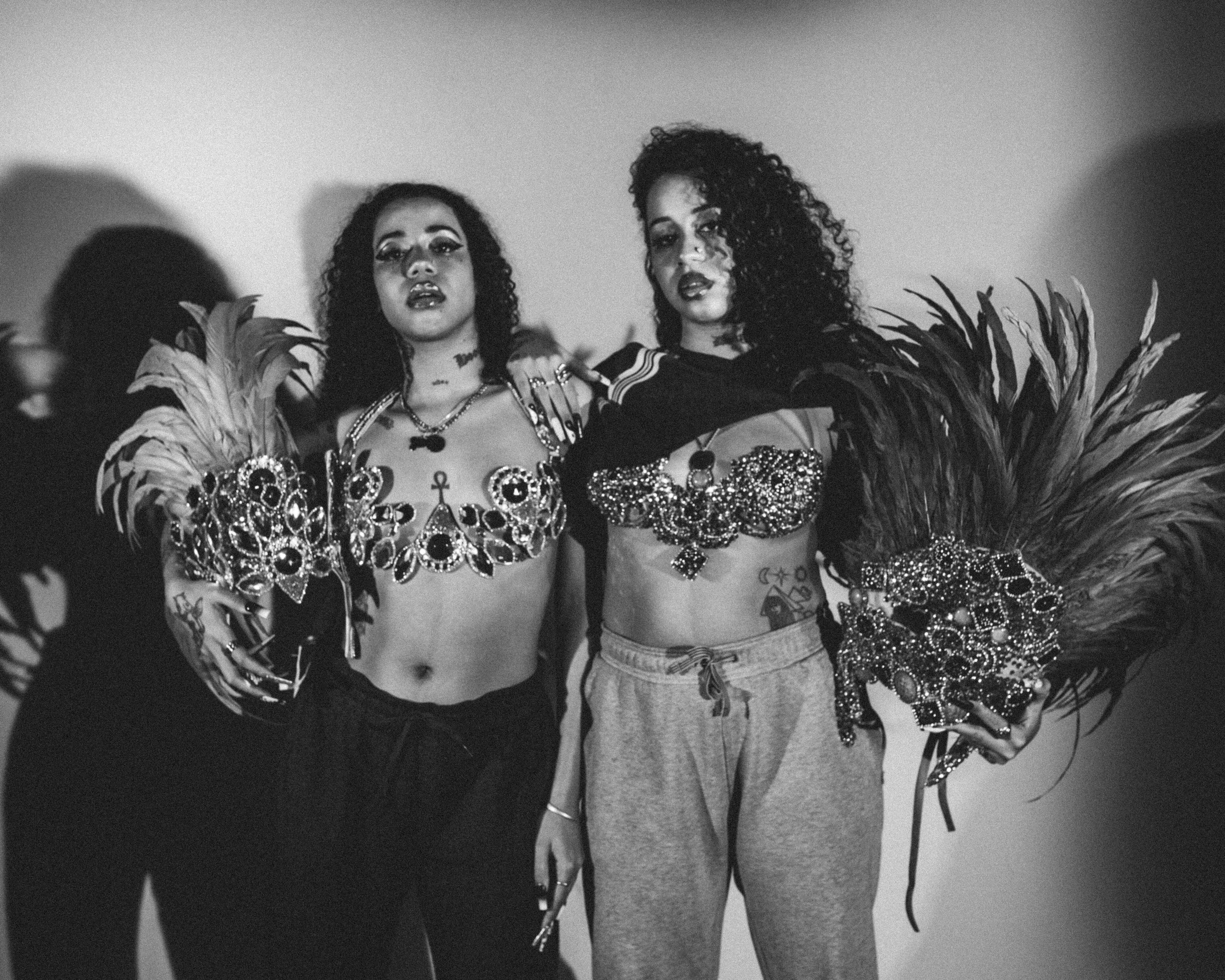 Tasha & Tracie are female baile funk MCs based in Sāo Paulo. Follow them on Instagram, check out their fashion activism blog, Expensive Shit, to find out more about their work.

This interview was published as part of a series on female baile funk MCs and DJs in Rio and Sao Paulo as part of COLORS’ editorial coverage running alongside our 2021 production period in Brazil. Stay tuned for the next two interviews in the series! In the meantime, why not check out some of the Brazilian artists we’ve produced shows with on our YouTube channel?