“My life in abundance”: An interview with São Paulo-based curator, writer, stylist, and director Ode 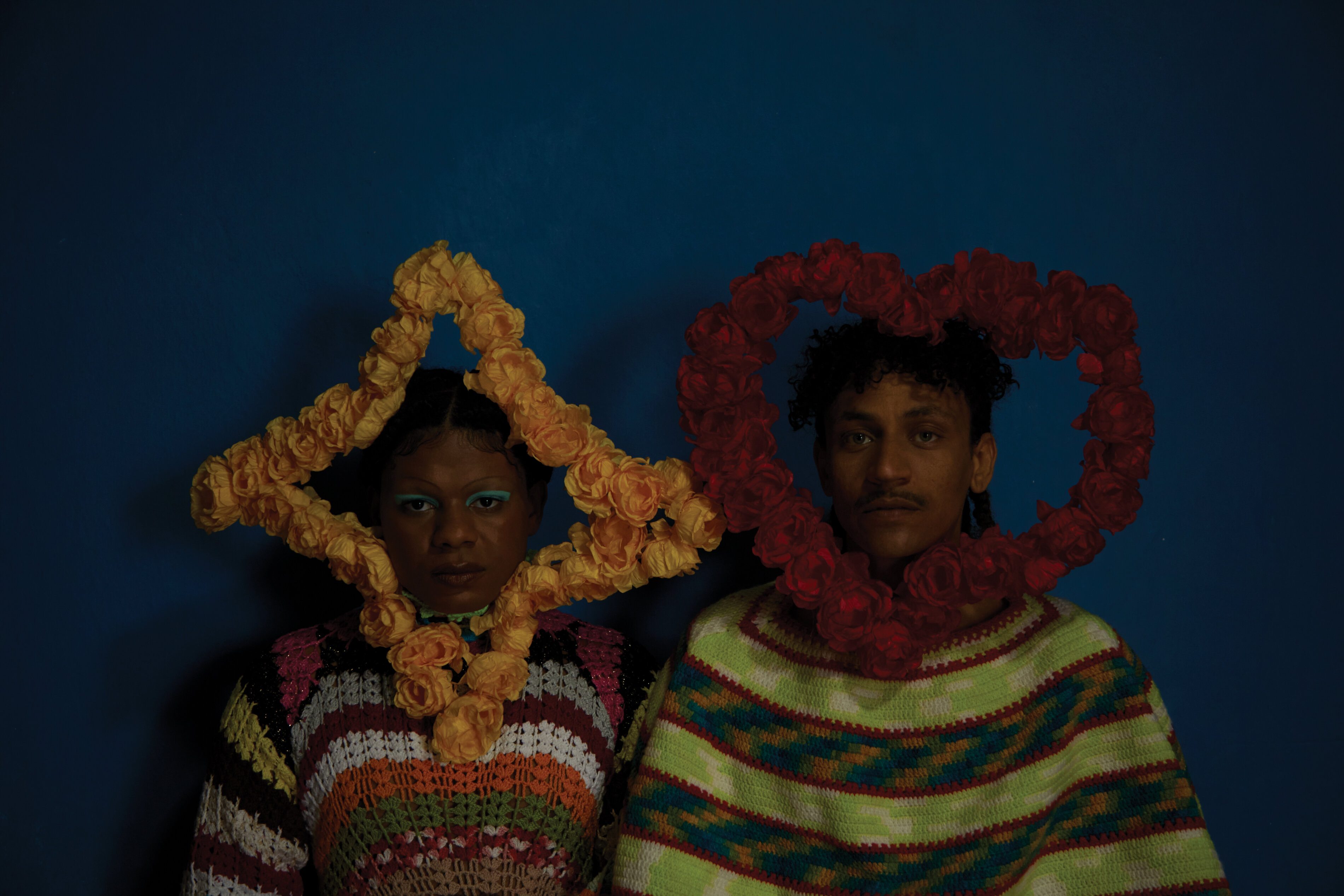 Ode is a curator, writer, stylist, and director based in São Paulo, Brazil.

Ode is a curator, writer, stylist, and director based in São Paulo. Her work explores a wide range of themes including racism, transphobia, the body, saudade—a deep emotional state of nostalgic or profound melancholic longing for something or someone—affective memory, therapy, and transmutation. She has written for the likes of Dazed, Bubblegum Club, and Nataal—for whom she curates a series on Brazilian photographers—and in June 2021, she also curated Notes on Travecacceleration, an exhibition at Lux, London.

For COLORS’ Brazilian editorial coverage, anthropologist, researcher, and writer Monique Lemos spoke to Ode to discover more about her multifaceted ouevre, from her quest to define what it means to be Brazilian to the prominence of religious symbols and iconography in her work. They also discussed how she aims to represent and unpack the “travesti” experience, and her dreams of a safer, brighter future for her community. Discover the full feature, as well as photographs of Ode with Various friends, below.

Ode is the definition of a 21st century multi-hyphenate. A curator, writer, stylist, and even film director, she frequently works on a wide variety of multi-disciplinary projects. In 2021, for example, not only did she release her film Restituição—an unpacking of the emotional and transformative journey of travestis, a South American gender identity—on SHOWstudio, she also curated Notes on Travecacceleration at Lux, London.

The artist’s first ever institutional exhibition, Notes on Travecacceleration featured sound and moving-image works by seven of her Black, trans peers from Brazil, as well as her own self-directed film created in collaboration with Ikaro Cavalcante and Joaquim Ramalho. With the same name as the exhibition itself, “the video was supposed to act as the curatorial text for the show, and to offer context to visitors in a more dynamic way than just printing information on a sheet of paper,” says Ode, adding that she recently gave a lecture about the work at SP-Arte, the biggest art fair in Latin America.

Outside of the visual art sphere, Ode has worked extensively across fashion and music: she directed art and styling for multidisciplinary artist Ventura Profana’s concert Mais Que Abundante at Pivô art center in São Paulo, and designed an album cover for Céu, one of the most exciting singers in the Brazilian music scene. 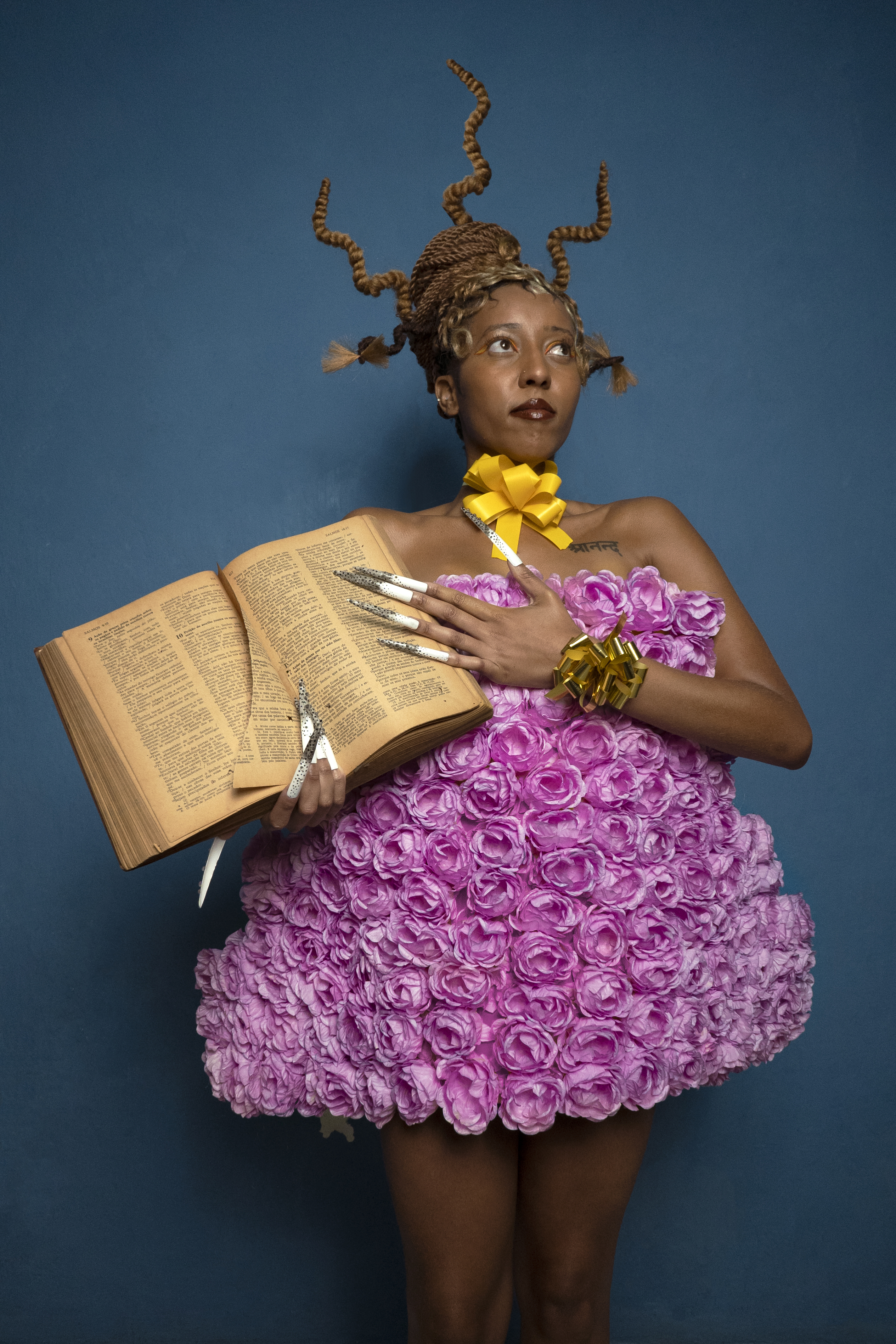 Alanda Monteiro is a beautician Ode met in her hometown and styled for this COLORS photoshoot.

“I want to tell Brazilian stories without them being filtered through a Eurocentric lens.” 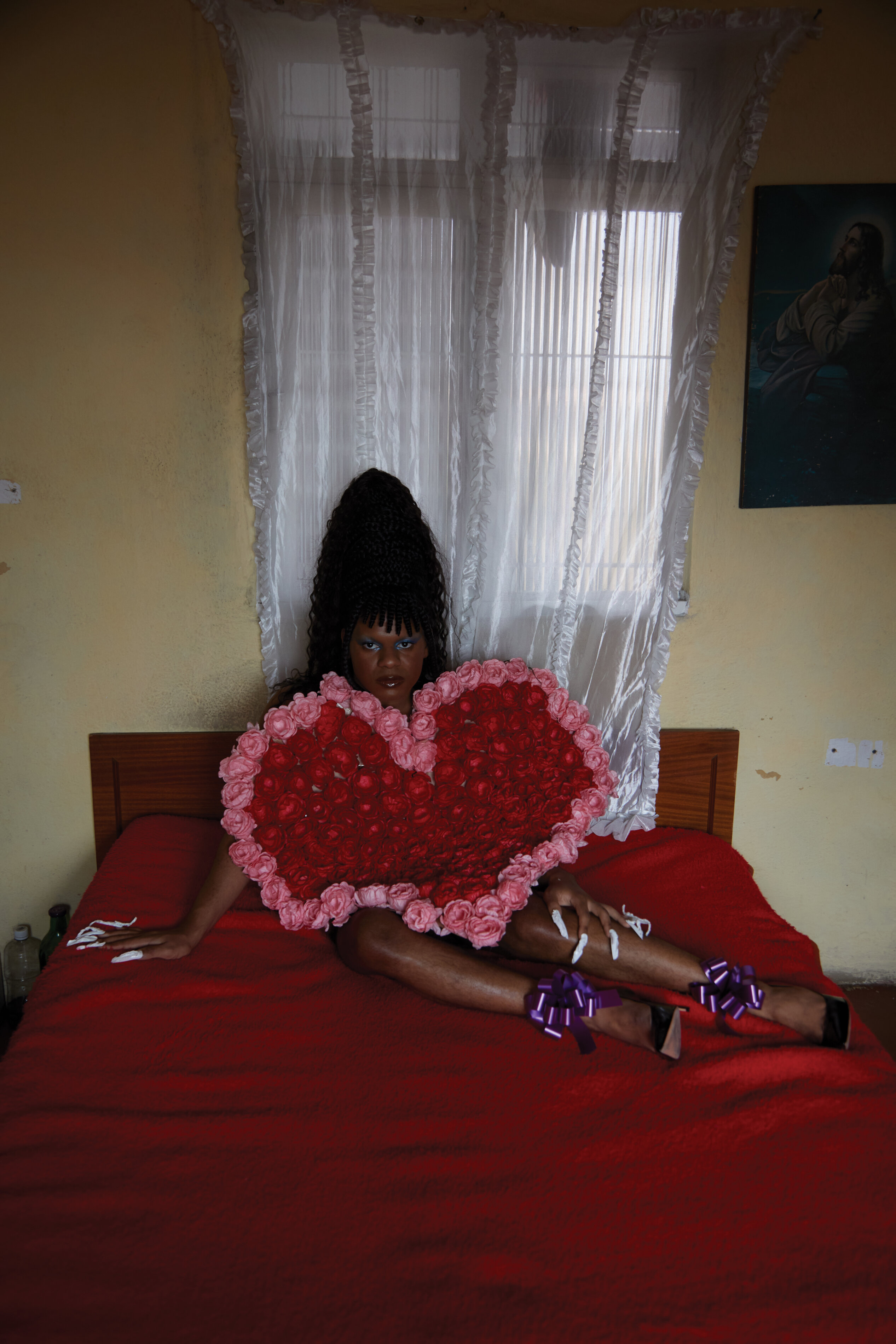 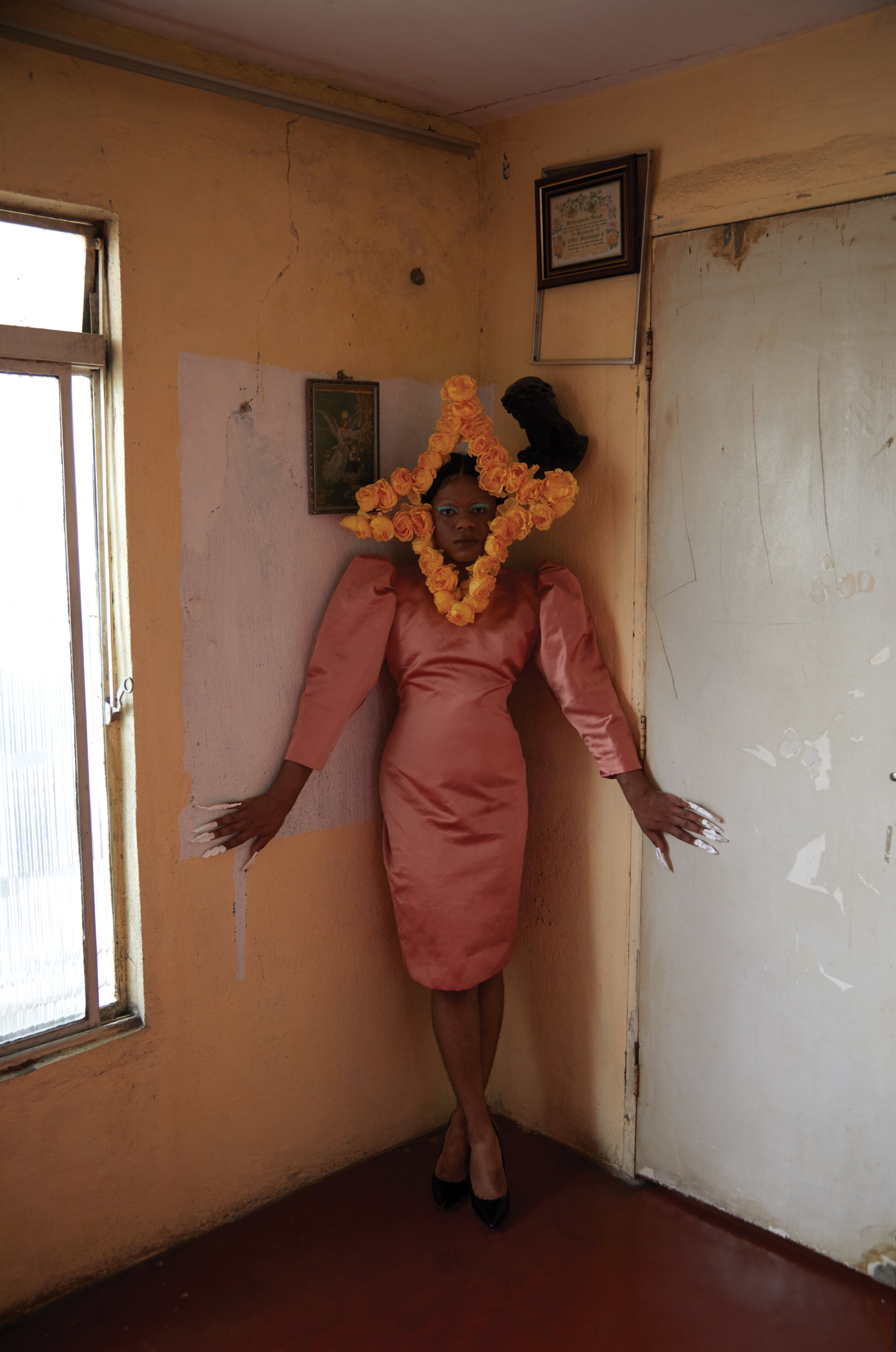 While the mediums by which Ode chooses to express herself are far reaching and multi-faceted, the driving force behind all of her work is constant and unwavering. “My work is a practical exercise in therapy and arises from what I need to resolve with myself at the time I am commissioned or start working on an independent project,” says Ode. “Through the process of creating some of my recent works, I really began to understand the message I want to send out to the world: I want to tell Brazilian stories without them being filtered through a Western or Eurocentric lens. Too often, Brazilian stories and identities are defined by our colonizers.”

While striving to define “Brazilianess” through art may sound like a tall order, Ode believes the best way to explore the topic is to delve deep into memories, symbols, and the physical reality of the body itself. She also takes great inspiration from seeing many artists around her who create work exploring their Latin American ancestry, and who use images and iconographies that are very similar to things she saw around her grandmother’s house during her childhood. For example, when Ode directed and styled the cover for singer Assucena’s new single Parti do Alto (Visualizer), she referenced the photograph Virgen de Los Angeles (1987) taken by Mexican photographer Flor Garduño.

Ode is constantly studying and researching “Brazilian iconographies that challenge Western perceptions, which generally ignore the Global South as part of Latin American life.” Through this research, an important topic that has arisen for the artist is religion and sacred signs and symbols, which feature prominently in her work. For instance, when Ode “had the honor” of styling the legendary Brazilian travesti Marcinha do Corintho for a recent issue of French feminist magazine Censored, she covered her in iconographies of saints she’d seen around her hometown. “It’s common to see images of travestis and trans women in the news being beaten up, killed, and demonized. I wanted to explore a different narrative: to show that travestis can be alive, grow old, leave a legacy, be victorious, and be seen as sacred.”

Ode’s relationship Christianity—which was introduced to Brazil at the beginning of the 16th century by Jesuits missionaries and Portuguese colonizers—began when she was baptized in her parents hometown of Itajubá in Minas Gerais only 1 month into her life. “Everything in Brazil is grounded in and justified by Christian values and belief systems,” she says. “It took me years to realize the amount of poison that accumulated in me because of the gospel and its teachings, and how this negatively affected my family. Today, I reference religious imagery in order to address the fear and guilt—and also the love and hope—that surrounds my relationship with the church.”

References to religion are also evident in the images of Ode featured in this article, which were captured especially for COLORS during two photoshoots in the Cidade Martins neighborhood and the Favela do Cocaia in the city of Guarulhos. Shot by photographers Cassia Tabatini and Gabriel Cupaiolo, both photoshoots were styled and art directed by Ode herself. “The image where I’m wearing a pink dress and a star-shaped headpiece of yellow roses alludes to the clothes that Brazilian children’s choirs wear on festive dates—such as Christmas and Mother’s Day—in churches and schools,” says Ode. “Also, the image of the angel is an ode to the little plaster angels that adorned the walls of my childhood bedroom, just as they adorn homes across the country to this day,” she adds.

Ode also invited various friends to be part of the shoot, including her best friend Edgar, the actor Lucas Leto, Alanda Monteiro, a beautician she met in her hometown, and the renowned trans Brazilian singer Urias. “In Brazil, it is common to say a prayer before you go to sleep. My favorite has always been the one directed to divine beings which we call guardian angels. It goes: divine mercy, always rules, guards, governs, and enlightens me. Amen,” explains Ode. “Therefore, the picture of Urias painted in gold, wearing a piece in the shape of a harp, represents what I imagine these angels look like.” 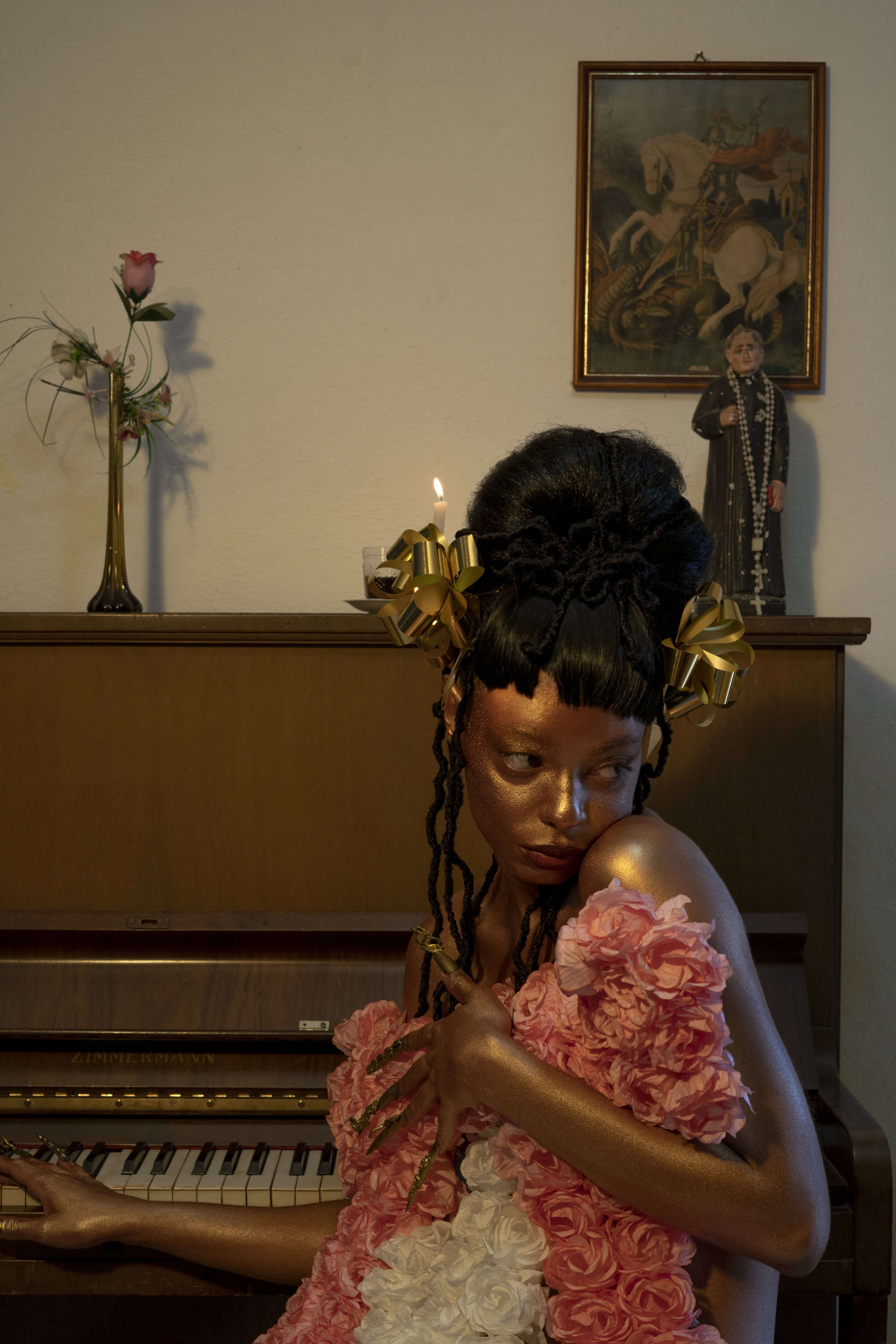 Urias is a transgender Brazilian singer and another friend that Ode chose to style for this photoshoot. 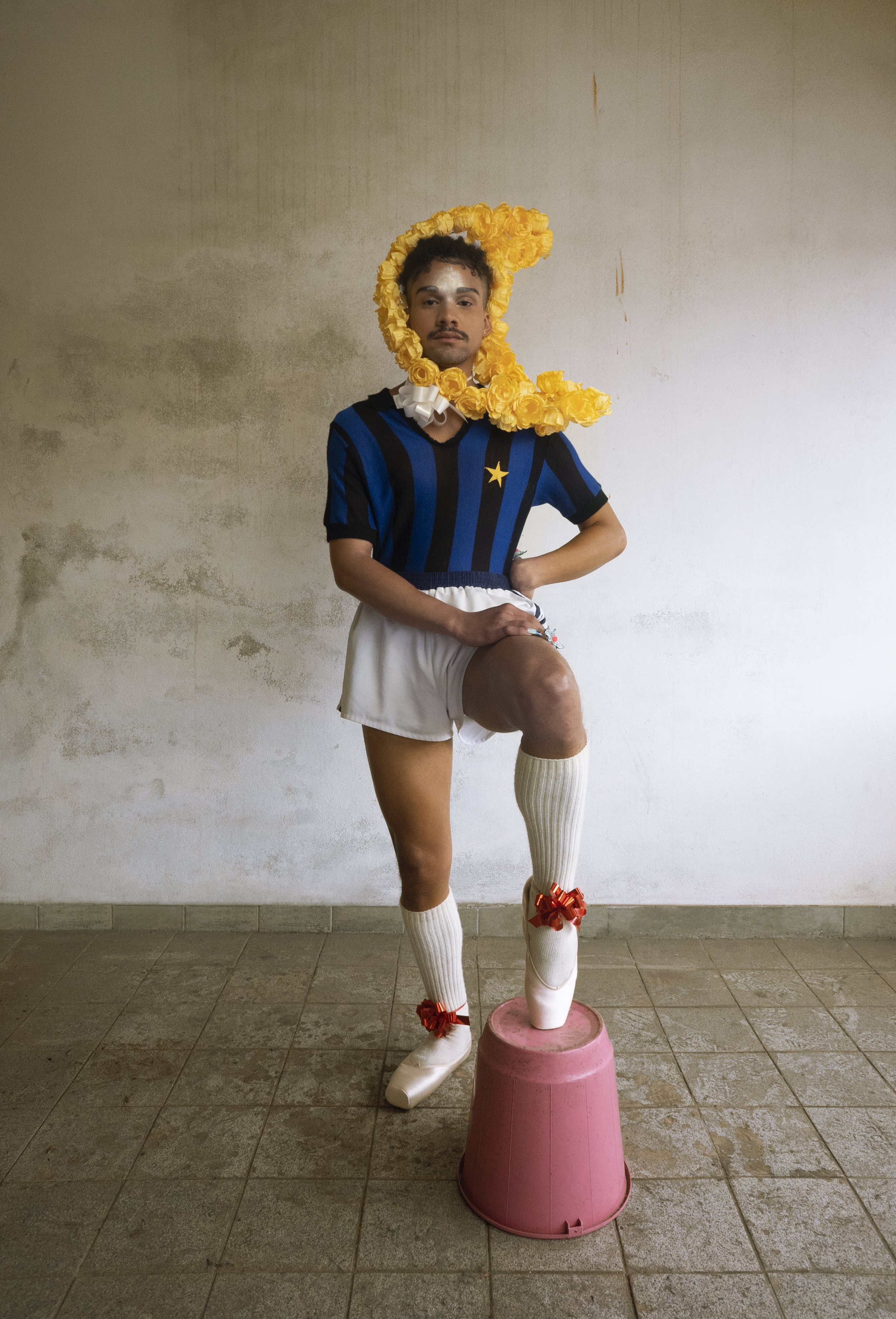 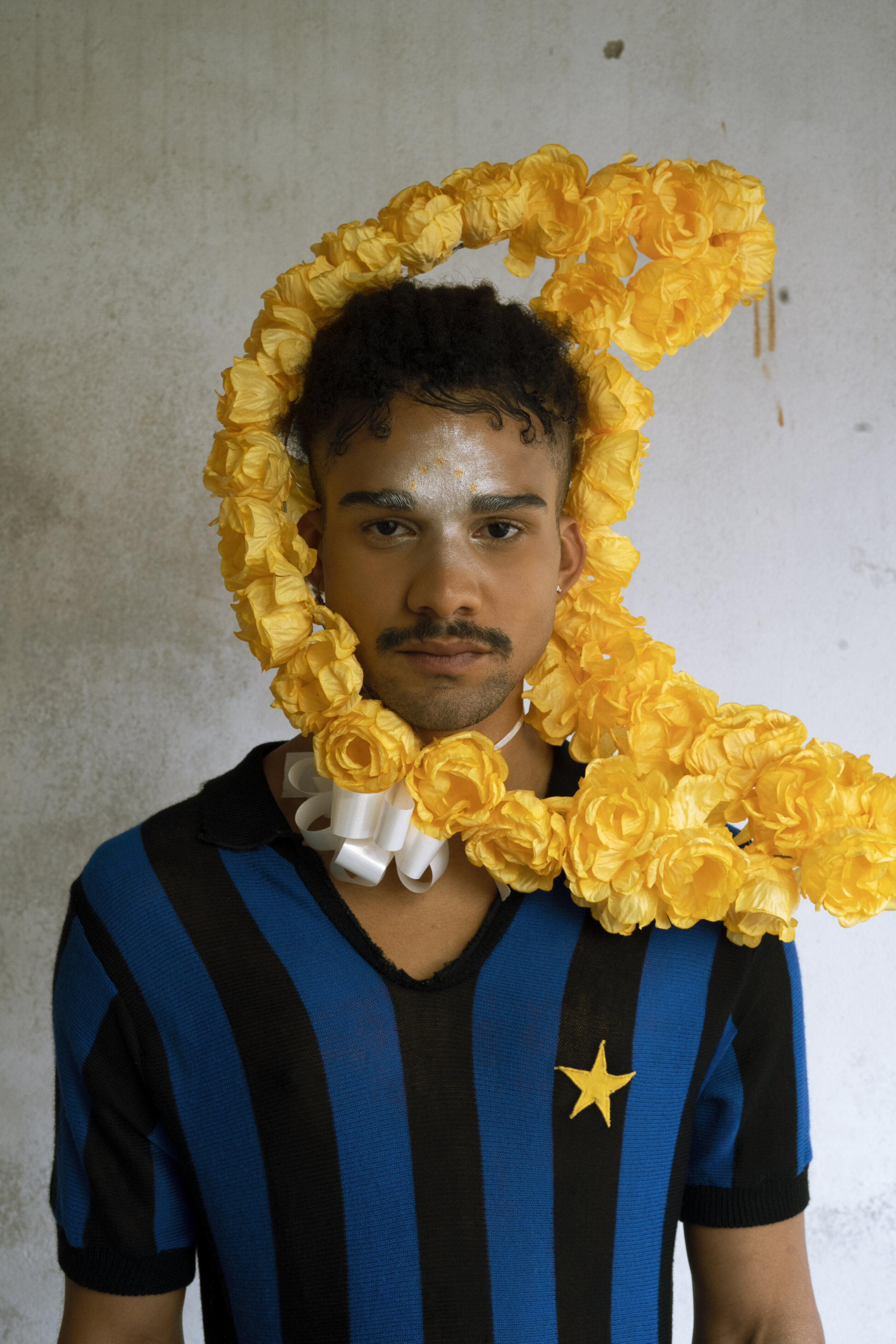 Alongside her quest to explore Brazilian identity, Ode also notably represents travestis—a South American gender identity—through her work. As previously mentioned, this representation is evident in Ode’s film Restituição. “There is no text or speech in Restituição to reflect the fact that the word travesti is impossible to define through language. Instead, it is made up of everyday sounds such as music I heard playing at my neighbors’ house, an acoustic version of the song Novo Mundo by Yndi, a Franco-Brazilian friend of mine—as well as a COLORS alumnus—and Wonder by Cláudia Wonder, who throughout the song repeats a phrase in French meaning that everything will be fine.” As with all of Ode’s other works, Restituição is deeply personal and reflects on the artist’s own experiences. “Similar to the experiences of other travestis, my childhood memories are synonymous with pain and loneliness. our present and future is infinitely happier: we dream of a place where travestis can exist without fear, judgment, or shame,” she says. “It is all about building new stories.”

“There is one thing that is not negotiable, and never will be: my life in abundance.” 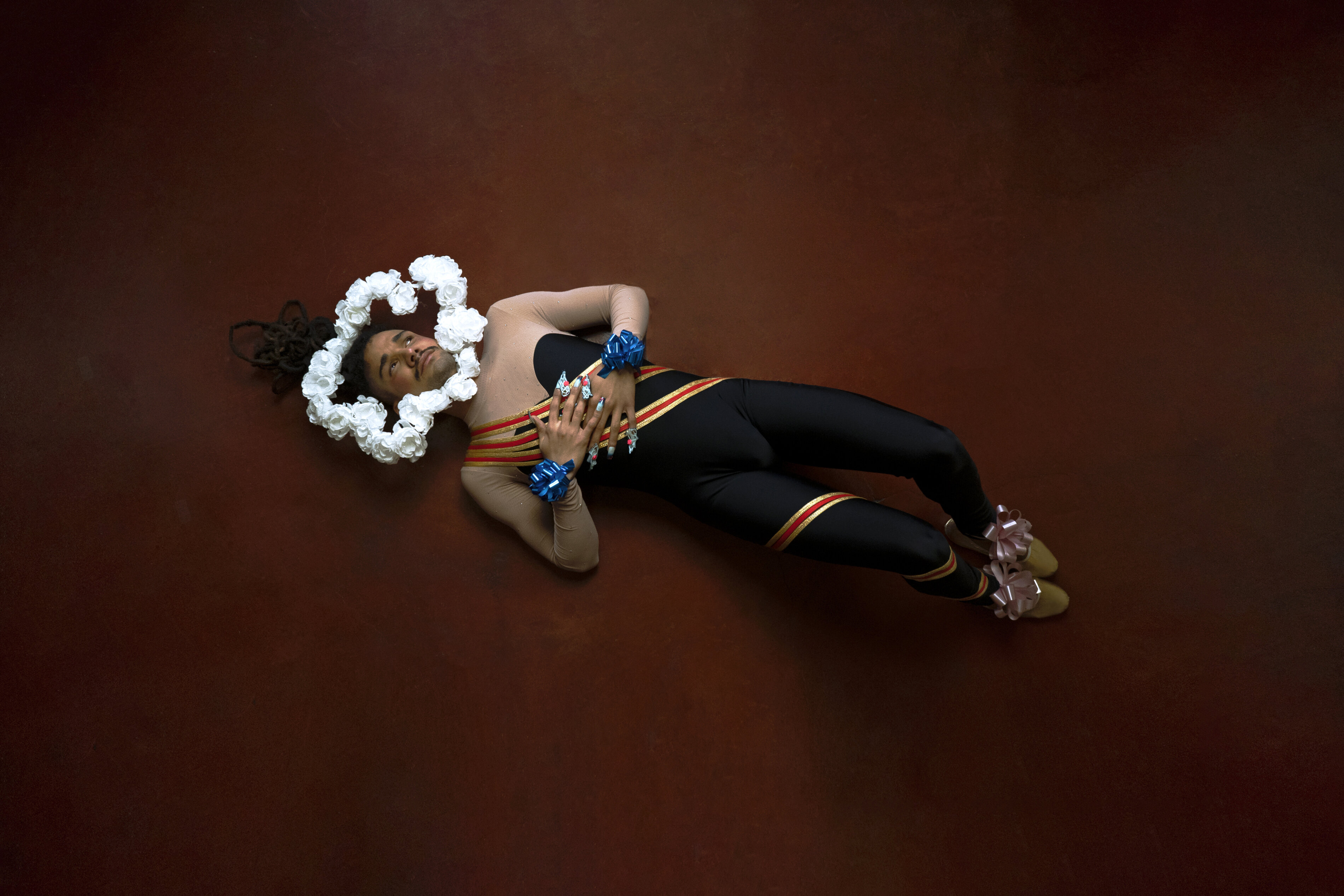 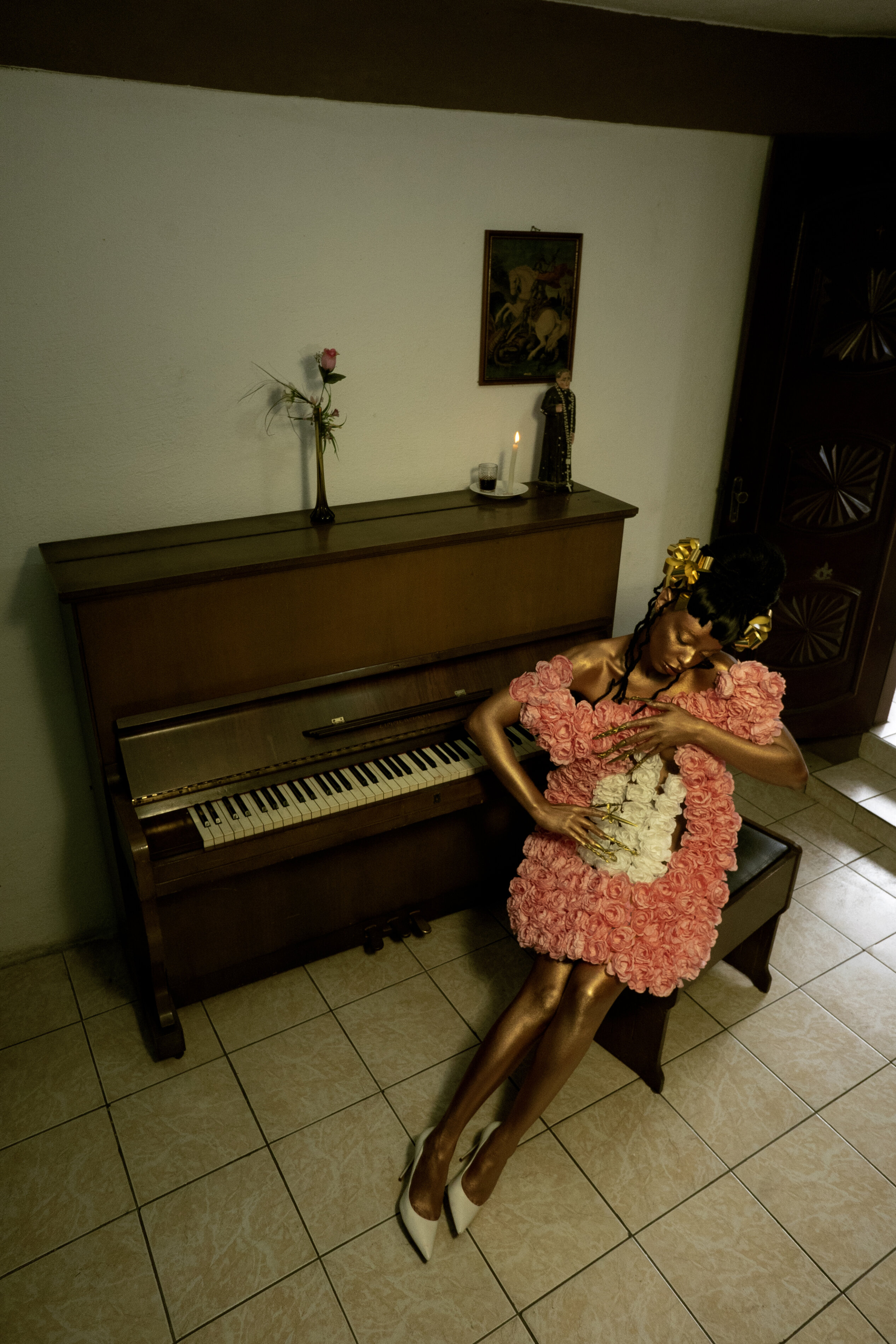 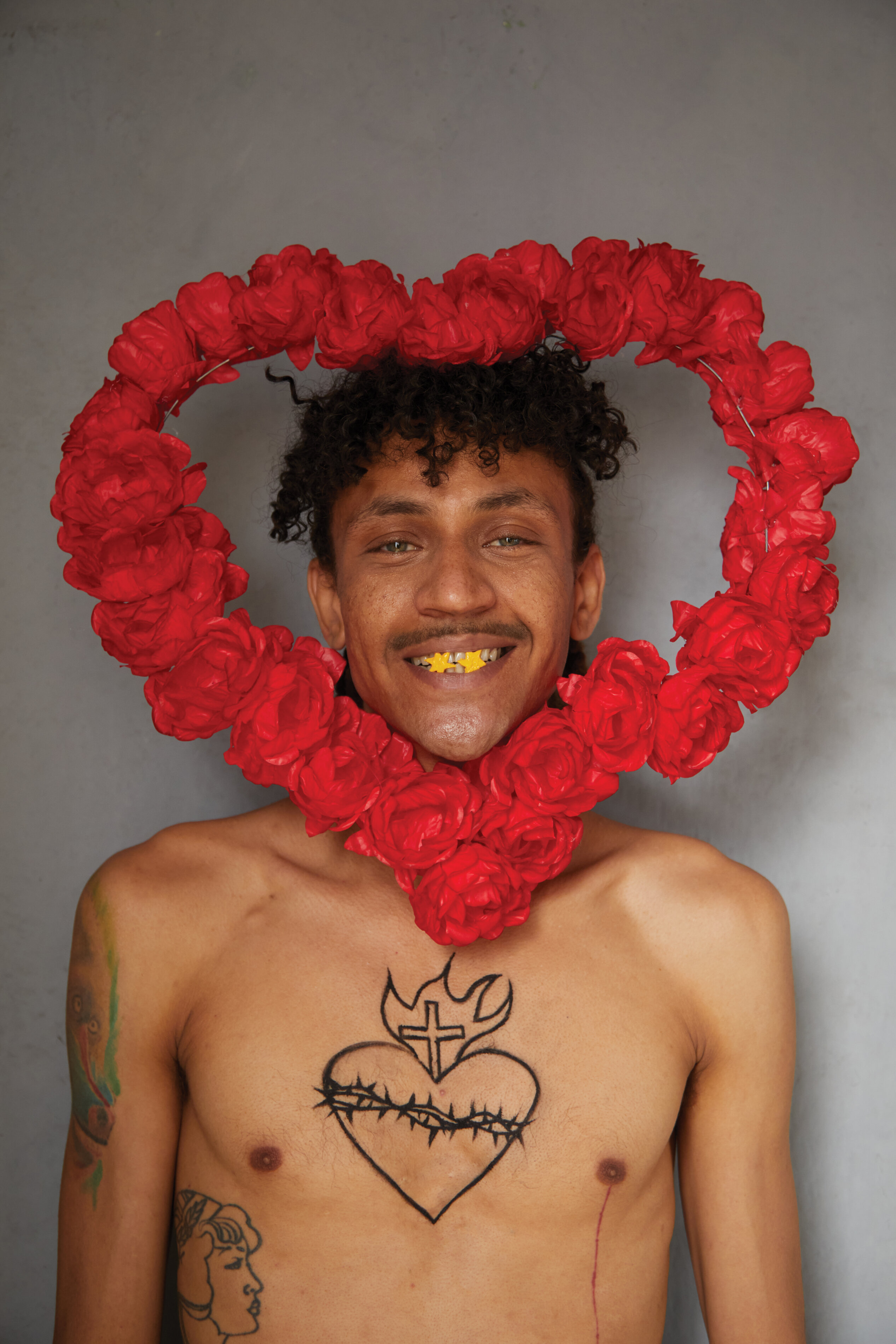 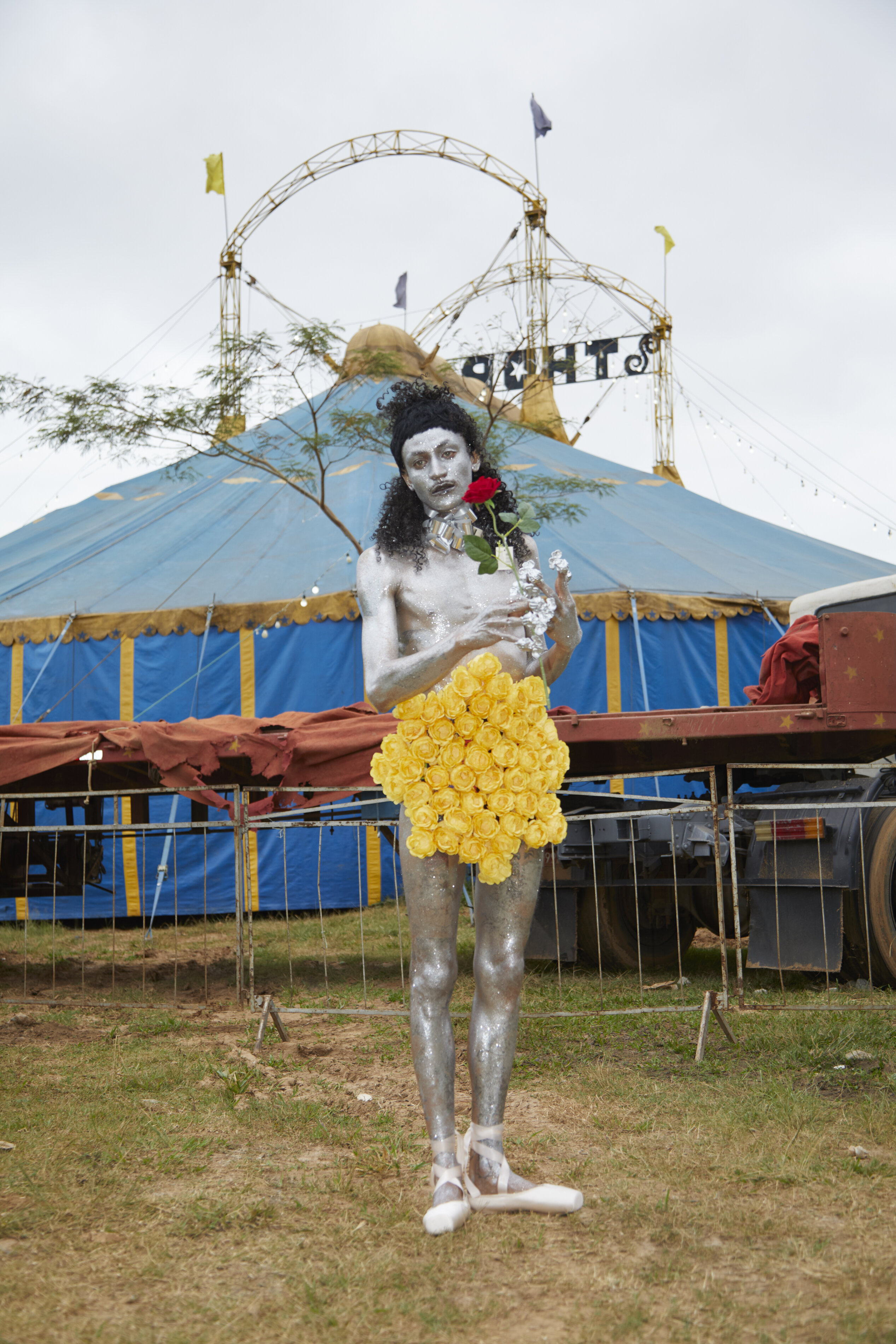 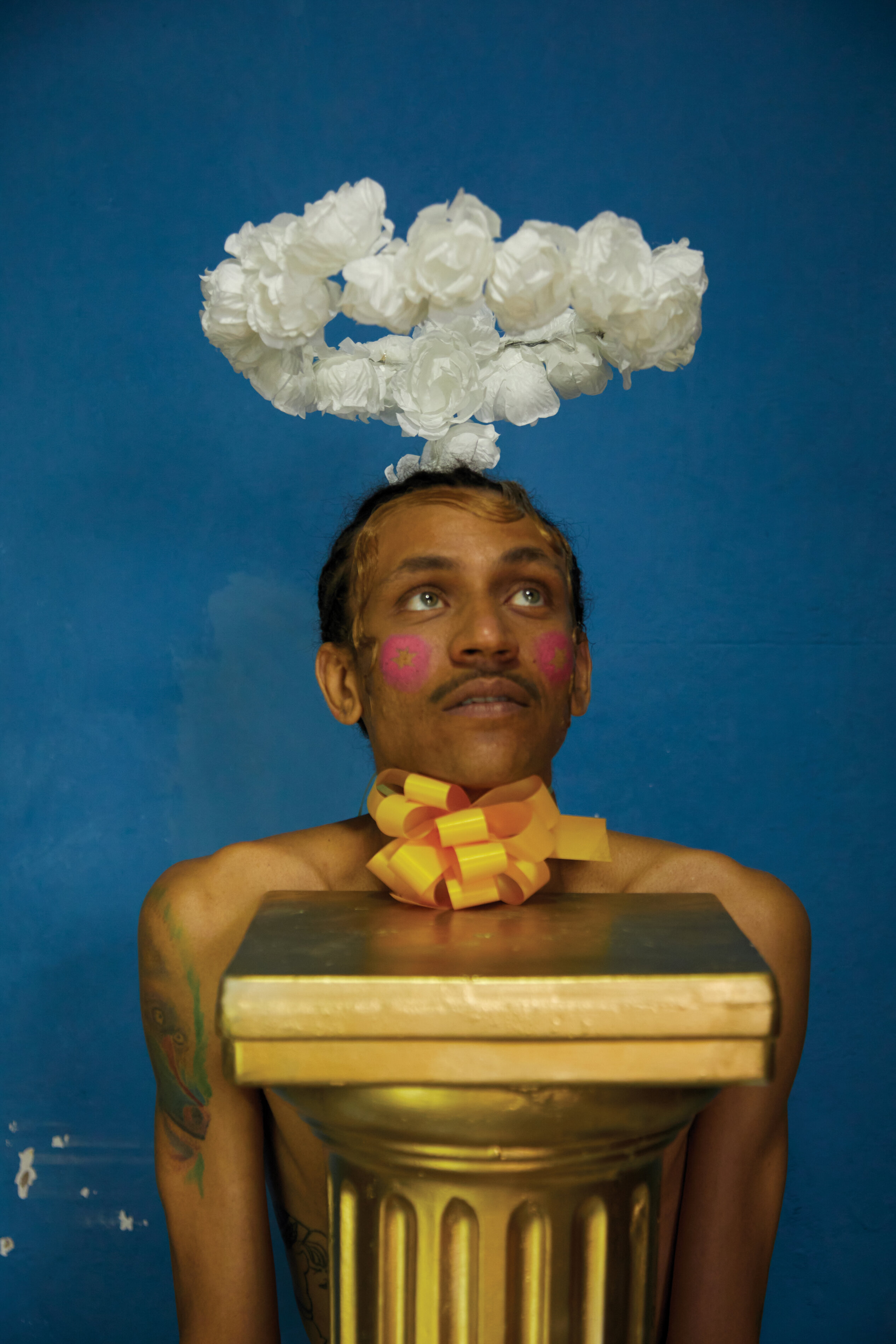 Whether exploring notions of Brazilian identity, or representing the travesti community, Ode creates her work to address the harsh realities of the context she lives in: a country which lives with a history and solid structures of colonization, and in which LGBTQIA+ communities suffer prejudice, harassment, and physical violence on a regular basis. Despite this, Ode is hopeful and dreams of a bright future. “I want to live in safety, have a solid career substantiated by consistent and honest methods of production, and have financial and mental stability. This is currently impossible in Brazil,” she says. “When I’m negotiating with clients, or people I work with, there are times when I have to make concessions about what I want or expect. But there is one thing that is never negotiable, and never will be: my life in abundance.”

Ode is a curator, writer, stylist, and director based in São Paulo. Her work explores a wide range of themes, including racism, transphobia, the body, saudade—a deep emotional state of nostalgic or profound melancholic longing for something or someone—affective memory, therapy, and transmutation. To find out more about her work, check out her Instagram page.

This interview was published as part of COLORS’ editorial coverage running alongside our 2021 production period in Brazil. Discover some of the Brazilian artists we’ve produced shows with on our YouTube channel, or read more articles about the Afro-Brazilian religion  CANDOMBLÉ, the transgender politician and activist ERIKA HILTON, and female baile funk DJs and MCs (including TASHA AND TRACIE OKEREKE, MC DRICKA, and Iasmin Turbininha) on our editorial platform.